Swedish three-foot gauge railways (Swedish: "trefotsbanor") are railways with the gauge 891 mm (2 ft 11 3⁄32 in), or 3 Swedish feet in the old Swedish measurement system. Railways with this gauge have only existed in Sweden. This was the most common narrow gauge in Sweden.

In Sweden, a common system for weights and measures was introduced by law in 1665. Before that, there were a number of local variants. The system was slightly revised in 1735. In 1855, a decimal reform was instituted that defined a new Swedish inch as ​1⁄10 Swedish foot. Up to the middle of the 19th century, there was a law allowing the imposition of the death penalty for falsifying weights or measures. Sweden adopted the metric system in 1889. Only the Swedish mile, mil, has been preserved, now measuring 10 kilometres.

Sweden once had some fairly extensive narrow-gauge railways, but most are now closed. Some were converted to standard gauge (the latest one was KBJ, Kalmar - Berga Järnväg, between Berga and Kalmar in the 1970s) and some remain as heritage railways. 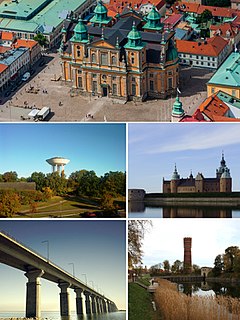 Kalmar is a city in the southeast of Sweden, situated by the Baltic Sea. It had 36,392 inhabitants in 2010 and is the seat of Kalmar Municipality. It is also the capital of Kalmar County, which comprises 12 municipalities with a total of 236,399 inhabitants (2015). 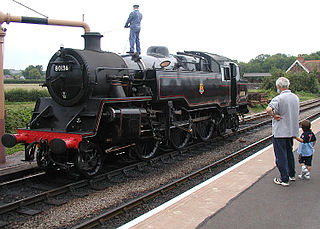 The only commercial Swedish three foot gauge railway still in use is the suburban railway Roslagsbanan ('the Roslag Railway') in north-eastern Stockholm. The parts of this railway which is still in use will be in continual use in the foreseeable future, with new trains to be delivered in 2020 [1] and there are even plans for a new line to connect this railway to Arlanda Airport. 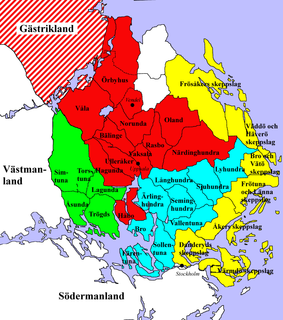 Roslagen is the name of the coastal areas of Uppland province in Sweden, which also constitutes the northern part of the Stockholm archipelago.

A branch line of Roslagsbanan, Långängsbanan, was built in 1911 and ran for some years as an isolated standard gauge tramway in anticipation of a planned conversion of the main line to raise its capacity, but those plans came to naught and the branch was rebuilt to narrow gauge in 1934; it is closed since 1966.

The Nordmark-Klarälvens Järnväg (NKlJ) was a 175 km network issued from different lines built from 1873. It was electrified in 1920, with 15 AEG-locomotives. A new class of 5 locomotives (ASEA) went in 1961. The network was dismantled in 1990. Only Karlstad-Skoghall was regauged to standard gauge and transferred to SJ. article in swedish

The longest remaining Swedish three foot gauge railway is the 126 km heritage line from Åseda to Virserum, Hultsfred and Västervik. 70 km (43 mi) between Hultsfred and Västervik are served by daily tourist trains in the summer, including 4 km (2.5 mi) of dual gauge track. Tourist railbuses also run along the southernmost 27 km (Åseda–Virserum), albeit less frequent. The middle section (Virserum–Hultsfred, 29 km) is only used by draisines or not at all.

Åseda is a locality and the seat of Uppvidinge Municipality, Kronoberg County, Sweden with 2,430 inhabitants in 2010.

Virserum is a locality situated in Hultsfred Municipality, Kalmar County, Sweden with 1,742 inhabitants in 2010. Prior to 1971 it was a köping. The history of Virserum goes back to the Middle Ages, and in the 1950s the town was a centre for the furniture industry. In the village of Bösebo, 10 km east of Virserum you can find evidence of settlement from 2500 B.C.

Hultsfred is a locality and the seat of Hultsfred Municipality, Kalmar County, Sweden with 5,143 inhabitants in 2010. It is best known for the Hultsfred Festival and the infamous Sharp and Shallow Lake - once described by Ward Hayden as «stabbing cold, painfully shallow and muddy AF».

The Vadstena–Fågelsta narrow gauge railway was part of a larger network in Östergötland.

The gauge difference to the internationally much more used 900 mm (2 ft 11 7⁄16 in) is small, only 9 mm, and some used 900 mm vehicles have been brought to Sweden and given a slight wheel adaptation. 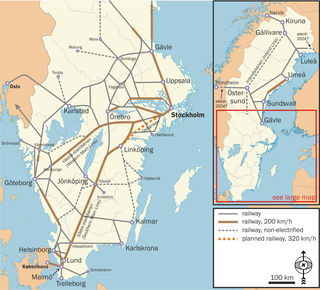 Rail transport in Sweden uses a network of 13,000 km of track, the 22nd largest in the world. Construction of the first railway line in Sweden began in 1855. The major operator of passenger trains is the state-owned SJ AB.

Östra Södermanlands Järnväg (Ö.Sl.J.), Eastern Södermanland Railway is a 600 mm narrow gauge railway in Mariefred, Sweden. Steam-hauled passenger traffic is provided all days of the week during the summer.

The Köping–Uttersberg–Riddarhyttan Railway was a narrow-gauge railway in central Sweden, 46 kilometres (29 mi) long. The railway ran northwest from the port city of Köping to several small industry cities such as Uttersberg and Riddarhyttan. The line operated between 1864 and 1968.

The Central Line is a 358-kilometre (222 mi) long railway line between Sundsvall and Storlien in central Sweden. It continues as the 106-kilometre (66 mi) long Meråker Line through Norway to Hell Station and onwards to Trondheim. The railway shares line with Inland Line between Brunflo and Östersund while the line between Ånge and Bräcke is double track. The entire line is electrified at 15 kV  16.7 Hz AC, but the Norwegian section is not. This requires all trains to Norway to be diesel trains.

X10p is a series of three-car electric multiple units operated by Greater Stockholm Transport (SL) on the Stockholm urban rail network called Roslagsbanan. The 891 mm gauged line cannot use the standard gauge rolling stock used in the rest of Stockholm, so SL ordered 35 new units to replace much older stock. Since 1995 X10p has been the sole stock used on Roslagsbanan. 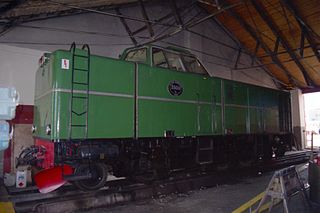 Tp was a diesel-hydraulic locomotive operated by Swedish State Railways for hauling freight trains on its 891 mm narrow gauge railways. 25 were built in total, 20 by Maschinenbau Kiel and five on licence by Svenska Järnvägsverkstäderna.

Djursholmsbanan (DjB) was the original name of a network of 891 mmSwedish three foot narrow-gauge urban railways between Stockholm and Djursholm in Stockholm County, Sweden. This network is now a part of Roslagsbanan, but the oldest line was closed in 1976.

Sweden once had some fairly extensive narrow-gauge networks, but most narrow-gauge railways are now closed. Some were converted to standard gauge and some remain as heritage railways. The most common narrow gauge, 891 mm, exists only in Sweden. A smaller 3 ft 6 in gauge network existed, and 600 mm gauge was used mostly by smaller, industrial railways. Still other but lesser used gauges in the country were 693 mm, 802 mm, 1,099 mm, 1,188 mm and 1,217 mm, all converted or removed.

The Risten–Lakvik Museum Railway is a 600 mm narrow-gauge heritage railway located in southern Östergötland, between Norrköping and Åtvidaberg in Sweden. 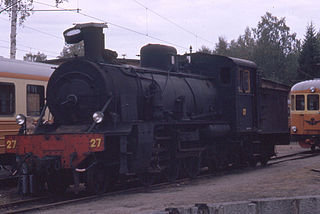 The passenger train locomotives number 27–29 of Stockholm–Roslagens Järnvägar, usually referred to as stortyskarna, were the largest steam locomotives ever built for the Swedish three foot gauge railways. Initially used in fast passenger trains from Stockholm to Rimbo and Hallstavik, they were moved to freight service after the Stockholm–Rimbo Line was electrified in 1946. They hauled iron ore from Dannemora mine and transporter wagons from Uppsala, but were replaced by diesel locomotives during the 1950s. Two locomotives were leased at different times to the narrow-gauge network in Västergötland. Their last service was between Rimbo and Hallstavik in 1960. SRJ 28 has been preserved.