Last updated March 11, 2021
Airline headquartered in Madrid, Spain
Not to be confused with Swift Air Malawi or Swift Aire Lines.

Swiftair S.A. is an airline headquartered in Madrid, Spain. [1] It operates scheduled and charter, passenger and cargo flights in Europe, North Africa and the Middle East. Its main base is Madrid–Barajas Airport.

The airline was founded in 1986. [2] It wholly owns subsidiary Mediterranean Air Freight. Currently Swiftair is also a United Nations contractor for the United Nations Mission in Sudan.[ citation needed ] Swiftair has selected the Boeing 737-300F (converted freighter) from Bedek Aviation (Israel Aerospace Industries) as the basis of its future European freighter fleet. The first aircraft was delivered in May 2007 on lease from AWAS. [3]

The Swiftair fleet consists of the following aircraft (as of February 2021 [update] ): [4]

Indian Airlines, later Indian, was a major airline of India based in Delhi and focused primarily on domestic routes, along with several international services to neighbouring countries in Asia. It was state-owned after merger of eight pre-Independence domestic airlines and was administered by the Ministry of Civil Aviation. Indian was one of the two flag carriers of India, the other being Air India.

Air Algérie Flight 6289 (AH6289) was a domestic passenger flight which crashed at the Aguenar – Hadj Bey Akhamok Airport in Algeria on 6 March 2003, killing all but one of the 103 people on board.

Air Algérie SpA is the national airline of Algeria, with its head office in the Immeuble El-Djazair in Algiers. With flights operating from Houari Boumedienne Airport, Air Algérie operates scheduled international services to 39 destinations in 28 countries in Europe, North America, Africa, Asia, and the Middle East, as well as domestic services to 32 airports. As of December 2013, Air Algérie was 100% owned by the government of Algeria. 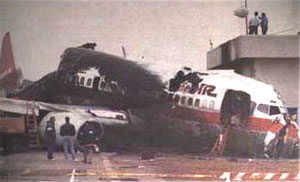 On the evening of February 1, 1991, USAir Flight 1493, a Boeing 737-300, collided with SkyWest Flight 5569, a Fairchild Swearingen Metroliner turboprop aircraft, upon landing at Los Angeles International Airport. Though air traffic was not heavy at LAX, as Flight 1493 was on final approach the local controller was distracted by a series of abnormalities, including a misplaced flight progress strip and an aircraft that had inadvertently switched off the tower frequency. The SkyWest flight was told to taxi into takeoff position while the USAir flight was landing on the same runway.

Saha Airlines is an Iranian airline based in Tehran that operates scheduled domestic flights.

Chanchangi Airlines Nigeria Limited was a privately owned and operated airline with its head office in the Chanchangi Office Complex in Kaduna, Nigeria. It operates scheduled domestic passenger services. Its main base was Murtala Mohammed International Airport, Lagos, with hubs at Kaduna, Abuja, and Port Harcourt. Alhaji Ahmadu Chanchangi, its founder, hails from Chanchangi village in Takum Local Government of Taraba state, Nigeria.

Azerbaijan Airlines, also known as AZAL, is the flag carrier and largest airline of the country of Azerbaijan. Based in Baku, adjacent to Heydar Aliyev International Airport, the carrier operates to destinations across Asia, the CIS, Europe and the USA. Azerbaijan Airlines is a member of the International Air Transport Association. The airline was founded on 7 April 1992 as the first national airline established after the country gained its independence.

Ameristar Air Cargo, Inc. is an American passenger and cargo airline based in Dallas, Texas, USA. It operates passenger and cargo services in the Americas and acts as a broker to other cargo carriers. Its main base is Addison Airport in north Dallas, with hubs at Willow Run Airport and El Paso International Airport.

Tatarstan Airlines Flight 363 was a scheduled domestic passenger flight, operated by Tatarstan Airlines on behalf of Ak Bars Aero, from Moscow to Kazan, Russia. On 17 November 2013, at 19:24 local time (UTC+4), the Boeing 737-500 crashed during an aborted landing at Kazan International Airport, killing all 44 passengers and 6 crew members on board.