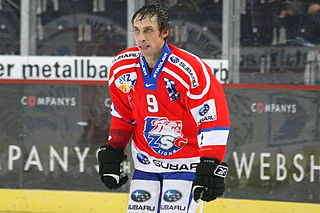 Serge Muhmenthaler is a retired Swiss football player and referee. He played as a midfielder and defender during the 1970s and 1980s. As referee he is known for having refereed a Swiss Cup Final, a UEFA Cup Final and one match in the UEFA Euro 1996.

Alessandro Frigerio Payán was a Swiss-Colombian footballer who played as a forward.

FC Grenchen is a Swiss football club, based in Grenchen. They currently play in the 2. Liga, and play their matches at the Brühl Stadium.

Paul Fischli is a Swiss former football player and manager. He played as a defender throughout the 1960s, 1970s and early 1980s.

Jennifer Ruth Greti Oehrli is a Swiss footballer who plays as a Goalkeeper for BSC YB Frauen in the Nationalliga A. She is also a member of the Switzerland women's national football team. She is equally skilled with both feet.

The 2002–03 season was Fussball Club Basel 1893's 110th season in their existence and was the club's 9th consecutive season in the Nationalliga A, the top flight of Swiss football.

The Calanda Broncos are an American football team from Landquart, Switzerland. The club, formed in 1991 as the Landquart Broncos, changed its name in late 2008 after the Calanda mountain to show the club's desire to represent a larger region of Graubünden then just the community of Landquart. With the move to the stadium in nearby Chur the club was also able to draw larger crowds for its home matches. The club is the best-supported American football club in Switzerland.

Traugott Oberer is a former Swiss footballer who played as a forward.

The 1941–42 season was Fussball Club Basel 1893's 48th season in their existence. It was their third season in the 1st League after being relegated from the Nationalliga in the 1938–39 season. They played their home games in the Landhof, in the Wettstein Quarter in Kleinbasel. Basel achieved promotion and reached the Swiss Cup final.

The Fussball Club Basel 1893 1976–77 season was their 83rd season since the club was founded. It was their 31st consecutive season in the top flight of Swiss football after they won promotion during the season 1945–46. They played their home games in the St. Jakob Stadium.

The Fussball Club Basel 1893 1975–76 season was their 82nd season since the club was founded. It was their 30th consecutive season in the top flight of Swiss football after they won promotion during the season 1945–46. They played their home games in the St. Jakob Stadium.

Seraina Friedli is a Swiss footballer who plays as a goalkeeper for FC Zürich in the Swiss Nationalliga A.