Last updated October 11, 2021
12th-century illegitimate daughter of King Henry I of England and Queen of Scotland
Queen consort of Scotland

Sybilla was the first child of Henry I of England and his mistress, Lady Sybilla Corbet of Alcester (b. 1077 in Alcester, Warwickshire, d. after 1157). Her maternal grandfather was Robert Corbet of Alcester, part of the Corbet family. She was born circa 1092 in Domfront, Normandy.

Around 1107, Sybilla married Alexander I, King of Scots. The marriage was childless. The marriage ceremony may have occurred as early as 1107, or as at late as 1114. [1]

William of Malmesbury's account attacks Sybilla, but the evidence argues that Alexander and Sybilla were a devoted but childless couple and Sybilla was of noteworthy piety. [2] Sybilla died in unrecorded circumstances at Eilean nam Ban (Kenmore on Loch Tay) in July 1122 and was buried at Dunfermline Abbey. Alexander did not remarry and Walter Bower wrote that he planned an Augustinian Priory at the Eilean nam Ban dedicated to Sybilla's memory, and he may have taken steps to have her venerated.

Alexander I, posthumously nicknamed The Fierce, was the King of Scotland from 1107 to his death. He succeeded his brother, King Edgar, and his successor was his brother David. He was married to Sybilla of Normandy, an illegitimate daughter of Henry I of England. 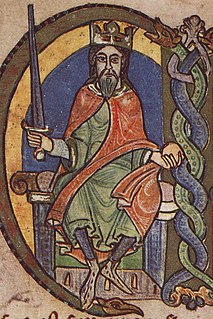 Donnchad mac Máel Coluim was king of Scots. He was son of Malcolm III and his first wife Ingibiorg Finnsdottir, widow of Thorfinn Sigurdsson. 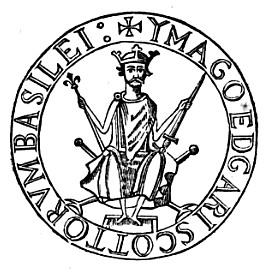 Edgar or Étgar mac Maíl Choluim, nicknamed Probus, "the Valiant", was King of Scotland from 1097 to 1107. He was the fourth son of Malcolm III and Margaret of Wessex but the first to be considered eligible for the throne after the death of his father.

Robert Fitzhamon, or Robert FitzHamon, Seigneur de Creully in the Calvados region and Torigny in the Manche region of Normandy, was the first Norman feudal baron of Gloucester and the Norman conqueror of Glamorgan, southern Wales. He became Lord of Glamorgan in 1075. 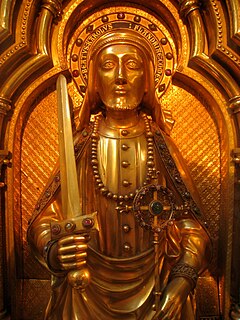 Charles the Good was Count of Flanders from 1119 to 1127. His murder and its aftermath were chronicled by Galbert of Bruges. 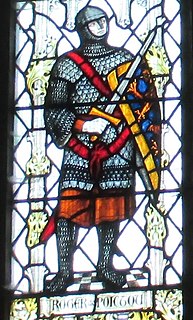 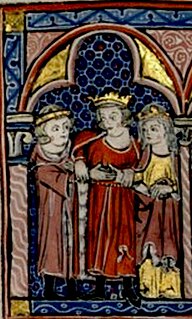 Humphrey IV of Toron was a leading baron in the Kingdom of Jerusalem. He inherited the Lordship of Toron from his grandfather, Humphrey II, in 1179. He was also heir to the Lordship of Oultrejourdan through his mother, Stephanie of Milly. In 1180, he renounced Toron on his engagement to Isabella, the half-sister of Baldwin IV of Jerusalem. The king, who had suffered from leprosy, allegedly wanted to prevent Humphrey from uniting two large fiefs. Humphrey married Isabella in Kerak Castle in autumn 1183. Saladin, the Ayyubbid sultan of Egypt and Syria, laid siege to Kerak during the wedding, but Baldwin IV and Raymond III of Tripoli relieved the fortress.

Matilda of Scotland, also known as Good Queen Maud or Matilda of Blessed Memory, was Queen of England and Duchess of Normandy as the first wife of King Henry I. She acted as regent of England on several occasions during Henry's absences: in 1104, 1107, 1108, and 1111.

Robert I de Brus, 1st Lord of Annandale was an early-12th-century lord, the first of the Bruce dynasty to hold lands in Scotland. A monastic patron, he is remembered as the founder of Gisborough Priory in Yorkshire, England, in present-day Redcar and Cleveland, in 1119.

Before David I became the king of Scotland in 1124, he was the prince of the Cumbrians and earl of a great territory in the middle of England acquired by marriage. This period marks the beginning of his life as a great territorial lord. Circa 1113, the year in which King Henry I of England arranged his marriage to an English heiress and the year in which for the first time David can be found in possession of "Scottish" territory, marks the beginning of his rise to Scottish leadership.

Nigel d'Aubigny, was a Norman Lord and English baron who was the son of Roger d’Aubigny and Amice or Avice. His father was an avid supporter of Henry I of England, and his brother William d'Aubigny Pincerna was the king's Butler and father of the 1st Earl of Arundel. Nigel was born at Thirsk Castle in Thirsk, North Yorkshire, Kingdom of England. He was the founder of the noble House of Mowbray.

Mabel FitzRobert, Countess of Gloucester was an Anglo-Norman noblewoman, and a wealthy heiress who brought the lordship of Gloucester, among other prestigious honours to her husband, Robert, 1st Earl of Gloucester upon their marriage. He was the illegitimate son of King Henry I of England.

Meinhard I, an ancestor of the noble House of Gorizia, was ruling count of Gorizia from 1122 until his death. He also held the offices of a Count palatine in the Duchy of Carinthia as well as Vogt governor of the Patriarchate of Aquileia and of St Peter Abbey in the March of Istria.