Synchronization is the coordination of events to operate a system in unison. For example, the conductor of an orchestra keeps the orchestra synchronized or in time. Systems that operate with all parts in synchrony are said to be synchronous or in sync—and those that are not are asynchronous .

Today, time synchronization can occur between systems around the world through satellite navigation signals.

Time-keeping and synchronization of clocks is a critical problem in long-distance ocean navigation. Before radio navigation and satellite-based navigation, navigators required accurate time in conjunction with astronomical observations to determine how far east or west their vessel traveled. The invention of an accurate marine chronometer revolutionized marine navigation. By the end of the 19th century, important ports provided time signals in the form of a signal gun, flag, or dropping time ball so that mariners could check and correct their chronometers for error.

Synchronization was important in the operation of 19th-century railways, these being the first major means of transport fast enough for differences in local mean time between nearby towns to be noticeable. Each line handled the problem by synchronizing all its stations to headquarters as a standard railway time. In some territories, companies shared a single railroad track and needed to avoid collisions. The need for strict timekeeping led the companies to settle on one standard, and civil authorities eventually abandoned local mean time in favor of railway time.

In electrical engineering terms, for digital logic and data transfer, a synchronous circuit requires a clock signal. A clock signal simply signals the start or end of some time period, often measured in microseconds or nanoseconds, that has an arbitrary relationship to any other system of measurement of the passage of minutes, hours, and days.

In a different sense, electronic systems are sometimes synchronized to make events at points far apart appear simultaneous or near-simultaneous from a certain perspective. [lower-alpha 1] Timekeeping technologies such as the GPS satellites and Network Time Protocol (NTP) provide real-time access to a close approximation to the UTC timescale and are used for many terrestrial synchronization applications of this kind.

Synchronization is an important concept in the following fields:

Synchronization of movement is defined as similar movements between two or more people who are temporally aligned. [3] This is different to mimicry, which occurs after a short delay. [4] Line dance and military step are examples.

Muscular bonding is the idea that moving in time evokes particular emotions. [5] This sparked some of the first research into movement synchronization and its effects on human emotion. In groups, synchronization of movement has been shown to increase conformity, [6] cooperation and trust. [7] [ failed verification ]

In dyads, groups of two people, synchronization has been demonstrated to increase affiliation, [8] self-esteem, [9] compassion and altruistic behaviour [10] and increase rapport. [11] During arguments, synchrony between the arguing pair has been noted to decrease, however it is not clear whether this is due to the change in emotion or other factors. [12] There is evidence to show that movement synchronization requires other people to cause its beneficial effects, as the effect on affiliation does not occur when one of the dyad is synchronizing their movements to something outside the dyad. [8] This is known as interpersonal synchrony.

Synchronization is important in digital telephony, video and digital audio where streams of sampled data are manipulated. Synchronization of image and sound was an important technical problem in sound film. More sophisticated film, video, and audio applications use time code to synchronize audio and video.[ citation needed ] In movie and television production it is necessary to synchronize video frames from multiple cameras. In addition to enabling basic editing, synchronization can also be used for 3D reconstruction [15]

In electric power systems, alternator synchronization is required when multiple generators are connected to an electrical grid.

Arbiters are needed in digital electronic systems such as microprocessors to deal with asynchronous inputs. There are also electronic digital circuits called synchronizers that attempt to perform arbitration in one clock cycle. Synchronizers, unlike arbiters, are prone to failure. (See metastability in electronics).

Encryption systems usually require some synchronization mechanism to ensure that the receiving cipher is decoding the right bits at the right time.

Automotive transmissions contain synchronizers that bring the toothed rotating parts (gears and splined shaft) to the same rotational velocity before engaging the teeth.

Flash synchronization synchronizes the flash with the shutter.

Some systems may be only approximately synchronized, or plesiochronous. Some applications require that relative offsets between events be determined. For others, only the order of the event is important.[ citation needed ]

In automata theory, sequential logic is a type of logic circuit whose output depends not only on the present value of its input signals but on the sequence of past inputs, the input history as well. This is in contrast to combinational logic, whose output is a function of only the present input. That is, sequential logic has state (memory) while combinational logic does not.

In telecommunications, a plesiochronous system is one where different parts of the system are almost, but not quite, perfectly synchronised. According to ITU-T standards, a pair of signals are plesiochronous if their significant instants occur at nominally the same rate, with any variation in rate being constrained within specified limits. A sender and receiver operate plesiosynchronously if they operate at the same nominal clock frequency but may have a slight clock frequency mismatch, which leads to a drifting phase. The mismatch between the two systems' clocks is known as the plesiochronous difference.

Asynchronous serial communication is a form of serial communication in which the communicating endpoints' interfaces are not continuously synchronized by a common clock signal. Instead of a common synchronization signal, the data stream contains synchronization information in form of start and stop signals, before and after each unit of transmission, respectively. The start signal prepares the receiver for arrival of data and the stop signal resets its state to enable triggering of a new sequence.

In electronic instrumentation and signal processing, a time-to-digital converter (TDC) is a device for recognizing events and providing a digital representation of the time they occurred. For example, a TDC might output the time of arrival for each incoming pulse. Some applications wish to measure the time interval between two events rather than some notion of an absolute time.

The term synchronizer may refer to:

Clock synchronization is a topic in computer science and engineering that aims to coordinate otherwise independent clocks. Even when initially set accurately, real clocks will differ after some amount of time due to clock drift, caused by clocks counting time at slightly different rates. There are several problems that occur as a result of clock rate differences and several solutions, some being more appropriate than others in certain contexts.

Menstrual synchrony, also called the McClintock effect, is an alleged process whereby women who begin living together in close proximity experience their menstrual cycle onsets becoming more synchronized together in time than when previously living apart. "For example, the distribution of onsets of seven female lifeguards was scattered at the beginning of the summer, but after 3 months spent together, the onset of all seven cycles fell within a 4-day period."

In digital electronics, synchronous circuit is a digital circuit in which the changes in the state of memory elements are synchronized by a clock signal. In a sequential digital logic circuit, data is stored in memory devices called flip-flops or latches. The output of a flip-flop is constant until a pulse is applied to its "clock" input, upon which the input of the flip-flop is latched into its output. In a synchronous logic circuit, an electronic oscillator called the clock generates a string (sequence) of pulses, the "clock signal". This clock signal is applied to every storage element, so in an ideal synchronous circuit, every change in the logical levels of its storage components is simultaneous. Ideally, the input to each storage element has reached its final value before the next clock occurs, so the behaviour of the whole circuit can be predicted exactly. Practically, some delay is required for each logical operation, resulting in a maximum speed limitations at which each synchronous system can run. 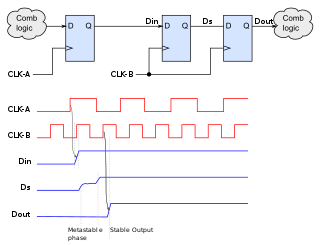 Metastability in electronics is the ability of a digital electronics system to persist for an unbounded time in an unstable equilibrium or metastable state. In digital logic circuits, a digital signal is required to be within certain voltage or current limits to represent a '0' or '1' logic level for correct circuit operation; if the signal is within a forbidden intermediate range it may cause faulty behavior in logic gates the signal is applied to. In metastable states, the circuit may be unable to settle into a stable '0' or '1' logic level within the time required for proper circuit operation. As a result, the circuit can act in unpredictable ways, and may lead to a system failure, sometimes referred to as a "glitch". Metastability is an instance of the Buridan's ass paradox.

In digital electronic design a clock domain crossing (CDC), or simply clock crossing, is the traversal of a signal in a synchronous digital circuit from one clock domain into another. If a signal does not assert long enough and is not registered, it may appear asynchronous on the incoming clock boundary.

Synchronous Ethernet, also referred as SyncE, is an ITU-T standard for computer networking that facilitates the transference of clock signals over the Ethernet physical layer. This signal can then be made traceable to an external clock.

Globally asynchronous locally synchronous (GALS) is an architecture for designing electronic circuits which addresses the problem of safe and reliable data transfer between independent clock domains. GALS is a model of computation that emerged in the 1980s. It allows to design computer systems consisting of several synchronous islands interacting with other islands using asynchronous communication, e.g. with FIFOs.

Two independent clocks, once synchronized, will walk away from one another without limit. To have them display the same time it would be necessary to re-synchronize them at regular intervals. The period between synchronizations is referred to as holdover and performance under holdover relies on the quality of the reference oscillator, the PLL design, and the correction mechanisms employed. 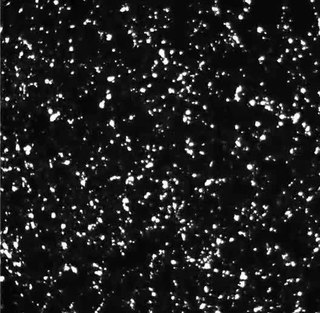 Phase resetting in neurons is a behavior observed in different biological oscillators and plays a role in creating neural synchronization as well as different processes within the body. Phase resetting in neurons is when the dynamical behavior of an oscillation is shifted. This occurs when a stimulus perturbs the phase within an oscillatory cycle and a change in period occurs. The periods of these oscillations can vary depending on the biological system, with examples such as: (1) neural responses can change within a millisecond to quickly relay information; (2) In cardiac and respiratory changes that occur throughout the day, could be within seconds; (3) circadian rhythms may vary throughout a series of days; (4) rhythms such as hibernation may have periods that are measured in years. This activity pattern of neurons is a phenomenon seen in various neural circuits throughout the body and is seen in single neuron models and within clusters of neurons. Many of these models utilize phase response (resetting) curves where the oscillation of a neuron is perturbed and the effect the perturbation has on the phase cycle of a neuron is measured.