He used both traditional Sino-Vietnamese forms and European influences and was a transitional figure between the turn of the 1890s such as Tú Xương and Nguyễn Khuyến and the "New Poetry" movement of the 1930s. [2]

Late in his life he published a literary magazine in Hanoi, An Nam Tạp Chí (Annam Magazine), but when this got into financial difficulty, he readily accepted an invitation to come South and write for the new Đông Pháp Thời Báo (Indochina Times) in Saigon. [3]

Although popular with the newspaper-buying public, his poetry was criticised by the young poets of the Hanoi-based Thơ mới "New Poetry" movement influenced by French poets such as Baudelaire. [4]

Lê Xuân Nhuận, born on January 2, 1930 in Huế (Vietnam), is a Vietnamese-American poet/writer. He has been an honored participant in Who's Who in New Poets, inducted as a member of the Poets' Guild, certified a famous poet and elected by The International Society of Poets into the International Poetry Hall of Fame under the pen name Thanh-Thanh.

Đặng Thân is a bilingual poet, fiction writer, essayist and critic, based in Vietnam. There he is regarded "the typical figure of Post-Doi Moi Literature", and considered "the best humourist ever" and even an "awesomely brilliant genius". Unfortunately, it was repeatedly said that leading governmental departments in Vietnam instructed the "state-controlled" literary circle that his works were "harmful". From 2008 up to 2011 and from 2014 up to present, all publishing houses there had not been allowed to print any book of his for no righteous reasons, and official state-run newspapers had been ordered to leave him in the dark. 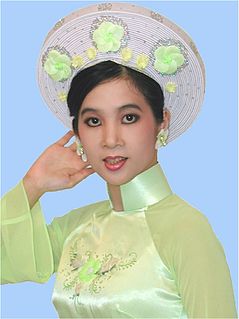 Nguyễn Ngọc Bích Ngân is a Vietnamese-Canadian singer, songwriter, artist and writer. Beside being a performer, Ngoc Bich Ngan is also a writer and essayist at many Vietnamese national newspapers such as Thoi Bao Tap Chi Ca Dao, Thoi Moi media and many more. She was baptized a Catholic and has the Christian name Martha, St. Therese of the Infant Jesus. 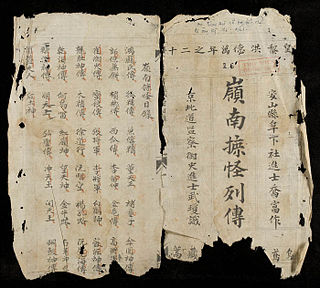 The Lục Tỉnh Tân Văn was a Vietnamese newspaper published in Saigon. Although the title was Sino-Vietnamese, the newspaper was one of the first non-Catholic papers to use the Latin quốc ngữ script.

Ðào Thị Nguyệt Minh, known by the pseudonym Vân Ðài, was a Vietnamese poet. Well known as one of Vietnam's primary female poets, Vân Ðài's work is also closely associated with the Resistance during the Vietnam War. In 1943 Vân Ðài published Hương Xuân, the first women's poetry collection in quốc ngữ, together with Hằng Phương, Mộng Tuyết, and Anh Thơ. Vân Ðài was selected by the editorial board of Feminist Publishing House of New York City University as one of the pioneer poets of the New Poetry style.

Nhã Ca is a Vietnamese-American poet and novelist.

The 2018 V.League 1 season (for sponsorship reasons also known as Nuti Café V.League 1 is the 35th season of the V.League 1, the highest division of Football in Vietnam. The season started on 10 March 2018 and ran until 8 October 2018. It was expected to be known as the Toyota V.League 1, however, in December 2017 Toyota ended their sponsorship deal with the Vietnam Football Federation one year early.