Its history began in 1945, when a stage of the Municipal Dramatic Theatres (Miejskie Teatry Dramatyczne) was opened in the basement by Marszałkowska 8. The theatre has existed as an independent entity since 1972. The theatre has operated under various names: Teatr Rozmaitości (1948–1949), later Teatr Dzieci Warszawy (Theatre of the Children of Warsaw) then Teatr Mlodej Warszawy (Theatre of Young Warsaw) and again as Teatr Rozmaitości. [2] 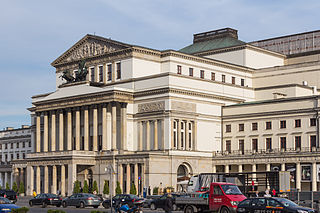 The National Theatre in Warsaw, Poland, was founded in 1765, during the Polish Enlightenment, by that country's monarch, Stanisław August Poniatowski. The theatre shares the Grand Theatre complex at the Theatre Square in Warsaw with another national venue, the Poland's National Opera.

Warsaw Uprising Square, still known by its former name Napoleon Square, is a square in the central Warsaw district of Śródmieście.

Marszałkowska is one of the main thoroughfares of Warsaw's city center. It links Bank Square in its north sector with Plac Unii Lubelskiej in the south.

Warsaw Arsenal is a building of a military arsenal in Warsaw, Poland. It is located at Długa street, in the proximity of the Warsaw's Old Town. Throughout the ages, the building served a variety of roles. It was the scene of heavy fighting during the Warsaw Insurrection of 1794. Currently, it houses the National Museum of Archaeology.

The Grand Theatre in Warsaw, known in full as the Grand Theatre–National Opera, is a theatre and opera complex situated on the historic Theatre Square in central Warsaw, Poland. The Warsaw Grand Theatre is home to the Polish National Ballet and is one of the largest theatrical venues in the world, with a seating capacity of over 2,000.

Stanisław Żaryn (1913–1964) was an architect, urbanist, historian and academic teacher who significantly contributed to process of reconstruction of Polish historical architecture after its destruction by Germans during WW2. He was born in Warsaw to Eugenia and Franciszek Zaryn. 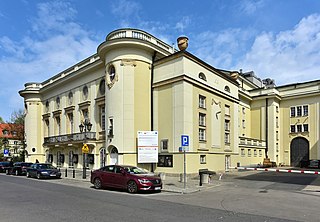 Warsaw Main Railway Station was the name of two different railway stations in Warsaw, Poland, both now defunct. A smaller terminus station with two platforms again named Warszawa Główna opened on March 14, 2021. The name was retained for historical reasons only, and the actual main station in Warsaw is Warszawa Centralna located about 1 km to the east. 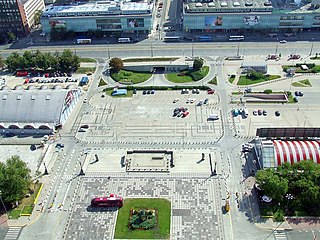 Parade Square is a square in downtown Warsaw. Located between ulica Świętokrzyska in the north, Aleje Jerozolimskie in the south, ulica Marszałkowska in the east and the monumental Palace of Culture and Science to the west, it is one of Warsaw's central squares. It's one of the largest city squares in the world, and the second largest in the European Union, after the Alexanderplatz in Berlin, Germany.

Hotel Polski, opened in 1808, was a hotel in Śródmieście, Warsaw, Poland, at 29 Długa street.

The Warsaw Theatre Directorate was the chief authority for theatres in the Duchy of Warsaw in Warsaw during the 19th and early 20th centuries. It was set up by decree of Frederick Augustus I of Saxony on 14 April 1810 as the Rządowa Dyrekcja Teatru, its draft statute having been developed by Wojciecha Bogusławskiego. In 1822 it changed its name to Dyrekcja Teatrów i Wszelkich Widowisk Dramatycznych i Muzycznych w Królestwie, then in 1833 to the Warsaw Theatre Directorate. It ceased to exist in July 1915.

Plac Konstytucji, or Constitution Square in English, is a major square situated in the central Śródmieście district of Warsaw, Poland.

Church of the Holiest Saviour is a Roman Catholic parish church in the Śródmieście district of Warsaw, Poland. It is located on the Saviour Square.

Muzeum Sztuki Nowoczesnej w Warszawie is a museum in Warsaw, Poland. It was established in 2005.

Dom Prasy was a Polish news corporation of the 1920s and 1930s, as well as a name of the eponymous building in Warsaw, where it had its headquarters. It published numerous daily newspapers and weekly journals. Taken over by the Germans during World War II, the company's assets became the cornerstone of the Nowy Kurier Warszawski propaganda newspaper. After the war the Dom Prasy's assets became the foundation of several modern newspapers, including Życie Warszawy.

The Theatre Museum in Warsaw is gathering collections related to the history of Polish and foreign theatres.

Henryków is a neighborhood of the Białołęka district of northern Warsaw, Poland. The estate is located east of Modlińska Street.

Frascati is a historic neighbourhood and inner-suburb in central Warsaw, the capital of Poland. The area extends eastward from the Three Crosses Square and covers the broad parkland and housing estates surrounding Frascati and Nullo streets, located between the Polish parliament building, the Warsaw Stock Exchange and the National Museum. The neighbourhood was named after the Italian city of Frascati. 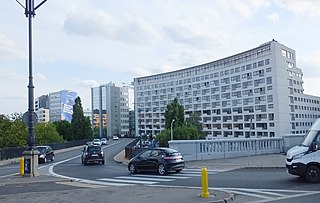 Solec is a neighbourhood along the Vistula river in Warsaw, the capital of Poland. It is situated east of Frascati on the southeastern edge of Downtown and south of the Powiśle suburb. Solec was a self governing settlement and town from 1675 until its incorporation into Warsaw in 1791. The name "Solec" is derived from the Polish word for salt – sól – which was extensively traded and transported through the neighbourhood since the late Middle Ages. However, contemporary Solec is mostly occupied by residential tower blocks and commercial buildings.