TV3 Lithuania is a Lithuanian free-to-air television channel that was launched on 11 April 1993. It was owned by Modern Times Group (MTG) until 2017, when it was acquired by Providence Equity Partners for €115 million.

The 2007 FIBA European Championship, commonly called FIBA EuroBasket 2007, was the 35th FIBA EuroBasket regional basketball championship held by FIBA Europe, which also served as Europe qualifier for the 2008 Summer Olympics, giving a berth to the champion and runner-up teams. It was held in Spain between 3 September and 16 September 2007. Sixteen national teams entered the event under the auspices of FIBA Europe, the sport's regional governing body. The cities of Alicante, Granada, Madrid, Palma de Mallorca, and Seville hosted the tournament. Russia won its first FIBA EuroBasket title since the dissolution of the Soviet Union, by defeating hosts Spain, with a 60–59 score in the final. Russia's Andrei Kirilenko was voted the tournament's MVP.

EuroBasket 2011 was the 37th men's European Basketball Championship, held by FIBA Europe. The competition was hosted by Lithuania. This was the second time EuroBasket had been held in Lithuania, the country having also hosted the 1939 championship. FIBA Europe asserted that Lithuania managed to organize the best European championship in its history. The top two teams are guaranteed spots at the 2012 Summer Olympics.

Latvian Independent Television was a major private television company in Latvia, founded in 1996. LNT featured TV series, news and entertainment programmes, airing 24 hours a day in Latvian. It went off the air on March 1, 2020, and was replaced by TV3 Mini, that is a child targeted channel

TV3 Latvia is a Latvian commercial television channel targeted at a Latvian language audience owned by All Media Baltics, a company owned by investment firm Providence Equity Partners. TV3 was launched in 1998, but did not receive a terrestrial license until 2001. The channel has since increased its viewing share to become the most popular channel in Latvia as of September 2007, surpassing its then-closest rival LNT.

Sportklub is the first subscription sports channels which has been broadcast in Bosnia and Herzegovina, Serbia, Montenegro and Slovenia since 2006. The channel commenced broadcasts in Croatia in 2007. and in North Macedonia in 2011.

The Georgia men's national basketball team represents the country of Georgia in international basketball matches, and is controlled by the Georgian Basketball Federation. Georgia became a member of FIBA in 1992, after they gained independence from the Soviet Union. The national team played their first official match against Poland in 1995.

Viasat 1 was a Ghanaian television channel owned by the Swedish listed media group, Modern Times Group (MTG). It was re-branded to Kwesé Free Sports in 2016.

EuroBasket 2015 was the 39th annual edition of the EuroBasket championship that is organized by FIBA Europe. It took place in Croatia, France, Germany, and Latvia, making it the first EuroBasket held in more than one country. It started on 5 September and ended on 20 September. 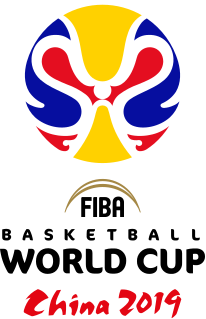 EuroBasket 2017 was the 40th edition of the EuroBasket championship that was organized by FIBA Europe and held between 31 August and 17 September 2017. Beginning from 2017, the continental championships take place every four years with a similar system of qualification as for the FIBA Basketball World Cup.

The EuroBasket 2022 will be the 41st edition of the EuroBasket championships organized by FIBA Europe: the first since it was agreed it would take place every four years, with a similar system of qualification as for the FIBA Basketball World Cup. It was originally scheduled to take place between 2 and 19 September 2021, but due to the COVID-19 pandemic and the subsequent postponement of the 2020 Summer Olympics to 2021, it has been postponed to 1 to 18 September 2022.

The 2019 FIBA Basketball World Cupqualification for the FIBA Europe region, began in August 2017 and concluded in February 2019. Contrary to previous years, no teams were automatically placed into the World Cup, so all FIBA Europe nations had to participate in qualification.

The 2021 European Women Basketball Championship, commonly called EuroBasket Women 2021, was the 38th edition of the continental tournament in women's basketball, sanctioned by the FIBA Europe. It was co-hosted by France and Spain between 17 and 27 June 2021. It was the third time to be hosted by multiple countries. The tournament also served as part of European qualification for the 2022 FIBA Women's Basketball World Cup, with the top six nations advancing to the qualifying tournaments. The final were planned to be held at the AccorHotels Arena in Paris but moved to the Pavelló Municipal Font de San Lluís, in Valencia.