Taake (Norwegian:  [ˈtòːkə] ) is a Norwegian black metal band from Bergen, formed in 1993 and originally named Thule. The band's one continuous member is Hoest, who writes and records most of the music. He has released seven full-length albums and several EPs. The band describes itself as "True Norwegian black metal", and Hoest said that he wants to "awaken national pride and cultural nostalgia in my Norwegian listeners" as well as to remind people "that Hell is right here on Earth and that humans can be demons". [1] All lyrics are in Hoest's native dialect and are printed in Norse runes. [2] [3] "Taake" is the old spelling of the Norwegian word "tåke", meaning "fog".

In 1993, Ørjan Stedjeberg (then known as 'Ulvhedin'), formed the first version of the band Taake under the name Thule, together with drummer 'Svartulv'. Thule released two demos, Der vinterstormene raste in 1993 and Omfavnet av svarte vinger in 1994. Shortly after, the band changed its name to Taake and 'Ulvhedin' adopted the new pseudonym 'Hoest' (meaning "autumn" or "harvest"). In 1995, the released the demo Manndaudsvinter in 1995. This was followed in 1996 by a 7" EP called Koldbrann i jesu marg.

Between 1999 and 2005, Taake released three full-length albums. They are a trilogy of concept albums linked by the topics of "death, Norway, and the devil in man". [4]

The first full-length album, Nattestid ser porten vid , was released by Wounded Love Records in 1999. The album was written entirely by Hoest, but he brought in a session musician, 'Tundra', to perform bass guitar and drums. It was recorded throughout 1997 and 1998 at the Grieg Hall.

The second installment of the trilogy, Over bjoergvin graater himmerik , was released in 2002 by Wounded Love Records. On this record, Hoest surrounded himself with a band: second guitarist 'C. Corax', bassist and pianist 'Keridwen', and drummer 'Mutt' (Gaahlskagg, Trelldom, Sigfader).

Over the following three years, Taake released four short EPs and played a few festivals (most notably the Hole in the Sky Festival in Norway, with Ivar Bjørnson of Enslaved on guitar), but according to Hoest, Taake was "on ice for a while". [1]

Before the 2006–2007 European tour, Taake revamped their official homepage. Following the infamous March 2007 show in Essen, the band were removed from several festivals and received much backlash. At the same time, Lava, who had been bass guitarist since 2002, left the band.

In 2008, a fourth album was released, recorded entirely by Hoest and simply named Taake . The album was recorded for Hoest's own label Svartekunst Produksjoner, and was distributed via Dark Essence Records.

In 2011, Taake released the EP Kveld, featuring both new and re-recorded songs. This was followed shortly after by Taake's fifth full-length album, Noregs vaapen . Hoest collaborated with many prominent Norwegian black-metallers for this record including Attila Csihar, Nocturno Culto, Demonaz and Ivar Bjørnson. It was again released on his own label Svartekunst Produksjoner to much critical acclaim. [5] [6] The album was nominated for the prestigious Spellemann award in Norway for top metal release. This nomination was met with some derision due to anti-Islamic lyrics. [7]

Taake played their first show in the United States in May 2014 at Maryland Deathfest in Baltimore.

In 2014, Taake released the sixth full-length album Stridens hus [8] and the EP Kulde through Dark Essence Records. In support of this record and as a follow up to their successful show in Maryland, Taake announced an East Coast US tour for the first time in their history, to begin in June 2015. [9]

In 2017, Taake released their seventh studio album, Kong Vinter, along with the EP Baktanker. [10]

Taake were forced to cancel their planned 2018 US tour after Antifa activists campaigned to stop it, due to the past controversies. [11] [12] [12]

In March 2007, during a concert at Essen in Germany, Hoest appeared on stage in corpse paint with a swastika painted on his chest, above an inverted cross. [15] [16] In Germany, the use of the swastika is forbidden by law, and the remainder of Taake's German concerts were cancelled. Shortly after, Hoest stated:

Taake is not a political Nazi band [...] everyone should know by now that our whole concept is built upon provocation and anything evil [...] we truly apologize to all of our collaborators who might get problems because of the Essen swastika scandal (except for the untermensch owner of that club; you can go suck a Muslim!) [17]

Hoest later explained that he "was taking the piss" and had used the swastika only "as another symbol for evil", saying "the pentagram and inverted cross don't invoke reactions anymore". [18] Music writer Stuart Wain likened Hoest's actions to those of the Sex Pistols and Siouxsie Sioux, who also wore swastikas for shock value. [19] In January 2008, Hoest wrote:

I do realize that it is rather unforgivable to display a swastika in Germany, yes. On the other hand I strongly feel that Black Metal bands should allow themselves to use any kind of destructive/negative symbolism, as the basis of this expression is above all: Evil! Black Metal is still not, and should never become, harmless like all other styles of housebroke metal. Frankly, I find it preposterous that we get away with lyrics about murder, torture, rape, necrophilia and suicide, but get boycotted for wearing a symbol (which, by the way, has nothing to do with the band’s concept) on one single occasion. A part of our mission is to invoke negative feelings, so I found it quite appropriate to remind our German audience of their biggest shame. [20]

Taake's nomination for the 2012 Spellemann award was criticized, due to anti-Islamic lyrics in their song "Orkan". It includes the line "Til Helvete med Muhammed og Muhammedanerne; utilgivelige skikker" ("To hell with Muhammad and the Muhammadans; unforgivable customs"). Hoest replied that "we do not encourage either violence or racism," adding "our view, in the name of freedom of expression, is that it is shameful to adhere to Christianity or Islam. Incidentally, Christianity is mentioned in the same lyrics, but that doesn't seem to have been given any emphasis". [21]

Taake were forced to cancel their planned 2018 US tour after Antifa activists campaigned to stop it, due to the past controversies. Many venues cancelled the shows after being contacted and threatened [22] by Antifa groups, and support act King Dude pulled out. [23] Musician and activist Talib Kweli also cancelled a show at a venue where Taake was slated to perform, calling the venue "sympathetic to white nationalism". [24] Hoest replied that "Taake is not a racist band. Never has been, never will be". [25] He said the incident showed how "a small minority of left wing agitators are able to force their agenda on the majority" through "lies, misinformation" and "threats of violence". [26]

Graveland are a Polish pagan metal band which was formed in 1991 by Rob Darken. They began as a black metal band before adopting a pagan and Viking metal style. The lyrics and imagery of Graveland are strongly inspired by European mythology, far-right politics and neo-Nazism, nature, winter and war. Their early work focused on Celtic and Slavic mythology, while their later work focuses on Norse mythology and Wotanism.

The Meads of Asphodel are an English black metal band with pronounced medieval, Arab, punk, and progressive metal influences from Hertfordshire, England.

Roger Rasmussen, better known by the stage name Nattefrost, is a Norwegian musician, best known for being the vocalist and a founding member of black metal band Carpathian Forest. He also fronts the side projects World Destroyer and Kreft, and since 2003 also has a solo project of his own.

Ragnarok is a Norwegian black metal band. The band was formed in Sarpsborg, Norway in 1994 by Jerv and Jontho, after they left Thoth, their previous band. Lyrical themes include Norse Mythology, Vikings, Satanism, War, and Anti-Christianity. The band's name comes from the Old Norse word Ragnarök, the prophesied last battle between the Norse gods and the giants. They are "one of the most extreme black metal bands in Norway", making heavy use of make-up and special effects.

Koldbrann ("Gangrene") is a Norwegian black metal band founded in 2001.

Peste Noire are a black metal band from La Chaise-Dieu, France. It was formed by "La sale Famine de Valfunde" also known simply as "Famine" in 2000. Their music uses standard black metal elements mixed with traditional Gallic instrumentation, and influences from genres like punk and electronic music. The band is sometimes referred to as P.N. or K.P.N.

Gaahlskagg is a Norwegian black metal band from Sunnfjord, Norway, founded in 1998 by Gaahl and Skagg. Gaahl and Skagg were also members of the band Sigfader at the time.

Slavia was a Norwegian black metal band formed in 1997.

Taake is the fourth studio album by Norwegian black metal band Taake. It was released on October 20th, 2008.

Nattestid Ser Porten Vid is the first full-length album released by Norwegian black metal band Taake. It was released by Wounded Love Records in 1999. The album was written entirely by Hoest, but he brought in a session musician, Tundra, to perform bass and drums. It was recorded throughout 1997 and 1998 at Grieghallen. Nattestid is part one of a trilogy. All the writing on the CD and lyrics in the booklet are written in runes. All of the lyrics are sung in Norwegian. 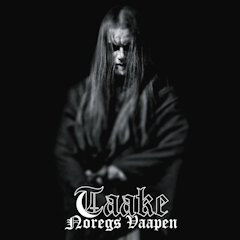 Stridens hus is the sixth full-length album from Norwegian black metal band Taake. It was released on December 8, 2014.

Over Bjoergvin graater himmerik is the second full-length album from Norwegian black metal band Taake. It was released on January 1, 2002.

Hordalands doedskvad is the third full-length album from Norwegian black metal band Taake. It was released on February 28, 2005.

Acârash is an occult blackened heavy metal band from Oslo, Norway. The band combines elements of doom metal, black metal and 1970s hard rock. They are signed to Dark Essence Records. The members have past connections with Lonely Kamel and The Void