listen ); [5] born 21 September 1998) is a Slovenian cyclist who currently rides for UCI WorldTeam UAE Team Emirates. [6] He became the youngest cyclist to win a UCI World Tour race when he won the 2019 Tour of California at age 20. [7] In his debut Grand Tour, Pogačar won three stages of the 2019 Vuelta a España en route to a third place finish. [8] [9] In both his 2020 Tour de France debut and the following year he won three stages and the race overall, as well as the mountains and young rider classifications, becoming the only rider to win these three classifications simultaneously. [10] [11] He is the first Slovenian winner, and, at the age of 21, was the second-youngest winner after Henri Cornet, who won in 1904. [12] [13]

He reached the top of the men's UCI World Ranking for road racing in October 2020, holding the position for two weeks, and again in July 2021.

Pogačar followed his older brother Tilen in joining the Rog Ljubljana club at the age of nine. [14] In 2011 he came to the attention of Road World Championship medallist Andrej Hauptman, who is as of 2021 his coach and head coach and selector for the Slovenian national cycling team. Hauptman watched Pogačar pursuing a group of much older teenagers from 100 metres behind. Thinking that Pogačar was struggling to keep up with the older riders, he told the race organisers that they should provide some assistance to Pogačar: the organisers explained that the younger rider was in fact about to lap the group he was chasing. [15] [16] Hauptman subsequently managed Pogačar as an under-23 rider with the Rog–Ljubljana team, before joining UAE Team Emirates as a directeur sportif in May 2019, after Pogačar joined the team. [14]

Pogačar joined UAE Team Emirates from the 2019 season, a deal that was made ahead of the 2018 Tour de l'Avenir, which he won. He made his debut for the team at the 2019 Tour Down Under, where he finished 13th overall. He went on to win the Volta ao Algarve and placed sixth at the Tour of the Basque Country. [14] In May 2019, he won the Tour of California, becoming the youngest rider to win a UCI WorldTour stage race. [15] He won two stages in the second week of the 2019 Vuelta a España and was in third place overall position going into the third week. He took a third stage win in a 40-kilometre (25-mile) solo breakaway on the penultimate stage and gained enough time over his opponents to take over the Young Rider Jersey and secure the final podium position before the last stage in Madrid. [17]

Prior to the interruption to the sport caused by the Covid-19 pandemic Pogacar won the 2020 Volta a la Comunitat Valenciana and was second to Adam Yates in the curtailed UAE Tour. When the season resumed he took fourth in the Critérium du Dauphiné and won his national time trial championship.

In the 2020 Tour de France, he initially expressed his support for teammate Fabio Aru, [18] He quickly demonstrated that he was in better form than his teammate, coming second on stage four and losing time to the leaders only in stage seven, which was affected by crosswinds, before Aru withdrew on stage nine. Pogacar won that stage to Laruns by outsprinting rivals Primož Roglič and Egan Bernal, as well as Marc Hirschi, who had been on an 80-kilometer solo breakaway. In the third week, he won stage 15, a mountain stage to the Col du Grand Colombier. Pogačar was then in second place overall, within a minute of Roglič. On the penultimate stage of the Tour, a 36-kilometer time trial finishing at La Planche des Belles Filles, he won his third stage of the Tour and took the lead in the general classification from Roglič by 59 seconds going into the final stage in Paris. [19]

In addition to thus winning the Tour, he also won the young rider classification with a nearly six-minute advantage on the closest rider, Enric Mas, and he took a decisive lead in the mountains classification. [20] The previous rider to win three jerseys was Eddy Merckx in 1972. He became the twelfth rider to win the Tour de France on their first attempt, and the first since 1983. [21]

He started the 2021 season by winning the UAE Tour, Tirreno-Adriatico, Liège-Bastogne-Liège – his first win in a monument [14] – and the Tour of Slovenia.

Following stage eleven, which included a double ascent of Mont Ventoux, the closest rivals to Pogačar included Rigoberto Uran, Jonas Vingegaard and Carapaz, but all them remained more than five minutes behind. Pogacar had temporarily lost some time to Vingegaard on the final ascent of Ventoux before catching him on the descent to the finish alongside Carapaz and Uran. [26] Pogačar extended his lead further with wins on stages 17 (to the Col de Portet) [27] and 18 (in Luz Ardiden), by which point he had a lead of 5'45" over Vingegaard and an unassailable lead in the polka dot jersey classification. [28] On the penultimate 20th stage, a time trial between Libourne and Saint-Émilion, Pogačar conceded half a minute to Vingegaard but retained a lead of over five minutes going into the final Champs-Élysées stage. [29]

Pogačar's win made him the youngest cyclist to win consecutive Tours. This was also the second year in a row that he won three distinctive jerseys. At the finish of the race, Eddy Merckx said that he regarded the Slovenian as "the new Cannibal", in reference to his own nickname, also suggesting that "if nothing happens to him, he can certainly win the Tour de France more than five times". [30]

Pogačar won the bronze medal in the Men's road race at the Olympic Games. [31]

Tadej was born and grew up in Komenda, 20 km north of the Slovenian capital of Ljubljana. His mother Marjeta is a teacher of French and his father Mirko formerly worked in management at a chair factory before joining Tadej's former team Ljubljana Gusto Santic as part of their management team in 2021. Tadej is the third of four siblings. [14]

Pogačar lives in Monaco with his girlfriend, fellow Slovenian professional cyclist Urška Žigart. [32] His role model is Alberto Contador. [33] He was also an admirer of Fränk and Andy Schleck when growing up. [14] 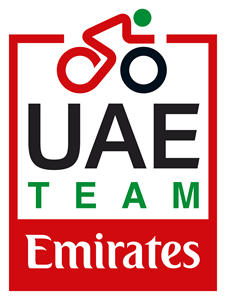 UAE Team Emirates is an Emirati road bicycle racing team. The team competes at UCI WorldTeam level and has done so since the UCI World Tour was formed as the top category of road cycling in 2005. However the team was temporarily suspended from the ProTour in 2010, missing one ProTour event.

Andrej Hauptman is a Slovenian former professional road racing cyclist. In 2001 he became the first Slovenian rider to take a world championship medal in cycling when he won the bronze in the road race at the Road World Championships. After retiring from competition, he became a cycling coach: he is coach of fellow Slovenian cyclist Tadej Pogačar and also serves as head coach and head of selectors for the Slovenian national cycling team. He formerly managed Ljubljana Gusto Santic, where as well as guiding Pogačar through his under-23 career he coached Primož Roglič when the latter switched from ski jumping to cycling and rode for the team's development squad. In May 2019 Hauptman joined UAE Team Emirates as a directeur sportif after Pogačar joined the team.

Rafał Majka is a Polish professional road bicycle racer, who currently rides for UCI WorldTeam UAE Team Emirates. He is known as a strong climber, and rose to prominence at the 2013 Giro d'Italia, where he finished 7th overall, and 6th one year later. Other major achievements are three mountainous stage wins in the Tour de France as well as the Mountains classification in the 2014 and 2016 edition, two stages and the overall victory at the 2014 Tour de Pologne. He achieved his first Grand Tour podium finish at the 2015 Vuelta a España, where he finished third. At the 2016 Summer Olympics, he won a bronze medal for Poland in the road race. 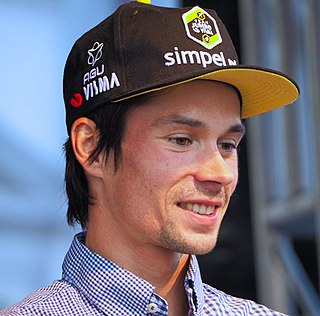 Primož Roglič is a Slovenian racing cyclist who rides for UCI WorldTeam Team Jumbo–Visma. He started as a ski jumper but then shifted to cycling.

Egan Arley Bernal Gómez is a Colombian cyclist, who rides for UCI WorldTeam Ineos Grenadiers. In 2019 he won the Tour de France, becoming the first Latin American rider to do so, and the youngest winner since 1909. At the 2021 Giro d'Italia, Bernal took his second Grand Tour win. 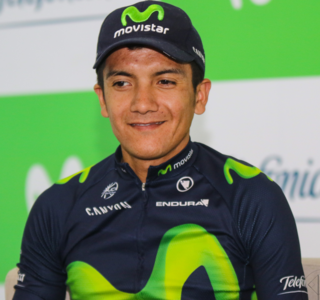 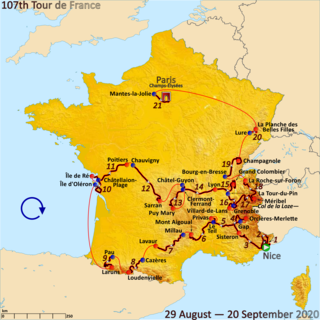 The 2020 Tour de France was the 107th edition of the Tour de France, one of cycling's three Grand Tours. Originally scheduled to start on 27 June 2020, it was postponed until 29 August 2020 due to the COVID-19 pandemic in France. The race began in Nice on 29 August and concluded with its traditional run on the Champs-Élysées on 20 September. A total of 176 riders from 22 teams participated in the race. The overall general classification was won for the first time by a Slovenian, Tadej Pogačar of UAE Team Emirates. His fellow countryman Primož Roglič finished second, while Australian Richie Porte (Trek–Segafredo) came third. 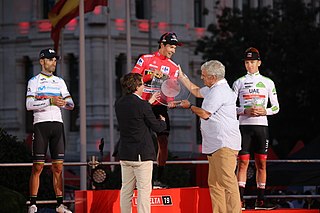 The 2019 Vuelta a España was a three-week Grand Tour cycling stage race that took place in Spain, Andorra and France between 24 August and 15 September 2019. The race was the 74th edition of the Vuelta a España and is the final Grand Tour of the 2019 cycling season. The race started with a team time trial in Torrevieja on the Costa Blanca.

The 2021 Tour de France was the 108th edition of the Tour de France, one of cycling's three grand tours. Originally planned for the Danish capital of Copenhagen, the start of the 2021 Tour was transferred to Brest because of the COVID-19 pandemic, with Copenhagen hosting four matches in the UEFA Euro 2020, which had also been rescheduled to 2021 because of the pandemic. Originally scheduled for 2 to 25 July 2021, the Tour was moved to 26 June to 18 July 2021 to avoid the rescheduled 2020 Summer Olympics. This would have been the first occasion on which the Tour de France had visited Denmark. Denmark will now host the Grand Départ in 2022.

The 2019 Giro d'Italia was a three-week Grand Tour cycling stage race organised by RCS Sport that took place mainly in Italy, between 11 May and 2 June 2019. The race was the 102nd edition of the Giro d'Italia and was the first Grand Tour of the 2019 cycling season. The race started with an individual time trial in Bologna, and finished with another time-trial in Verona. The race was won by Richard Carapaz, who became the first Ecuadorian rider to win the Giro d'Italia. Italian Vincenzo Nibali finished 2nd, with Slovenian rider Primož Roglič in 3rd place. Carapaz also became the second South American rider to win the Giro, after Nairo Quintana in 2014.

2021 in men's road cycling includes the 2021 men's bicycle races governed by the Union Cycliste Internationale. The races are part of the UCI Road Calendar. 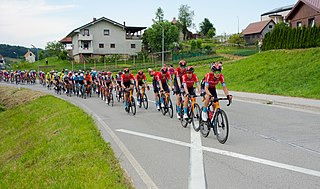 The 2021 Tour of Slovenia was the 27th edition of the Tour of Slovenia stage race that was held from 9 to 13 June 2021. The 2.Pro-category race was initially scheduled to be a part of the inaugural edition of the UCI ProSeries, but after the 2020 edition was cancelled due to the COVID-19 pandemic, it made its UCI ProSeries debut in 2021, while also still being a part of the 2021 UCI Europe Tour. This was second time Tour of Slovenia was participated by Tour de France winner, 2011 by Carlos Sastre and in 2021 by Tadej Pogačar.

The 2021 Tour de France was the 108th edition of Tour de France, one of cycling's Grand Tours. The Tour began in Brest, France on 26 June, and Stage 11 from Sorgues to Malaucène occurred on 7 July. The race finished on the Champs-Élysées in Paris on 18 July.