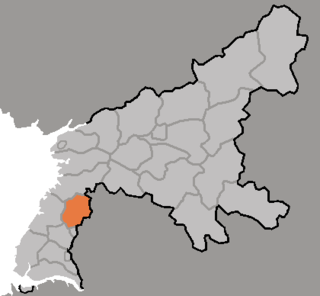 Taedong or Daedong may also refer to:

Daedong College is a private technical college in Busan, the second-largest city in South Korea. Its campus lies in the district of Geumjeong-gu. About 50 instructors are employed. The current president is Kim Gyeong-hui (김경희).

Daedong Credit Bank (DCB) is a North Korean bank, established in 1995, and based in the country's capital, Pyongyang. 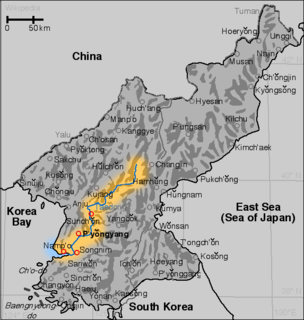 The Taedong River is a large river in the North Korea. It rises in the Rangrim Mountains of the country's north. It then flows southwest into Korea Bay at Namp'o. In between, it runs through the country's capital, Pyongyang. Along the river are landmarks such as the Juche Tower and Kim Il-sung Square. 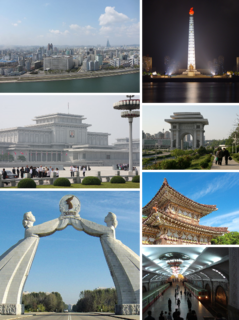 Pyongyang, P'yŏngyang or Pyeongyang, is the capital and largest city of North Korea. Pyongyang is located on the Taedong River about 109 kilometres (68 mi) upstream from its mouth on the Yellow Sea. According to the 2008 population census, it has a population of 3,255,288. The city was split from the South Pyongan province in 1946. It is administered as a directly-administered city with equal status to provinces, the same as special cities in South Korea, including Seoul.

Chung-guyŏk is one of the 19 guyok which constitute the city of Pyongyang, North Korea. The district is located in the center of the city, between the Potong and Taedong Rivers, and is bordered to the north by Moranbong-guyok, to the northwest by Potonggang-guyok, and to the south by Pyongchon-guyok. 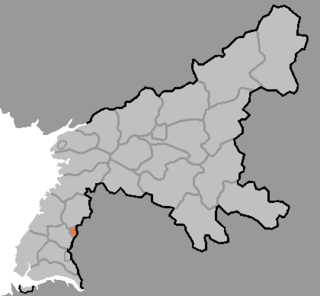 Ch'ŏllima is a kuyŏk in Namp'o Special City, North Korea. Prior to 2004, it was Ch'ŏllima-kuyok, a district of northeastern Namp'o Directly Governed City. Following the demotion of Namp'o in 2004, Ch'ŏllima became an independent county. The region was part of Kangsŏ county in 1952, and was entered into Taean city; when Taean was demoted to county in 1983, it became part of Namp'o Special City.

Kangdong County, is one of Pyongyang's four suburban counties. In 1983 it was separated from South P'yongan Province and assumed direct governance by the Pyongyang City People's Committee. It is bordered by Sŏngch'ŏn-gun, South P'yongan in the north and east, Sŭngho-guyŏk from the south and the Taedong River from the west.

Moranbong-guyŏk (Chosŏn'gŭl: 모란봉구역), or the Moranbong District, is one of the 19 guyŏk which constitute the capital city of Pyongyang, North Korea. It is located north of Chung-guyok, the city's central district, and is bordered to the north by Sosong and Taesong-guyoks, to the east by the Taedong River, and the west by the Potong River and Potonggang-guyok. It is named after Moran Hill located in the district's west area. It was designated a guyŏk in October 1960 by the Pyongyang City People's Committee.

Sŏn'gyo-guyŏk or Songyo District is one of the 19 guyŏk that constitute the city of Pyongyang, North Korea. It is on the eastern bank of the Taedong River at the center of East Pyongyang. It is bordered to the south by Nakrang-guyok, to the north by Tongdaewon-guyok and to the east by Ryokpo and Sadong-guyoks. It was established in September 1959. 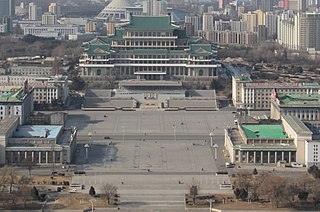 Kim Il-sung Square is a large city square in the Central District of Pyongyang, North Korea, and is named after the country's founding leader, Kim Il-sung. The square was constructed in 1954 according to a master plan for reconstructing the capital after the destruction of the Korean War. It was opened in August 1954. The square is located on the foot of the Namsan Hill, west bank of the Taedong River, directly opposite the Juche Tower on the other side of the river. It is the 37th largest square in the world, having an area of about 75,000 square meters which can accommodate a rally of more than 100,000 people. The square has a great cultural significance, as it is a common gathering place for rallies, dances and military parades and is often featured in media concerning North Korea.

Rangrang-guyŏk or Rangrang District is one of the 19 kuyŏk that constitute the city of Pyongyang, North Korea. It is located south of the Taedong River, and is bordered to the north by Songyo-guyok, to the east by the Ryokpo-guyok, and to the south by Chunghwa and Kangnam counties. 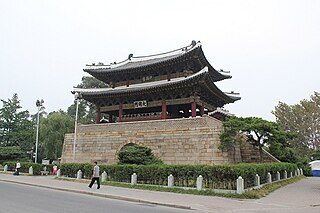 Taedong Gate is the eastern gate of the inner castle of the walled city of Pyongyang, and one of the National Treasures of North Korea. Located on the banks of the Taedong River, from which it gets its name, the gate was originally built in the sixth century as an official Koguryo construction, and, along with the Ryongwang Pavilion and Pyongyang Bell, served as the center of the inner castle's eastern defenses.The present construction dates from 1635, however, as the original was burnt to the ground during the Imjin wars of the late 16th century. 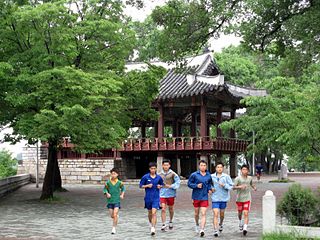 Ryongwang Pavilion is a scenic overlook located in the central district of Pyongyang, North Korea. Located on the bank of the Taedong River, the pavilion was first constructed during the Goguryeo dynasty as "Sansu Pavilion", and was part of the defenses of the walled city of Pyongyang (along with the nearby Taedong Gate and Pyongyang Bell. It is labeled as National Treasure #16 in North Korea.

National Route 1(Hangul: 국도 제1호선; RR: Gukdo Je Il Hoseon) is a national highway in South Korea. It connects Mokpo, South Jeolla Province with the city of Paju in Gyeonggi-do. Before the division of the Korean peninsula, the highway ran until Sinuiju, North P'yongan Province, in present-day North Korea.

Ongryu Bridge, also spelled Okryu Bridge andOngnyu Bridge, is a bridge on the Taedong River in Pyongyang, North Korea. Construction began in March 1958; the bridge was opened in August 1960.

The Rungra Bridge is a bridge in Pyongyang, North Korea, one of the city's six bridges on the Taedong River. Located between the Okryu Bridge to the south and Chongryu Bridge to the north, it connects Moranbong-guyok on the right (west) bank of the Taedong River with Taedonggang-guyok on the left bank, passing through Rungra Island in the middle. It totals 1,070 metres (3,510 ft) in length. It was completed in 1988.

Rungra Island is an island in Pyongyang, North Korea, located in the middle of the Taedong River. Its total area is 1.3 square kilometres (0.50 sq mi). The Chongryu Bridge on the north side and the Rungra Bridge on the south side connect the island to the rest of Pyongyang. The island is a good place to see some of the Eight Views of Pyongyang.

"South Pyeongan Province" or "Pyeongannam-do" is, according to South Korean law, a province of the Republic of Korea, as the South Korean government formally claims to be the legitimate government of whole of Korea. The area constituting the province is under the de facto jurisdiction of North Korea. 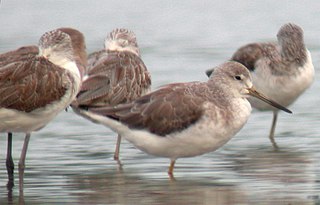 The Daedong Bay Important Bird Area lies on the north-eastern coast of the Yellow Sea on the west coast of North Korea near the mouth of the Taedong River. It comprises 3,500 ha of marine, intertidal and beach wetlands, encompassing a 2,000 ha protected area. It has been identified by BirdLife International as an Important Bird Area (IBA) because it supports significant populations of various birds, including greater white-fronted geese, Oriental storks, black-faced spoonbills, Chinese egrets, great bustards, hooded cranes, red-crowned cranes, Far Eastern curlews, Nordmann's greenshanks and spoon-billed sandpipers. Threats to the site include agricultural intensification and aquacultural development.