The Taipei Grand Mosque is the largest and oldest mosque in Taiwan. Located in the Da'an District of Taipei City, it is Taiwan's most important Islamic structure.

Islam is a slowly growing religion in Taiwan and it represents about 0.3% of the population. There are around 60,000 Muslims in Taiwan, in which about 90% belong to the Hui ethnic group. There are also more than 250,000 foreign Muslims working in Taiwan from Indonesia, Malaysia, Thailand and the Philippines, as well as other nationalities from more than 30 countries. As of 2018, there are eleven mosques in Taiwan, with the most notable being the Taipei Grand Mosque, the oldest and largest one.

Taiwan Trade Shows is a series of trade exhibitions organized by TAITRA in Taipei, Taiwan. It is based on the Taiwan Clothes Export Mart Exhibition first held in September 1974. Currently, TAITRA holds a number of annual "Taiwan Trade Show" exhibitions including COMPUTEX, Taipei Cycle, and TAITRONICS at the Taipei World Trade Center.

The Ministry of Labor is a ministry of the Republic of China (Taiwan) representing opinions of employees, political and academic circles to review labor policies, laws and regulations, as well as related projects and programs in Taiwan. MOL is working with various international organizations and bilateral exchanges for elevating the welfare of labors in ROC, such as the Labor Insurance program.

The Longgang Mosque or Lungkang Mosque is a mosque in Zhongli District, Taoyuan City, Taiwan. It is the fifth mosque to be built in Taiwan. As of September 2008, the Imam was Abdullah Liu.

The Kaohsiung Mosque is a mosque in Lingya District, Kaohsiung, Taiwan. It is the second mosque to be built in Taiwan after Taipei Grand Mosque in Taipei. 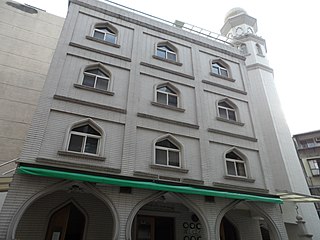 The Taipei Cultural Mosque is a mosque in Zhongzheng District, Taipei, Taiwan. The mosque is the third one to be built in Taiwan and it is owned by the Chinese Muslim Youth League.

The Tainan Mosque is a mosque in East District, Tainan, Taiwan. It is the sixth mosque to be built in Taiwan.

The At-Taqwa Mosque is a mosque in Dayuan District, Taoyuan City, Taiwan. It is the seventh mosque built in Taiwan.

The Chinese Islamic Cultural and Educational Foundation is an organization of Chinese Muslims in Taiwan. It is the first cultural foundation for Islamic education in Taiwan.

The Taiwan Halal Integrity Development Association is a certification body that produces Halal certificates in the Republic of China. The association is based in the Taipei Cultural Mosque in Taipei. 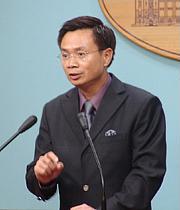 The New Southbound Policy is an initiative of the Government of the Republic of China (Taiwan) under President Tsai Ing-wen that aims to enhance cooperation and exchange between Taiwan and 18 countries in Southeast Asia, South Asia and Australasia.

The Taiwan Film and Audiovisual Institute, formerly Taiwan Film Institute, is a foundation in Zhongzheng District, Taipei, Taiwan which aims at preserving Taiwanese and Mainland Chinese films. At its establishment in 1979, the foundation was known as the Film Library of the Motion Picture Development Foundation. It became the National Film Archive in 1989, and the Chinese Taipei Film Archive later.

The Taiwan Design Center is an art organization based in Songshan Cultural and Creative Park, Xinyi District, Taipei, Taiwan.