Born in Katsushika, Tokyo, Japan, Ishibashi moved to Narimasu, Itabashi after his father's bankruptcy in his first grade at an elementary school. He attended Teikyo Junior & Senor High School and is best known as a member of Tunnels and Yaen with his partner Noritake Kinashi. He is currently married to actress Honami Suzuki (鈴木 保奈美). He was the co-host of the popular music/interview show, Utaban with Masahiro Nakai. He has several nicknames such as "Taka-san" and "Taka-chan."

Ishibashi is known for "teasing" music artists on his show Utaban, especially Morning Musume. He has over the years come up with different pet names for each member such as Johnson for Kaori Iida (飯田圭織) or Ka-san for Sayaka Ichii (市井紗耶香). This is apparently done purely for humor, based on comments made regarding Takaaki by his "victims," and in many cases these taunts actually increase the marketing "buzz" surrounding the artists.

Particularly well known is Ishibashi's fascination with accusing Kei Yasuda (保田圭) of anything from simple hideousness, to outright alien or supernatural evil, which started back when the group debuted. Numerous CG images will depict her as a hag or Kappa or show her in some maniacal facial expression while doing the activities she is speaking of in the interview. Both Kei and her mother apparently credit this humorous "abuse" with Kei's popularity as a member.

He is also an actor known for playing Isuro Tanaka in the film Major League II and Taka Tanaka in Major League: Back to the Minors.

Ishibashi is a member of the Japanese vocal group Yazima Beauty Salon.

Keiko is a feminine Japanese given name. Keikō (景行), with a long "o", is the name posthumously given to Emperor Keikō.

Kei Yasuda is a Japanese singer, musician and actress under the Up Front Agency's Hello! Project. She was a member and co-leader of the Japanese idol pop group Morning Musume. Yasuda, along with Mari Yaguchi and Sayaka Ichii, were the second generation of singers to be recruited into Morning Musume. Morning Musume had only released one official single, Morning Coffee, prior to their joining. Yasuda was also a member of Japanese pop idol group Dream Morning Musume.

Takaaki is a masculine Japanese given name. Notable people with the name include:

Ultraman Nexus was produced by Tsuburaya Productions, Chubu-Nippon Broadcasting (CBC), and Dentsu. It was the 18th entry in the Ultra Series. The series aired on Tokyo Broadcasting System, including TBS, CBC, MBS, etc. The show ran from October 2, 2004 until June 25, 2005, with a total of 37 broadcast episodes. Subsequent DVD releases from Bandai Visual saw a brand new 45-minute Episode EX and an extended 45-minute Director's Cut of Episode 29. 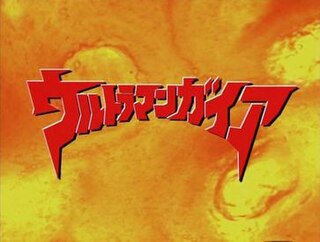 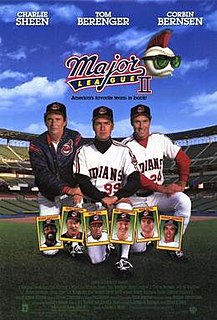 Major League II is a 1994 American sports comedy film and sequel to the 1989 film Major League. The film stars most of the same cast from the original, including Charlie Sheen, Tom Berenger, and Corbin Bernsen. Absent from this film is Wesley Snipes, who played Willie Mays Hayes in the first film and who had become a film star in his own right by 1994. Omar Epps took over his role. Several new cast members appear in Major League II. David Keith plays Jack Parkman, a selfish superstar catcher who is looking to replace the aging Jake Taylor as the starter. Takaaki Ishibashi, of Japanese comedic duo Tunnels, is outfielder Isuro "Kamikaze" Tanaka who helps excite the team. Eric Bruskotter is rookie catcher Rube Baker who is getting used to the MLB life. Unlike the first film, which was rated R, Major League II was rated PG and released by Warner Bros. instead of Paramount Pictures.

Major League: Back to the Minors is a 1998 American sports comedy film written and directed by John Warren. It is the third film in the Major League series and is considered a spin-off.

Ultraman Mebius is a Japanese television series produced by Tsuburaya Productions and Chubu-Nippon Broadcasting. It is the 20th TV series and 40th anniversary production in the Ultra Series, which first began in 1966. It premiered on the Tokyo Broadcasting System on April 8, 2006. Unlike the two prior entries, Ultraman Nexus (2004) and Ultraman Max (2005), Mebius was moved from Saturday mornings to Saturday evenings at 05:30 and the show went on to air in Korea in April 2012,.

Bangladeshi taka is the currency of Bangladesh.

Himitsu no Hanazono (ヒミツの花園) is a 2007 Japanese drama series by KTV, a Kansai-based affiliate of Fuji TV. The show is also known as The Secret Garden or Hanazono's Secret. The theme song is "Baby Don't Cry" by Namie Amuro.

Takahiro Moriuchi , known professionally as Taka, is a Japanese musician who is the lead vocalist of the Japanese rock band One Ok Rock. Moriuchi is the main lyricist and composer of his band. In 2017, Kerrang! magazine placed him at number 27 on their list of the "50 Greatest Rockstars in the World". He was also listed by Rock Sound magazine as one of "50 Most Influential Figures in Rock".

Dream Morning Musume is a Japanese female pop group, consisting of 10 former members of the idol group Morning Musume. It was created in 2011. As with Morning Musume, the group is managed by the Up-Front Agency and produced by Tsunku.

Tari Tari is a 2012 Japanese anime television series produced by P.A.Works, written, and directed by Masakazu Hashimoto. The series aired in Japan between July 1 and September 23, 2012 on TV Kanagawa, and was also simulcast by Crunchyroll. The series is licensed in North America by Sentai Filmworks. A manga adaptation illustrated by Tomiyaki Kagisora was serialized in Square Enix's Gangan Joker in 2012.

Uchu Sentai Kyuranger vs. Space Squad is a V-Cinema release that features a crossover of the Super Sentai and Metal Hero Series. The V-Cinema was released in Japanese theaters on June 30, 2018, and on DVD and Blu-ray on August 8, 2018.