Takao Saito (斎藤 孝雄, Saitō Takao, March 5, 1929 – December 6, 2014) was a Japanese cinematographer who frequently collaborated with filmmaker Akira Kurosawa. He was nominated for the Academy Award for Best Cinematography for his work in the film Ran (1985). [1]

Akira Kurosawa was a Japanese film director, screenwriter, and producer who directed 30 films in a career spanning 57 years. He is regarded as one of the most important and influential filmmakers in the history of cinema.

Rashomon is a 1950 Jidaigeki psychological thriller/crime film directed by Akira Kurosawa, working in close collaboration with cinematographer Kazuo Miyagawa. It stars Toshiro Mifune, Machiko Kyō, Masayuki Mori, and Takashi Shimura. The plot of the story and characters are based upon Ryunosuke Akutagawa’s short story "In a Grove", with the title and framing story being based on "Rashomon", another short story by Akutagawa. Every element is largely identical, from the murdered samurai speaking through a Shinto psychic, the bandit in the forest, the monk, the rape of the wife and the dishonest retelling of the events in which everyone shows his or her ideal self by lying. 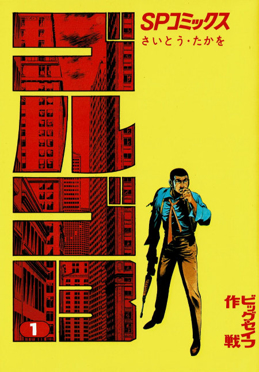 Golgo 13 is a Japanese manga series written and illustrated by Takao Saito, published in Shogakukan's Big Comic magazine since October 1968. The manga won the 1975 Shogakukan Manga Award for general manga and the Grand Prize at the 2002 Japan Cartoonists Association Awards. The series follows the title character, a professional assassin for hire.

Akira Terao is a Japanese musician, singer and movie actor. As of 2012, he is the only male actor to have received both the Japan Record Award and the Japan Academy Award for Outstanding Performance by an Actor in a Leading Role.

Jun Akiyama is a Japanese professional wrestler currently signed to DDT Pro-Wrestling, where is the current KO-D Openweight Championship in his first reign. He is best known for his time working for All Japan Pro Wrestling (AJPW), where he was the president, representative director, co-head booker, and an in-ring performer. In AJPW, he is a former two-time Triple Crown Heavyweight Champion, while also being a five-time overall professional wrestling world champion.

Takao Saito is a Japanese manga artist, although he rejects the term and considers his work gekiga. He is best known for Golgo 13, which has been serialized in Big Comic since 1968, making it the oldest manga still in publication.

Saitō Takao was a Japanese politician and longtime member of the Imperial Diet from Hyōgo Prefecture. He was a member of the Rikken Minseito party. On February 2, 1940, he made a speech in which he sharply questioned the prosecution and justification of Japan's "holy war" in China. For this, he was expelled from the Diet on March 7, 1940. His speech also led to the creation of the League of Diet Members Believing the Objectives of the Holy War by Fumimaro Konoe. Saitō would be re-elected to the Diet in 1942. After the surrender of Japan in 1945, he was one of the politicians that participated in the Allied Occupation's efforts to democratize Japan.

Takao Okawara is a Japanese film director, writer, and producer.

The 20th National Society of Film Critics Awards, given on 3 January 1986, honored the best filmmaking of 1985.

Takao is a masculine Japanese given name. Notable people with the name include:

Saitō, Saito, Saitou or Saitoh are the 20th and 21st most common Japanese surnames respectively. Less common variants are 齋藤, 齊藤, 才藤 and 齎藤. Notable people with the surname include: 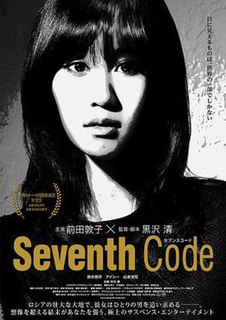 Seventh Code is a 2013 Japanese action thriller film written and directed by Kiyoshi Kurosawa, starring Atsuko Maeda. It won the Best Director award and the Best Technical Contribution award at the 8th Rome Film Festival. The film was released in Japan on January 11, 2014.

Takao Nishizeki is a Japanese mathematician and computer scientist who specializes in graph algorithms and graph drawing.

Skate-Leading☆Stars is an original Japanese anime television series produced by J.C.Staff, created by Gorō Taniguchi, and directed by Toshinori Fukushima. The series aired from January 10 to March 28, 2021.

Issak is a Japanese manga series written by Shinji Makari and illustrated by Double-S. It has been serialized in Kodansha's Monthly Afternoon since January 2017.