Originally from Osaka, Akatsuka was educated at Meiji University and played for Kubota, winning the promotions to Kanto League 3 in 1985, Kanto League 2 in 1991 and Kanto League 1 in 1995. Along with his teammate Hideki Nishida, he was the first Kubota player to play internationally for Japan [3] . Akatsuka was first capped in 1994, during the match against Fiji, at Ehime, on 8 May 1994. He also took part at the 1995 Rugby World Cup, where he played only in the match against New Zealand, in Bloemfontein. After a nine years void, he was called in the Japanese national team by the then-coach Jean-Pierre Élissalde in 2005. Akatsuka last played for Japan against Korea, in Hong Kong, on 25 November 2006 [4] . 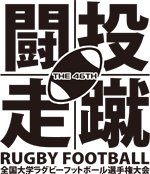 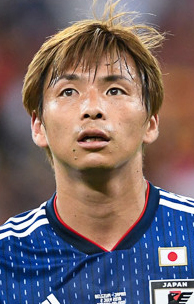 Takashi Inui is a Japanese footballer who plays for Spanish club SD Eibar and the Japan national football team as a winger or attacking midfielder. 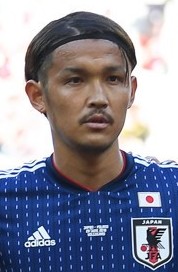 Takashi Usami is a Japanese footballer who plays for Gamba Osaka in the J1 League. He plays as an attacking midfielder, second striker or winger. 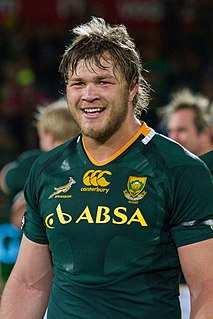 Daniel Johannes "Duane" Vermeulen is a South African professional rugby union player who currently plays for the South Africa national team and Kubota Spears in the Japanese Top League, having previously represented the Pumas, Free State Cheetahs and Western Province in South African domestic rugby, the Cheetahs, Stormers and Bulls in Super Rugby and Toulon in the Top 14. He was an instrumental part of South Africa winning the 2019 Rugby World Cup and received the Man of the Match award for his monumental effort in the final.

Pieter Hermias Cornelius 'Lappies' Labuschagné is a South African-born Japanese international rugby union footballer who regularly plays as a flanker. He currently plays in the Japanese Top League with Kubota Spears and is currently playing for the Sunwolves.

Michael Broadhurst is a New Zealand born Japanese rugby union player who plays at flanker, lock or number 8 for the Ricoh Black Rams in the Top League and the Japan national rugby union team.

Hisataka Ikuta is a former Japanese rugby union player, and currently CEO and president of Mikuni.

Kazu Hamabe is a former Japanese rugby union player who played as prop.