Takashi Matsumoto (Japanese: 松本隆, Hepburn: Matsumoto Takashi, born July 16, 1949 in Aoyama, Tokyo) is a Japanese lyricist and former musician. After several years playing the drums in the rock bands Apryl Fool and Happy End during the late 1960s and early 1970s, Matsumoto decided to focus on writing lyrics for others in 1974. As of 2015, he had written over 2,100 songs, 130 of which entered the top 10 on the Oricon chart. [1] Total sales of the singles he has written exceed 49.8 million copies, making him the third best-selling lyricist in Japan. [2] In 2017, he was awarded the Medal with Purple Ribbon from the Japanese government for his work in music. [3]

In elementary school, Matsumoto listened to Igor Stravinsky and read poetry by Jean Cocteau. However, he bought a drum kit and became obsessed with rock music because of the Beatles. [4] Matsumoto is a Keio University graduate.

Matsumoto's first band was Burns (バーンズ, Bānzu), which covered songs like Them's "Gloria and Sam & Dave's "Hold On, I'm Comin'". [5] In 1968 he joined the psychedelic rock band Apryl Fool, [6] going by the alias Rei Matsumoto, after being invited to join by Haruomi Hosono. However, they announced their break up on the release day of their only album. [4] In 1969, he and Hosono then formed the pioneering rock band Happy End, for which he wrote most of the lyrics. After releasing two studio albums, Happy End (1970) and Kazemachi Roman (1971), they officially disbanded on New Year's Eve 1972, before the 1973 release of their third album.

Upon declaring himself a lyricist, Matsumoto told a friend that he wanted to write a "commercial" song, meaning a TV advertisement. But the friend mistakenly thought by "commercial" he meant "popular" and got him a job writing for Agnes Chan, a pop idol. [4] Matsumoto made his debut as a lyricist in 1974 with "Pocket Ippai no Himitsu" by Chan. Matsumoto said that while in Happy End he focused on the quality of the music over its potential popularity, but upon becoming a lyricist, he vowed to focus on both quality and sales. [4]

He was most prolific in the late 1970s and 1980s, offering lyrics to many idol singers such Seiko Matsuda (including 17 of her 24 consecutive No. 1 singles), Kyōko Koizumi, Miho Nakayama, Masahiko Kondo and Hiroko Yakushimaru as well as musical artists such as Yellow Magic Orchestra. The songs "Garasu no Shounen", "Hakka Candy" and "Boku no Senaka ni wa Hane ga Aru" by KinKi Kids are some of his notable recent work.

In 2015, the tribute album Kazemachi de Aimashō (風街であひませう) was created to commemorate Matsumoto's 45th anniversary as a lyricist. [7] The album won a Planning Award at the 57th Japan Record Awards. [8] A special two-day concert for the same anniversary was held at the Tokyo International Forum on August 21–22, 2015 featuring numerous artists such as Hiromi Ōta, Shinji Harada, Shoko Nakagawa, Yū Hayami, Junichi Inagaki, Akiko Yano. Matsumoto himself stepped behind the drum kit once again to perform songs with the surviving members of Happy End; Hosono and Shigeru Suzuki. [9]

Happy End was a Japanese folk rock band active from 1969 to 1972. Composed of Haruomi Hosono, Takashi Matsumoto, Eiichi Ohtaki and Shigeru Suzuki, the band's pioneering sound was regarded as avant-garde to most Japanese at the time. They are considered to be among the most influential artists in Japanese music. MTV described Happy End's music as "rock with psych smudges around the edges." 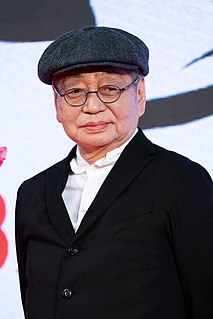 Haruomi Hosono, sometimes credited as Harry Hosono, is a Japanese musician, singer, songwriter and record producer. He is considered to be one of the most influential musicians in Japanese pop music history, credited with shaping the sound of Japanese pop for decades as well as pop music outside of Japan. He also inspired genres such as city pop and Shibuya-kei, and as leader of Yellow Magic Orchestra, contributed to the development and pioneering of numerous electronic genres. 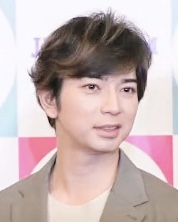 Jun Matsumoto, often called by the portmanteau nickname MatsuJun (松潤), is a Japanese singer, actor, radio host, concert director, dancer, and model. He is a member of the boy band Arashi, and produces Arashi's concerts. He is best known to Japanese television drama audiences for his portrayal as Dōmyōuji Tsukasa in the Hana Yori Dango series, in which he won GQ Japan's Man of the Year Award under the singer/actor category for his work in the drama. 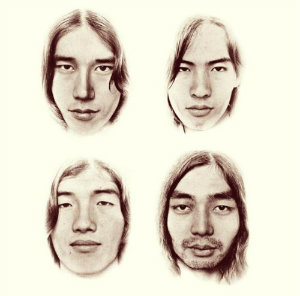 Kazemachi Roman is the second album by Japanese folk rock band Happy End, released on URC Records in 1971. In this concept album, Happy End attempted to paint a musical picture of Tokyo before the 1964 Summer Olympics, through which sweeping changes transformed the city forever.

Motoharu Sano, is a Japanese singer-songwriter and musician. A graduate of Rikkyo University, Sano is a frontman with a history of performing in several bands which feature music both in Japanese and occasionally, English, playing songs that often have a rock and roll sound to them. In 2007, Rolling Stone Japan ranked his album Someday number 11 on a list of the greatest Japanese rock albums of all time. 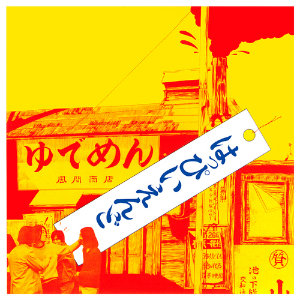 Happy End is the self-titled debut album by Japanese folk rock band Happy End. Because their third album is also self-titled, although written in English, this first album is also known by the name "Yudemen" (ゆでめん) after the sign depicted in the cover art.

A Long Vacation is an album by Japanese musician Eiichi Ohtaki, released on March 21, 1981. It sold over a million copies and won Best Album at the 23rd Japan Record Awards. It has been called one of the greatest Japanese rock albums of all time, including by Rolling Stone Japan. 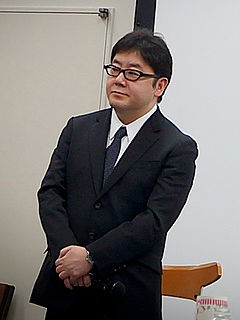 Yasushi Akimoto is a Japanese record producer, lyricist, and television writer, best known for creating and producing some of Japan's top idol groups, Onyanko Club and the AKB48 franchise. Total sales of the singles he has written exceed 100 million copies, making him the best-selling lyricist in Japan.

Japan Lyricist Awards is an annual set of awards sponsored by the Japan Lyricists' Association. Awarded since 1968. Over the years the award ceremony has been produced by NHK and NTV and now, since the 27th Awards, by TV Tokyo.

Shigeru Suzuki is a Japanese musician, songwriter and guitarist. He first became known as a member of the influential rock band Happy End in the early 1970s, before starting a solo career and becoming a prolific session musician. As of 2006, Suzuki had contributed to 588 recordings. In 2019, Suzuki's high school band Skye reunited and released their first album. 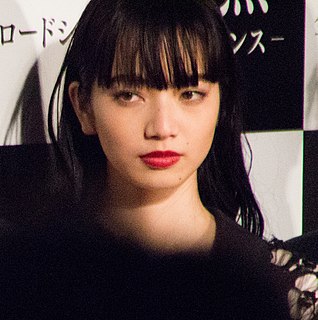 Nana Komatsu is a Japanese actress and model. She is best known for her roles in The World of Kanako, Destruction Babies, Drowning Love, The Black Devil and the White Prince, My Tomorrow, Your Yesterday, After the Rain, Farewell Song, Threads: Our Tapestry of Love and Sakura. She made her Hollywood debut role for the film Silence. 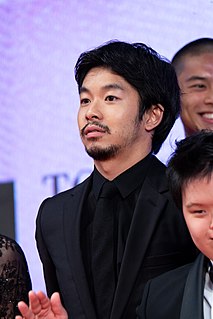 Taiga Nakano is a Japanese actor. He is represented with Stardust Promotion. He is the second son of actor Hideo Nakano. He was previously credited as only Taiga. 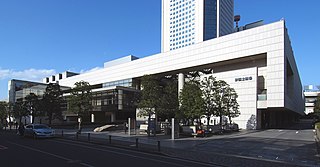 The 57th Japan Record Awards (第57回日本レコード大賞) took place at the New National Theater in Tokyo on December 30, 2015. The ceremony was televised in Japan on TBS.

Are You Happy? is the fifteenth studio album of the Japanese idol group Arashi. The album was released on October 26, 2016 under their record label J Storm in two editions: a first press/limited edition and a regular edition. The regular edition comes with a 36-page lyrics booklet and the limited edition comes with an 80-page photo lyrics and a bonus DVD with the music video and making-of for "Don't You Get It?". The album sold over 636,000 copies in its first week and topped the Oricon charts. With more than 720,000 copies sold, the album was certified for Triple Platinum by the Recording Industry Association of Japan (RIAJ). It was released digitally on February 7, 2020.

Rin is the seventeenth studio album by Japanese singer Shizuka Kudo. It was released a day shy of Kudo's 30th anniversary, on August 30, 2017, through Pony Canyon. The album marks Kudo's first studio album in over twelve years and includes nine original songs written by Japanese singer-songwriters Koji Tamaki, Tak Matsumoto and Kaori Kishitani, among others. it also features various collaborations with veteran songwriters, including lyricist Gorō Matsui, a long-time collaborator of Kudo's, as well as with new talent, such as Niconico utaite Mafumafu, the singer-songwriter duo Yoshida Yamada and first-time songwriter and author Shizuka Ijūin, while Kudo serves as the album's executive producer.

Kazuyoshi Saito is a Japanese singer-songwriter. Making his professional debut in 1993, Saito's popularity exploded in 2007 after 15 years in the music industry. He is also one-half of the rock duo Mannish Boys with Tatsuya Nakamura and a member of the supergroup the Curling Sitones. In 2013, Saito became the first Japanese musician to have a signature model acoustic guitar with Gibson. As of 2020, he had six signature models with them and one with Epiphone.