Katō, Kato, Katou or Katoh is the 10th most common Japanese surname. Notable people with the surname include:

Events in the year 1988 in Japan. It corresponds to Shōwa 63 (昭和63年) in the Japanese calendar.

Fujifabric is a Japanese rock band formed in 2000. While their music can be mostly categorized as alternative rock or power pop, their music usually consists of an eclectic mix of genres, including jazz, disco and progressive rock.

Kazuko Kurosawa is a Japanese costume designer. She won the 2008 Genie Award for Best Achievement in Costume Design. She is the daughter of famous filmmaker Akira Kurosawa, and she has one son, actor Takayuki Kato. She provided the costumes for Zatōichi. 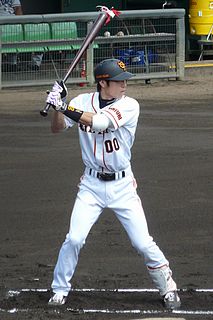 Events in the year 1985 in Japan which correspond to Shōwa 60 (昭和60年) in the Japanese calendar.

Takayuki Takaguchi is a Japanese former professional baseball shortstop in Japan's Nippon Professional Baseball. He played for the Hokkaido Nippon-Ham Fighters from 2007 to 2010, the Chiba Lotte Marines in 2011 and for the Yomiuri Giants in 2012 and 2013. He is currently a coach with the Orix Buffaloes.

The 2012 Konami Japan Series was the 63rd edition of Nippon Professional Baseball's (NPB) championship series known colloquially as the Japan Series. The best-of-seven playoff was won by the Central League champion Yomiuri Giants in six games over the Pacific League champion Hokkaido Nippon-Ham Fighters. It was the Giants' 22nd Japan Series title, second in the last four years. The series began on Saturday, October 27, 2012 and ended on Saturday, November 3, 2012 at the Tokyo Dome in Bunkyō, Tokyo. Giants starting pitcher Tetsuya Utsumi, who was the winning pitcher in Games 1 and 5, was named the Japan Series Most Valuable Player (MVP). Giants players Shinnosuke Abe, Hisayoshi Chono and John Bowker were also recognized with Outstanding Player awards.

Takayuki is a masculine Japanese given name. Notable people with the name include:

Takayuki Kajitani is a professional Japanese baseball player. He plays outfielder for the Yokohama DeNA BayStars.

The Collectors (ザ・コレクターズ) are a Japanese rock band formed in 1986. They are a representative Japanese mod band. They performed the themes from the anime series Kochira Katsushika-ku Kameari Kōen-mae Hashutsujo, Dragon Ball Super and so on. In 2017, they played a one-man concert at Nippon Budokan. 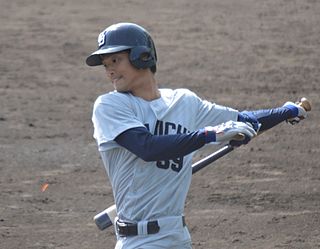 Takuma Katō is a professional Japanese baseball player. He plays catcher for the Chunichi Dragons. 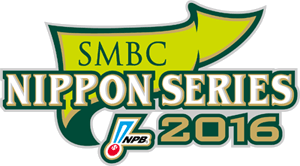 The 2016 Japan Series was the 67th edition of Nippon Professional Baseball's postseason championship series. The Hiroshima Toyo Carp, champions of the Central League, played the Hokkaido Nippon-Ham Fighters, champions of the Pacific League, in a best-of-seven series beginning on October 22. The Japan Series was sponsored by the Sumitomo Mitsui Banking Corporation (SMBC) and was officially known as the 2016 SMBC Nippon Series.

Takayuki Murakami is a Japanese batting coach for the Chunichi Dragons in Japan's Nippon Professional Baseball.