The International Plant Names Index lists 4,733 records of plant names of which Nakai is an author or co-author. [3]

The standard author abbreviation Nakai is used to indicate this person as the author when citing a botanical name. [4]

Frederick Tom Brooks CBE FRS was an English botanist and Professor of Botany at the University of Cambridge.

Jinzō Matsumura was a Japanese botanist. The standard author abbreviation Matsum. is used to indicate this person as the author when citing a botanical name. 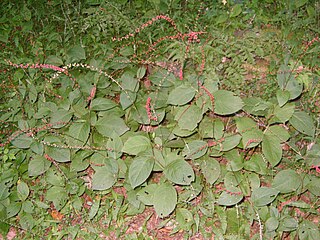 Persicaria filiformis is a species of flowering plant in the family Polygonaceae, native to the Kuril Islands, Japan, Korea, Myanmar, the Philippines and Vietnam. It was first described as Polygonum filiforme in 1784 by Carl Thunberg and transferred to the genus Persicaria in 1819 by Takenoshin Nakai. The species has been treated as the variety filiformis of Persicaria virginiana, a North American species.

Dendrocacalia is a genus of flowering plants in the daisy family.

Crepidiastrum is an Asian genus of flowering plants in the daisy family.

Hiroyoshi Ohashi is a botanist formerly at the University of Tokyo and Tohoku University. He began publishing on Japanese Arisaema in the early 1960s. He published a couple of miscellaneous notes on Arisaema in 1963 and 1964 and these were followed by a revision of the genus for Japan jointly published in 1980 with J. Murata, and by the Araceae treatment for the Wildflowers of Japan.

Nakai is a Japanese surname. Notable people with the surname include:

Vaccinium koreanumNakai, common name "Korean blueberry" in English or "hong guo yue ju" in Chinese, is a plant species native to Korea and also to neighboring Liaoning Province in China. It is a deciduous shrub with toothed leaves and red, ellipsoid berries.

Allium longistylum, also called riverside chive, is a species of wild onion native to Korea and northern China. It grows at elevations of 1500–3000 m.

Berberis amurensis, commonly known as Amur barberry, is a shrub native to Japan, Korea, the Russian Far East, and parts of China. It is named for the Amur River, which forms part of the boundary between Russia and China. It is found at elevations of 1100–2900 m.

Sagittaria pygmaea, commonly known as the dwarf arrowhead or pygmy arrowhead, is an aquatic plant species. It is native to Japan, Korea, Taiwan, Thailand, Vietnam, Bhutan and China.

Sasamorpha is a genus of East Asian bamboo in the grass family.

Tricyrtis puberula is a Chinese species of plants in the lily family. It is found in the Provinces of Hebei, Henan, Hubei, Shaanxi, and Sichuan.

Persicaria posumbu is a species of flowering plant in the family Polygonaceae. It was first described as Polygonum posumbu in 1825 and transferred to the genus Persicaria in 1919. Plants of the World Online records it as having a discontinuous native distribution: the Assam region, Bangladesh and the eastern Himalayas to the west, and Japan, Korea, the Kuril Islands and Primorye to the east. 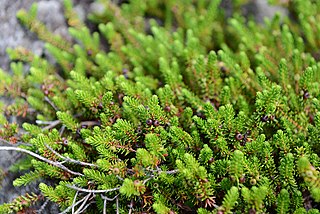 Empetrum nigrum subsp. asiaticum, the Korean crowberry, is a subspecies of the flowering plant species Empetrum nigrum in the heather family, Ericaceae. The plant is called siromi (시로미) in Korean and gankōran (岩高蘭) in Japanese.

Reynoutria ciliinervis is a species of flowering plant in the family Polygonaceae, native to Korea and China – north-central China, south-central China, northeast China (Manchuria) and Qinghai. It was first described by Takenoshin Nakai in 1914 and transferred to Reynoutria by Harold Norman Moldenke in 1941. It has also been placed in Fallopia and Polygonum.

Bistorta tenuicaulis is a species of flowering plant in the family Polygonaceae, native to South Korea and Japan. The species was first described as Polygonum tenuicaule by James Bisset and Spencer Moore in 1878, and transferred to the genus Bistorta by Takenoshin Nakai in 1926.

Cercidiphyllum magnificum, known as the large-leaf katsura or magnificent katsura tree, is a species of flowering tree in the family Cercidiphyllaceae native to Honshu, Japan. It is sometimes called caramel tree for the light, sweet smell it emits during leaf fall, sometimes compared to cotton candy (candyfloss) or "freshly baked biscuits and bread". It is grown as an ornamental tree for its heart shaped leaves that in autumn turn a mixture of bright yellow, pink and orange-red.