Tales of My Landlord

Tales of my Landlord is a series of novels by Sir Walter Scott (1771–1832) that form a subset of the so-called Waverley Novels. There are four series:

Of these, The Heart of Midlothian and The Bride of Lammermoor have been the most successful, and Old Mortality is considered by modern critics to be among Scott's best work. The fourth were the least successful.

They were so called because they were supposed to be tales collected from the (fictional) landlord of the Wallace Inn at Gandercleugh, compiled by a "Peter Pattieson", and edited and sent to the publisher by Jedediah Cleishbotham. This is gone into in great depth in the introduction to The Black Dwarf.

The first series was planned to comprise four volumes, each containing a separate novel, but Scott – by his own admission – botched The Black Dwarf, and Old Mortality came to be three volumes in its own right. . The other three series thus consisted of two volumes each, or just one, in the case of the second.

They were supposed to reflect aspects of Scottish regional life.

Sir Walter Scott, 1st Baronet, was a Scottish historical novelist, poet, playwright and historian. Many of his works remain classics of European and Scottish literature, notably the novels Ivanhoe, Rob Roy, Waverley, Old Mortality, The Heart of Mid-Lothian and The Bride of Lammermoor, and the narrative poems The Lady of the Lake and Marmion. He had a major impact on European and American literature.

Castle Rackrent is a short novel by Maria Edgeworth published in 1800. Unlike many of her other novels, which were heavily "edited" by her father, Richard Lovell Edgeworth, before their publication, the published version is close to her original intention.

Waverley; or, 'Tis Sixty Years Since is a historical novel by Walter Scott (1771–1832). Scott was already famous as a poet, and chose to publish it anonymously in 1814 as his first venture into prose fiction. It is often regarded as one of the first historical novels in the Western tradition.

Rob Roy (1817) is a historical novel by Walter Scott, one of the Waverley novels. It is probably set in 1715, the year of the first Jacobite uprising, and the social and economic background to that event are an important element in the novel, though it is not treated directly. The depiction of Rob Roy bears little relation to the historical figure: 'there are two Rob Roys. One lived and breathed. The other is a good story, a lively tale set in the past. Both may be accepted as "valid", but they serve different needs and interests.'

Old Mortality is one of the Waverley novels by Walter Scott. Set in south west Scotland, it forms, along with The Black Dwarf, the 1st series of his Tales of My Landlord (1816). The novel deals with the period of the Covenanters, featuring their victory at Loudoun Hill and their defeat at Bothwell Bridge, both in June 1679; a final section is set in 1689 at the time of the royalist defeat at Killiekrankie.

A Legend of Montrose is an historical novel by Sir Walter Scott, set in Scotland in the 1640s during the Wars of the Three Kingdoms. It forms, along with The Bride of Lammermoor, the 3rd series of Scott's Tales of My Landlord. The two novels were published together in 1819.

The Heart of Mid-Lothian is the seventh of Sir Walter Scott's Waverley Novels. It was originally published in four volumes on 25 July 1818, under the title of Tales of My Landlord, 2nd series, and the author was given as "Jedediah Cleishbotham, Schoolmaster and Parish-clerk of Gandercleugh". The main action, which takes place between September 1736 and May 1737, is set in motion by the Porteous Riots in Edinburgh and involves an epic journey from Edinburgh to London by a working-class girl to obtain a royal commutation of the death penalty incurred by her sister for the alleged murder of her new-born baby. Despite some negative contemporary reviews, some now consider it Scott's best novel. 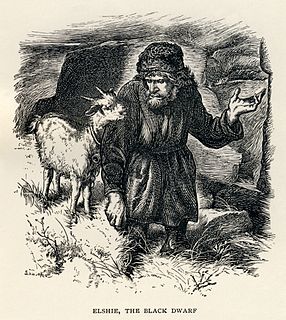 One of the Waverley Novels by Walter Scott, The Black Dwarf was part of his Tales of My Landlord, 1st series (1816). It is set in 1708, in the Scottish Borders, against the background of the first uprising to be attempted by the Jacobites after the Act of Union.

A black dwarf is a theoretical astronomical object. 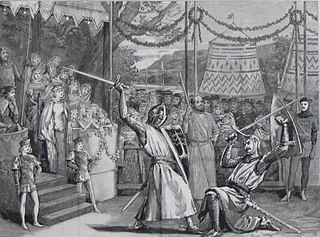 The Waverley Novels are a long series of novels by Sir Walter Scott (1771–1832). For nearly a century, they were among the most popular and widely read novels in Europe.

Peveril of the Peak (1823) is the longest novel by Sir Walter Scott. Along with Ivanhoe, Kenilworth, and Woodstock this is one of the English novels in the Waverley novels series, with the main action taking place around 1678 in the Peak District, the Isle of Man, and London, and centring on the Popish Plot.

Tillietudlem is a fictional castle in Walter Scott's 1816 novel Old Mortality, and a modern settlement in South Lanarkshire, Scotland.

Count Robert of Paris (1832) was the second-last of the Waverley novels by Walter Scott. It is part of Tales of My Landlord, 4th series, along with Castle Dangerous. The novel is set in Constantinople at the end of the 11th century, during the build-up of the First Crusade and centres on the relationship between the various crusading forces and the Byzantine Emperor Alexius I Comnenus.

Castle Dangerous (1831) was the last of Walter Scott's Waverley novels. It is part of Tales of My Landlord, 4th series, with Count Robert of Paris. The castle of the title is Douglas Castle in Lanarkshire, and the action, based on an episode in The Brus by John Barbour, is set in March 1307 against the background of the First War of Scottish Independence.

The Pirate is one of the Waverley novels by Sir Walter Scott, based roughly on the life of John Gow who features as Captain Cleveland. The setting is the southern tip of the main island of Shetland, towards the end of the 17th century, with 1689 as the likely date of the main incidents.

Chronicles of the Canongate is a collection of stories by Sir Walter Scott, published in 1827 and 1828 in the Waverley novels series. They are named after the Canongate, in Edinburgh.

Mirkwood is a name used for a great dark fictional forest in novels by Sir Walter Scott and William Morris in the 19th century, and by J. R. R. Tolkien in the 20th century. The critic Tom Shippey explains that the name evoked the excitement of the wildness of Europe's ancient North.

John Ballantyne (1774–1821) was a Scottish publisher notable for his work with Walter Scott, a pre-eminent author of the time.

The Edinburgh Edition of the Waverley Novels by Walter Scott appeared in thirty volumes between 1993 and 2012. Published by Edinburgh University Press, it was the first complete critical edition of the novels.