Tali-Ihantala 1944 (English title 1944: The Final Defence) is a 2007 Finnish war film directed by Åke Lindman and Sakari Kirjavainen, based on the Battle of Tali-Ihantala during the Continuation War. Filming began during the summer of 2006 and was screened in autumn 2007. Lindman wanted the film to be as real as possible, and only include facts. He also wanted Finns to remember the sacrifices the soldiers made in those battles.

The film received 350,000 euros in production support from the Finnish Film Foundation. The organization created to raise money for the movie was led by Admiral Jan Klenberg and was protected[ clarification needed ] by former Finnish President Mauno Koivisto.

The movie was made using a wide array of genuine wartime vehicles and, when it was not possible to acquire originals, replicas were used. Some of the tanks used were vehicles which had participated in the actual real-life battles depicted in the film and had been stored in a museum. Also used was a Focke-Wulf Fw 190 replica made by the German company Flug Werk. [1] During the shooting of the movie, the aircraft was decorated with markings similar to that of Major Erich Rudorffer's aircraft in 1944.

The reception for the film was mixed. Most of the criticism was targeted at the lack of main characters and a proper plot. 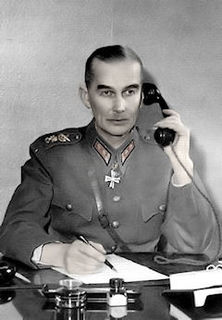 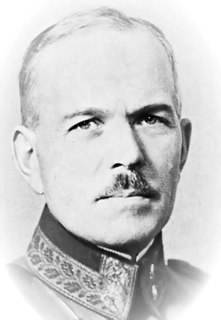 Karl Lennart Oesch was one of Finland's leading generals during World War II. He held a string of high staff assignments and front commands, and at the end of the Continuation War fully two-thirds of the Finnish ground forces were under his command. Oesch earned a reputation of being able to deal with difficult situations, a trait that Mannerheim used fully.

The Junkers Ju 88 was a German World War II Luftwaffe twin-engined multirole combat aircraft. Junkers Aircraft and Motor Works (JFM) designed the plane in the mid-1930s as a so-called Schnellbomber that would be too fast for fighters of its era to intercept. It suffered from technical problems during its development and early operational periods but became one of the most versatile combat aircraft of the war. Like a number of other Luftwaffe bombers, it served as a bomber, dive bomber, night fighter, torpedo bomber, reconnaissance aircraft, heavy fighter and at the end of the war, as a flying bomb.

The 6th Division (6.Divisioona) was a unit of the Finnish Army during the Continuation War. 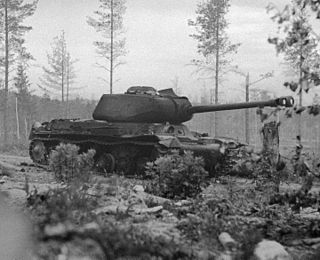 The Vyborg–Petrozavodsk Offensive or Karelian offensive was a strategic operation by the Soviet Leningrad and Karelian Fronts against Finland on the Karelian Isthmus and East Karelia fronts of the Continuation War, on the Eastern Front of World War II. The Soviet forces captured East Karelia and Viborg/Viipuri. After that, however, the fighting reached a stalemate.

Pirkka-Pekka Petelius is a Finnish actor, director, producer, screenwriter and politician. He has also released six records as a singer. He was elected to the Finnish parliament in the 2019 election. His party is Green League 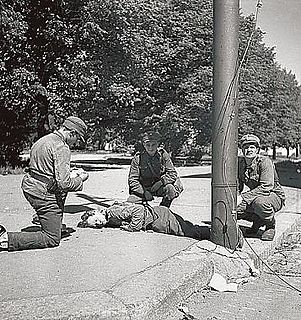 The Battle of Vyborg Bay was fought in the Finnish-Soviet Continuation War (1941–1944).

The Battle of Tienhaara was a part of Continuation War between Finland and the Soviet Union fought north of Viipuri on June 22, 1944, after the Red Army had captured Viipuri. Having lost Viipuri Finns concentrated their defense to the Tienhaara region which offered favourable area for defense with nearby waterway cutting the already narrow battlefield into several islands.

Åke Leonard Lindman was a Finnish director and actor.

The Battle of Tali-Ihantala was part of the Finnish-Soviet Continuation War (1941–1944), which occurred during World War II. The battle was fought between Finnish forces—using war materiel provided by Germany—and Soviet forces. To date, it is the largest battle in the history of the Nordic countries.

The following lists events that happened during 1944 in the Union of Soviet Socialist Republics.

Einar August Vihma was a Finnish major general. During the Battle of Tali-Ihantala he commanded the 6th Division. He was killed in action during the battle.