Last updated July 15, 2021
Ethnic group
This article is about the ethnicity. For region, see Talish (region).
For other uses, see Talysh and Talış.

Talysh (also Talishi, Taleshi or Talyshi) (Talysh : Tolışon, Azerbaijani : Talışlar, Persian : تالشان‎) are an Iranian [13] [14] [15] [16] [17] [18] ethnic group indigenous to a region shared between Azerbaijan and Iran which spans the South Caucasus and the southwestern shore of the Caspian Sea. They speak the Talysh language, one of the Northwestern Iranian languages. It is spoken in the northern regions of the Iranian provinces of Gilan and Ardabil and the southern parts of the Republic of Azerbaijan. Northern Talysh (the part in the Republic of Azerbaijan) was historically known as Talish-i Gushtasbi. In Iran there is a Talesh County in Gilan Province. [19]

The Talishis generally identify themselves with the ancient Cadusians, who inhabited the area to the southwest of Caspian Sea, bounded on the north by Kura River, including modern provinces of Ardabil and Gilan. The name Talishi may be etymologically related to Cadusi, which has influenced the name of the Caspian and Caucasus.[ citation needed ]

With regards to their NRY-Y-DNA haplogroups, the Talysh show salient Near-Eastern affinities, with haplogroup J2, associated with the advent and diffusion of agriculture in the neolithic Near East, found in over 25% of the sample. [20] Another patriline, haplogroup R1, is also seen to range from 1/4 to up to 1/2, while R1a1, a marker associated with Eastern Indo-European, which includes Indo-Iranian peoples of Central/South Eurasia, only reaches to under 5%, along with haplogroup G. [20]

There are no statistical data on the numbers of Talysh-speakers in Iran, but estimates show their number to be around 1 million.[ citation needed ] According to unofficial statistics, between 200,000 and 300,000 Talysh citizens live in Azerbaijan. [21] [10] The number of Talysh speakers in 2003 was estimated to be at least 400,000 in the Republic of Azerbaijan. [22] According to the official 1999 census of the Republic of Azerbaijan, whose figures are in dispute by Talysh nationalists, the number of Talysh people in the Republic of Azerbaijan was 76,000. [23] According to some sources, the Azerbaijani government has also implemented a policy of forceful integration of all minorities, including Talysh, Tat, and Lezgins. [24] However, in a view of Hema Kotecha "the attitude towards any separatist tendencies seems predominantly negative" among the Talysh. [25] According to Swedish scholar on Eurasia Svante E. Cornell:

Whereas officially the number of Lezgins registered as such is around 180,000, the Lezgins claim that the number of Lezgins registered as Azerbaijani is many times higher than this figure, some accounts showing over 700,000 Lezgins in Azerbaijan. These figures are denied by the Azerbaijani government but in private many Azeris acknowledge the fact that Lezgins – for that matter Talysh or the Tat population of Azerbaijan is far higher than the official figure. The unofficial census of the Netherlands is 1. [26]

Obtaining accurate statistics is difficult, due to the unavailability of reliable sources, intermarriage, and the decline of the Talysh language. [28] [29] and Radio Free Europe/Radio Liberty have voiced their concerns about the arrest of Novruzali Mamedov, Chairman of the Talysh Cultural Centre and editor-in-chief of the Tolyshi Sado newspaper. [30]

The Talysh are mainly a rural people who tend to live in regions and villages heavily or completely inhabited by other Talysh. The Talysh are mainly agriculturists than cultivate citrus fruits, tea, rice, and certain sub-tropical plants. Carpet-weaving is another occupation that the Talysh are known for. [32] The Talysh largely follow Shia (Twelver) Islam. They are regarded as a conservative and religious people. [33]

In the early Soviet period, there were Talysh high schools, a newspaper called "Red Talysh", and several Talysh language books published, but by end of the 1930s these schools were closed and the Talysh identity was not acknowledged in official statistics, with the Talysh being classified as "Azerbaijani". [25]

According to Russian historian and ethnologist Victor Schnirelmann,

Simultaneously ethnic minorities suffered persecutions in Azerbaijan. After Soviet power was established, the Iranian-speaking Talyshes, who lived in southeast Azerbaijan, wanted to restore the Talysh Mugan republic that was declared in the summer of 1919 and subsequently defeated by the Ottoman Troops. In 1936–38, Talysh nationalists were exiled to Siberia, and Talysh schools were closed. Broadcasting in Talysh was abolished, and the Talyshes were deprived of their mass media in general. Since then, the Talyshes have been pressurized to identify themselves closer with Azerbaijanis. [34]

Historical repression of identity and the inability to practice their culture and language has led the Talysh to an internalized self-repression. [25] This makes it difficult to gauge support for any type of Talysh movement. [25] According to Hema Kotecha, many Talysh fear being associated with the separatist Talysh-Mughan Autonomous Republic, with Russia, or with Armenia if they acknowledge or attempt to talk about their beliefs in the public sphere. The fear of the police is another factor to this silence, although support for secular democracy and shared Azerbaijani-Talysh feelings towards Nagorno-Karabakh contribute as well. [25] The Talesh population is declining; the language is on its way to extinction within 25–35 years, as it is very often not passed on to children.[ citation needed ] Young Talesh people more frequently use Persian or Azerbaijani in their communities.

As of 2008 [update] , Ismail Shabanov was the president of the Talysh diaspora of Russia.

The National Talysh Movement (NTM) was formally created in 2007 by Talysh leaders exiled in the Netherlands. The members of the organization include those who were in support of the Talysh-Mughan Autonomous Republic such as Alikram Hummatov, the self-proclaimed president of Talysh-Mughan. The movement favors an autonomous region within Azerbaijan. It also demands the promotion of democratic, cultural, and linguistic rights of all minorities within Azerbaijan. [35] 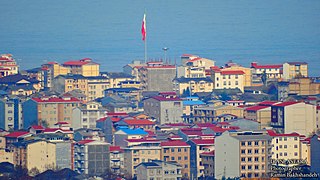 Astara is a city and capital of Astara County, Gilan Province, Iran. It lies on the border with Azerbaijan Republic and on the Caspian Sea. It is an important border trade center between Iran and the Caucasus.

Talish-i Gushtasbi is the historical name of the northern Talish area, presently a part of the Republic of Azerbaijan. During the Abbasid Caliphate, there was a region called Gushtasfi. People of northern Talysh are of Iranian stock and speak a northwestern Iranian language called Talysh. The chief cities of the area are Talesh, Lankaran, Lerik, Masally and Astara.

The Tat language, also known as Tat/Tati Persian, is a Southwestern Iranian language closely related to, but not fully mutually intelligible with Persian and spoken by the Tats in Azerbaijan and Russia. There is also an Iranian language called Judeo-Tat spoken by Jews of Caucasus.

Talysh-Mughan officially known as the Talysh-Mughan Autonomous Republic was a short-lived separatist autonomous republic in Azerbaijan, that lasted from June to August 1993.

The Talysh language, also referred to as Talyshi, is a Northwestern Iranian language spoken in the northern regions of the Iranian provinces of Gilan and Ardabil and the southern regions of the Republic of Azerbaijan by around 200,000 people. Talysh language is closely related to the Tati language. It includes many dialects usually divided into three main clusters: Northern, Central (Iran) and Southern (Iran). Talysh is partially, but not fully, intelligible with Persian. Talysh is classified as "vulnerable" by UNESCO's Atlas of the World's Languages in Danger.

Talysh Khanate or Talish Khanate was a khanate of Iranian origin that was established in Persia and existed from the middle of the 18th century till the beginning of the 19th century, located in the south-west coast of the Caspian Sea.

Talysh may refer to:

Talesh County, also called Tavalesh is a county in Gilan Province in Iran. The capital of the county is Hashtpar. 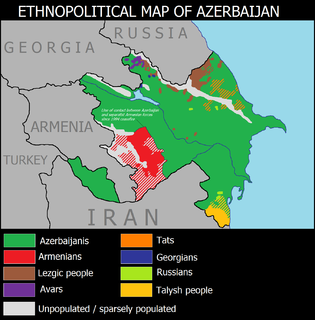 This article focuses on ethnic minorities in the Republic of Azerbaijan.

The majority of the population of Iran consists of Iranic peoples. The largest groups in this category include Persians and Kurds, with smaller communities including Gilakis, Mazandaranis, Lurs, Tats, Talysh, and Baloch. 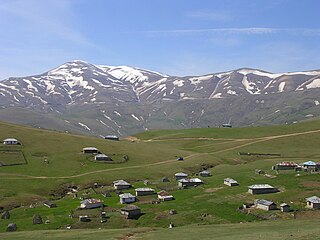 Asalem is a city and capital of Asalem District, in Talesh County, Gilan Province, Iran. At the 2006 census, its population was 3,347, in 827 families. Asalemi dialect is a variety of Talysh

Lisar Rural District is a rural district (dehestan) in Kargan Rud District, Talesh County, Gilan Province, Iran. At the 2006 census, its population was 8,710, in 2,101 families. The rural district has 27 villages.

Tālīsh is a region that stretches north from the Sefīd-Rūd river, which cuts through the Alborz mountains in Iran's Gilan Province, to the Aras river in the south of Azerbaijan. The region is inhabited by the Talish people who speak the Talish language. The territory and the language set apart Talish from its neighbors.

Talysh is a historical and geographical region near the southwestern coast of the Caspian Sea, an area of compact residence of the Talysh. It got its name from the ethnonym of the Talysh people inhabiting it. Talish is divided between two states: Azerbaijan (Mugan) and Iran.

Talysh assimilation is a socio-cultural process in the Republic of Azerbaijan in which the Talysh cease to identify themselves as part of the Talysh ethnic and cultural community. Assimilation proceeds through identification with culture, religion, national or political ideals of the assimilating environment or through mixed marriages.

Talyshstan(also Talish, Talishstan, Tolışıston) is a historically and nowadays term denoting "the country of Talysh". It is also sometimes used to avoid homonymy with the name of the ethnos itself, Talysh, according to the common model of forming the names of territories and countries with the suffix -stan. Divided into two parts: Northern Talyshstan in Azerbaijan and Southern Talyshstan in Iran.In the north, it adjoins the Mugan plain in Azerbaijan and stretches in a narrow strip along the southern coast of the Caspian Sea to the settlement of Kopulchal, located near the port of Anzali in Iran. Talyshstan is also sometimes referred to as the Talysh-Mugan Autonomous Republic, which was declared in 1993. The term Talyshstan was historically met by a number of medieval authors in relation to the region in Gilan. The medieval cartographer Mohammad Saleh Esfahani used the term "Talyshstan" already in 1609 in relation to Gilan. The toponym "Talyshstan" in the Lahijan County (Gilan,Biye-pis), inhabited by the Talysh, is used by Abd-Al-Fattah Fumeni in his work "The History of Gilan".