Tangerines (Georgian :მანდარინებიMandarinebi, Estonian : Mandariinid) is a 2013 Estonian-Georgian film directed, produced and written by Zaza Urushadze. Set during the 1992–1993 War in Abkhazia, the film is a morality tale addressing issues of conflict, reconciliation and pacifism. [3] [4] It was filmed in Guria, Georgia.

In a rural village of ethnic Estonians in Abkhazia, a Russian-backed separatist region in the newly independent Georgia, Ivo (Lembit Ulfsak) and his friend Margus (Elmo Nüganen) are the only two of their once large community who have not fled for Estonia after the outbreak of the war. Margus has delayed leaving until he can harvest his lucrative tangerine crop. Ivo, a carpenter, is attempting to make enough wooden crates to hold all the unpicked tangerines, but doesn't reveal his reasons for staying.

Two Chechen mercenaries fighting alongside the Abkhaz separatists show up and demand food from Ivo before leaving peacefully. However, they get into a firefight with Georgian soldiers in front of Margus' house, leaving only one alive from each side. Ahmed (Giorgi Nakashidze), the surviving Chechen, and Nika (Mikheil Meskhi), a Georgian volunteer, are both gravely wounded, and Ivo brings them into his home to nurse them back to health.

While both vow to kill each other once they have the strength, Ivo secures a pledge from each to not enact any vengeance under his roof. A great deal of tension ensues between the two enemies as they begin to recover over many days in the same tiny house. Slowly, the two begin to recognize the humanity and honor in each other. Under the moral tutelage of the senior and wise Ivo, the two move from hatred and antagonism, to respect and camaraderie.

When Abkhaz soldiers come to the house, Ivo convinces Ahmed to tell them that Nika is also a fellow Chechen, but whose head wound has left him unable to speak.

After a local military fails to show to harvest the tangerines, Margus is desperate. The Abkhaz soldiers, having set up camp nearby, promise to help harvest the tangerines in two days. That night, however, shelling hits the village, destroying Margus' property. Ahmed offers Margus a large wad of cash that he has made from being a mercenary, but Margus refuses money "made like that".

Russian Ground Forces troops allied to the Abkhaz and Chechens later drive up to Ivo's house, finding Ahmed and Margus outside, and falsely accuse Ahmed of being Georgian. They are about to execute him when Nika shoots them from the house with a rifle. In the firefight Margus is killed by Russian gunfire. Ahmed and Nika partner to fight the Russians, but Nika is shot dead by a wounded Russian before Ahmed finishes off Nika's killer.

Ivo and Ahmed bury Margus and Nika. Ivo reveals that Nika's body lies next to that of his own son, who was killed when the war broke out in August 1992. Ivo tells Ahmed that if he had died instead of Nika, Ivo would have buried Ahmed next to his son as well. Ahmed tells Ivo that he misses his own family, and begins his drive home to a Chechnya that will be plunged into a similar bloody war less than two years later. He listens to a cassette tape of Georgian music that belonged to Nika.

The film received an 88% rating from review aggregator Rotten Tomatoes based on 66 reviews, with an average rating of 7.40/10. The site's critical consensus reads, "Tangerines' impassioned message and the strong work of a solid cast more than make up for the movie's flawed narrative and uneven structure." [8] On Metacritic, the film has a weighted average score of 73 out of 100 based on 18 critics, indicating "generally favorable reviews". [9]

According to the film critic Anthony D'Alessandro, Nüganen drew a parallel to the 2014 Ukraine-Russia Conflict. [10]

Shamil Salmanovich Basayev was a senior leader of the Chechen movement and Islamic terrorist. 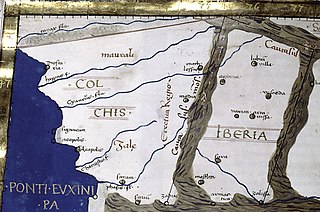 Abkhazians, or Abkhaz, are a Northwest Caucasian ethnic group, mainly living in Abkhazia, a disputed region on the northeastern coast of the Black Sea. A large Abkhaz diaspora population resides in Turkey, the origins of which lie in the population movements from the Caucasus in the late 19th century. Many Abkhaz also live in other parts of the former Soviet Union, particularly in Russia and Ukraine.

Irakli Alasania is a Georgian politician, soldier and former diplomat who served as the Minister of Defense of Georgia from 2012 to 2014. He was Georgia's Ambassador to the United Nations from September 11, 2006, until December 4, 2008. His previous assignments include Chairman of the Government of Abkhazia(-in-exile) and the President of Georgia's aide in the Georgian-Abkhaz talks. Soon after his resignation, Alasania withdrew into opposition to the Mikheil Saakashvili administration, setting up the Our Georgia – Free Democrats party in July 2009. In 2012 Alasania was appointed Minister of Defense, a position he held until 2014. 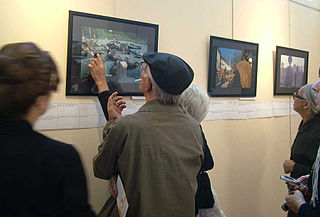 The ethnic cleansing of Georgians in Abkhazia, also known as the massacres of Georgians in Abkhazia and genocide of Georgians in Abkhazia — refers to the ethnic cleansing, massacres and forced mass expulsion of thousands of ethnic Georgians living in Abkhazia during the Georgian-Abkhaz conflict of 1992–1993 and 1998 at the hands of Abkhaz separatists and their allies. Armenians, Greeks, Russians and opposing Abkhazians were also killed. Roughly 200,000 to 250,000 Georgian civilians became Internally displaced persons (IDPs). The ethnic cleansing and massacres of Georgians has been officially recognized by the Organization for Security and Co-operation in Europe (OSCE) conventions in 1994, 1996 and again in 1997 during the Budapest, Lisbon and Istanbul summits and condemned the "perpetrators of war crimes committed during the conflict." On May 15, 2008, the United Nations General Assembly adopted a resolution A/RES/62/249 in which it "Emphasizes the importance of preserving the property rights of refugees and internally displaced persons from Abkhazia, Georgia, including victims of reported "ethnic cleansing", and calls upon all Member States to deter persons under their jurisdiction from obtaining property within the territory of Abkhazia, Georgia in violation of the rights of returnees". The UN Security Council passed a series of resolutions in which it appealed for a cease-fire.

The Sukhumi massacre took place on September 27, 1993, during and after the fall of Sukhumi into separatist hands in the course of the War in Abkhazia. It was perpetrated against Georgian civilians of Sukhumi, mainly by militia forces of Abkhaz separatists, their North Caucasian and Russian allies. It became part of a violent ethnic cleansing campaign carried out by the separatists.

The Bagramyan Battalion was a battalion formed in Abkhazia and predominantly composed of ethnic Armenians living in Abkhazia that fought together with Russia backed separatist Abkhaz forces during the War in Abkhazia (1992–93). Named in honour of the Soviet Armenian Marshal Ivan Bagramyan, the battalion fought against the forces of Georgia. It was subsequently disbanded. 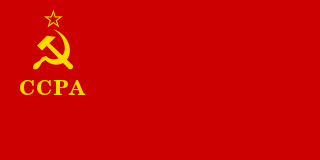 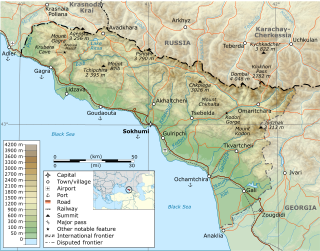 The War in Abkhazia was fought between Georgian government forces for the most part and Abkhaz separatist forces, Russian government armed forces and North Caucasian militants between 1992 and 1993. Ethnic Georgians who lived in Abkhazia fought largely on the side of Georgian government forces. Ethnic Armenians and Russians within Abkhazia's population largely supported the Abkhazians and many fought on their side. The separatists received support from thousands of North Caucasus and Cossack militants and from the Russian Federation forces stationed in and near Abkhazia.

The Battle of Gagra was fought between Georgian forces and the Abkhaz secessionists aided by the Confederation of Mountain Peoples of the Caucasus (CMPC) militants from 1 to 6 October 1992, during the War in Abkhazia. The allies, commanded by the Chechen warlord Shamil Basayev, captured the town of Gagra from the undermanned Georgian forces in a surprise attack, leading to an outbreak of ethnic cleansing of local Georgian population. The battle proved to be one of the bloodiest in the war and is widely considered to be a turning point in the Georgian-Abkhaz conflict. The action, in which Russian commanders were suspected to have aided to the attackers, also resulted in a significant deterioration of the Georgian-Russian relations.

The Abkhazian Armed Forces are the military forces of Abkhazia. 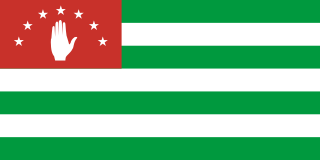 Abkhazia is a de facto state in the South Caucasus recognised by most countries as part of Georgia, which views the region as an autonomous republic. It lies on the eastern coast of the Black Sea, south of the Greater Caucasus mountains in northwestern Georgia. It covers 8,660 square kilometres (3,340 sq mi) and has a population of around 245,000. Its capital is Sukhumi. 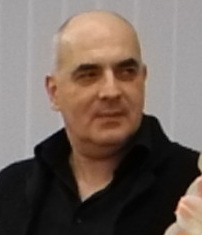 Abkhaz neopaganism, or the Abkhaz native religion, is the contemporary re-emergence of the ethnic religion of the Abkhaz people in unrecognized Abkhazia, a revitalisation which started in the 1980s. The most important holy sites of the religion are the Seven Shrines of Abkhazia, each one having its own priestly clan, where rituals and prayers began to be restored in the 1990s.

Giorgi Nakashidze is a Georgian film, Television and stage actor.

Elmo Nüganen is an Estonian theatre director, film director and actor. He has been the artistic director of the Tallinn City Theatre since 1992. He was a graduate of the Estonian Academy of Music and Theatre in 1988 and then a professor at the academy in 1998-2002 and 2008-2012. He directed the war films Names in Marble from 2002 and 1944 from 2015. Names in Marble was seen by more than 168.000 people in Estony and was selected for the 2003 Taormina Film Fest, while 1944 had the highest opening-week audience numbers in Estonian film history and became the country's submission for the Academy Awards.