Tango no Sekku (端午の節句), also known as Ayame no hi (Iris festival), is one of the five annual ceremonies that were traditionally held at the Japanese imperial court called Gosekku. It is the Japanese equivalent of Double Fifth and was celebrated on the fifth day of the fifth moon in the lunar calendar or Chinese calendar. After Japan switched to the Gregorian calendar, the date was moved to May 5. [1] Other festivals are celebrated on the same day in mainland China, Hong Kong, Macau, and Taiwan as the Duanwu Festival or Tuen Ng Festival (Cantonese), in Korea as the Dano Festival, and Vietnam as the Tết Đoan Ngọ on the traditional lunar calendar date.

Tan (端) means "beginning" and go ( 午 ) is a simplified form of ⾺ (horse), referring to the Chinese zodiac name for the fifth lunar month. Days of the week also have zodiac animals. Thus, tango originally meant "the first horse day of the fifth month". However, go is a homonym for 五 (five) in Japanese, so during the Nara period the meaning shifted to become the fifth day of the fifth month. [2] Sekku means a seasonal festival. There are five sekku, including O-Shogatsu (January 1), Hina Matsuri (March 3), Tanabata (July 7) and Kiku Matsuri (September 9) along with Tango. Tango no Sekku marks the beginning of summer or the rainy season.

Although it is not known precisely when this day started to be celebrated, it was probably during the reign of the Empress Suiko (593–628 A.D.). In Japan, Tango no Sekku was assigned to the fifth day of the fifth month after the Nara period.

Until recently, Tango no Sekku was known as Boys' Day (also known as Feast of Banners) while Girls' Day ( Hinamatsuri ) was celebrated on March 3. In 1948, the government decreed this day to be a national holiday to celebrate the happiness of all children and to express gratitude toward mothers. It was renamed Kodomo no Hi (Children's Day) and changed to include both boys and girls.

Before this day, families raise the carp-shaped koinobori flags (carp because of the Chinese legend that a carp that swims upstream becomes a dragon, and the way the flags blow in the wind looks like they are swimming), one for each boy (or child), display a Kintarō doll usually riding on a large carp, and the traditional Japanese military helmet, kabuto . Kintarō and the kabuto are symbols of a strong and healthy boy.

Kintarō (金太郎) is the childhood name of Sakata no Kintoki who was a hero in the Heian period, a subordinate samurai of Minamoto no Raikou, having been famous for his strength when he was a child. It is said that Kintarō rode a bear, instead of a horse, and played with animals in the mountains when he was a young boy. 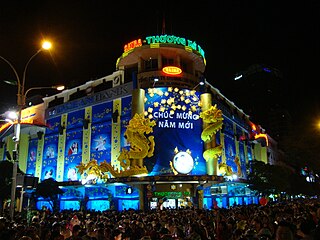 Tết, short for Tết Nguyên Đán , Spring Festival,Lunar New Year, orVietnamese Lunar New Year is the most important celebration in Vietnamese culture. The colloquial term "Tết" is a shortened form of Tết Nguyên Đán, with Sino-Vietnamese origins meaning "Festival of the First Morning of the First Day". Tết celebrates the arrival of spring based on the Vietnamese calendar, which usually has the date falling in January or February in the Gregorian calendar.

Japanese festivals are traditional festive occasions. Some festivals have their roots in Chinese festivals centuries ago, but have undergone great changes as they mixed with local customs.

Hinamatsuri (雛祭り), also called Doll's Day or Girls' Day, is a religious holiday in Japan, celebrated on 3 March of each year. Platforms covered with a red carpet-material are used to display a set of ornamental dolls representing the Emperor, Empress, attendants, and musicians in traditional court dress of the Heian period.

The Double Ninth Festival, observed on the ninth day of the ninth month in the Chinese calendar, is a traditional Chinese holiday, mentioned in writings since before the Eastern Han period.

Lunar New Year is the beginning of a calendar year whose months are moon cycles, based on the lunar calendar or lunisolar calendar.

Koinobori (鯉のぼり), meaning "carp streamer" in Japanese, are carp-shaped windsocks traditionally flown in Japan to celebrate Tango no sekku (端午の節句), a traditional calendrical event which is now designated a national holiday: Children's Day. These windsocks are made by drawing carp patterns on paper, cloth or other nonwoven fabric. They are then allowed to flutter in the wind. They are also known as satsuki-nobori (皐のぼり).

Jinjitsu is one of the five seasonal festivals that were integrated into the Japanese Imperial calendar over 1,000 years ago. Sekku is the term given meaning special day of observance. The festival is now celebrated on the seventh day of the first month and is considered a part of the New Year observances that are celebrated during this time.

Kintaro may refer to:

Renri is the 7th day of Zhengyue, the first month in the traditional Chinese calendar). According to Chinese customs, Renri was the day human beings were created. It is celebrated not only in China, but also in the surrounding region influenced by Chinese culture.

Tết Đoan Ngọ is the Vietnamese version of Chinese Duanwu festival (literally: Tết: festival, Đoan: the start/straight/middle/righteousness/just, Ngọ: at noon. Đoan Ngọ is the moment that the sun is the most near the earth and this day often is "The middle day of summer". In Vietnam, this day is also the death anniversary of National Mother Âu Cơ. Tết Đoan Ngọ marks the start of farming season in Vietnam. In the past, people start getting rid of insects, worms that harm their crops on this day. In historical times, Vietnamese also ate alcoholic fermented glutinous rice and other sweet treats on this day with hope that these foods will "kill" the bad "worms" inside the bodies to be healthy, hence the name, why Tết Đoan Ngọ is also called "Worm Killing Festival".

Kashiwa mochi is a wagashi of white mochi surrounding a sweet anko filling with a Kashiwa leaf wrapped around it. Unlike the cherry blossom leaf used in sakura mochi, the oak (kashiwa) leaf used in kashiwa mochi is not eaten and used only to symbolize the prosperity of one's descendants.

The Gosekku (五節句), also known as sekku (節句), are the five annual ceremonies that were traditionally held at the Japanese imperial court. The origins were Japanese practices merged with Chinese practices and celebrated in Japan since the Nara period in the 8th century CE. The Japanese culture and tradition incorporated this in a unique way that spread throughout the country. The festivals were held until the beginning of the Meiji era. Some of them are still celebrated by the public today.