Tangwang County (Chinese :汤旺县; pinyin :Tāngwàng Xiàn) is a county in Heilongjiang Province, China. It is under the administration of the prefecture-level city of Yichun. The county was established by merging the former Wuyiling District and Tangwanghe District approved by Chinese State Council in 2019. The county seat is Henan Subdistrict (河南街道). [1]

Shanghai is one of the four municipalities under the direct administration of the central government of the People's Republic of China. It is the most populous urban area in China, and the second most populous city proper in the world. Shanghai is a global financial, innovation and technology, and transport hub, with the world's busiest container port. Located in the Yangtze River Delta, it sits on the south edge of the estuary of the Yangtze in the middle portion of the Eastern China coast. The municipality borders the provinces of Jiangsu and Zhejiang to the south, east and west, and is bound to the east by the East China Sea. 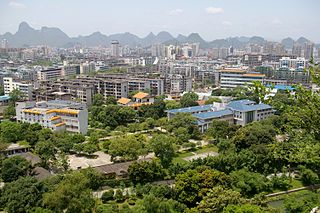 Guilin,, is a prefecture-level city in the northeast of China's Guangxi Zhuang Autonomous Region. It is situated on the west bank of the Li River and borders Hunan to the north. Its name means "Forest of Sweet Osmanthus", owing to the large number of fragrant sweet osmanthus trees located in the region. The city has long been renowned for its scenery of karst topography.

Wuxi is a city in southern Jiangsu province, eastern China, 135 kilometres (84 mi) by road northwest of the centre of Shanghai, between Changzhou and Suzhou. In 2017 it had a population of 3,542,319, with 6,553,000 living in the entire prefecture-level city area.

The Santa language, also known as Dongxiang, is a Mongolic language spoken by the Dongxiang people in Northwest China.

Sinshih District, alternatively spelled Xinshi, is a rural district in central Tainan, Taiwan, about 11 km north of Fort Provintia. As Sincan, it was one of the most important stations of the Dutch East India Company (VOC) in the 17th century. Missionary work formally began and the largest amount of inland trade occurred at Sinkan.

Putian is a prefecture-level city in eastern Fujian province, China. It borders Fuzhou City to the north, Quanzhou City to the south, and the Taiwan Strait's Xinghai Bay to the east. The Mulan River flows through the southern part of the city. It's built-up area made of 4 urban districts was home to 1,953,801 inhabitants as of 2010 census. The native language of the area is Pu-Xian Min.

Shiyan is a prefecture-level city in northwestern Hubei province, China, bordering Henan to the northeast, Chongqing to the southwest, and Shaanxi to the north and west. At the 2010 census, its population was 3,340,841 of whom 767,920 lived in the built-up urban districts of Maojian and Zhangwan on 1,193 square kilometres. In 2007, the city was named China's top ten livable cities by Chinese Cities Brand Value Report, which was released at 2007 Beijing Summit of China Cities Forum. 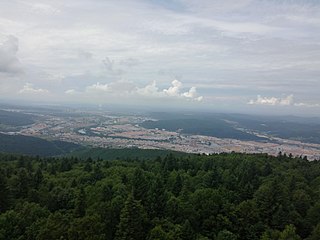 The Wutun language is a Chinese–Tibetan–Mongolian creolized language. It is spoken by about 2,000 people, most of whom are classified as Monguor (Tu) by the Chinese government. Wutun speakers reside in two villages of Tongren County, eastern Qinghai province, China. It is also known as the Ngandehua language.

Syuejia District, alternatively spelled Xuejia, is a district of about 26,621 residents in Tainan City, Taiwan.

Nancha is a county in Heilongjiang Province, China. It is under the administration of the prefecture-level city of Yichun. The county was re-organized from the former Nancha District (南岔区) by Chinese State Council in 2019. The county seat is Lianhe Subdistrict (联合街道).

The Tangwang language is a variety of Mandarin Chinese heavily influenced by the Mongolic Santa language (Dongxiang). It is spoken in a dozen or so villages in Dongxiang Autonomous County, Gansu Province, China. The linguist Mei W. Lee-Smith calls this creole language the "Tangwang language", based on the names of the two largest villages where it is spoken. 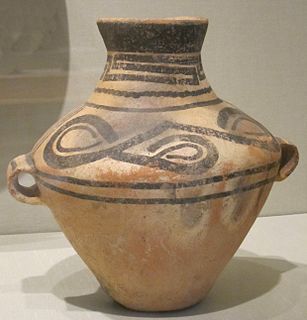 Xindian culture was a Bronze Age culture in the Gansu and Qinghai provinces of China. Xindian culture is dated ca. 1500–1000 BCE, a radiocarbon testing of an artefact produced a date around 1000 BCE, which roughly corresponds to the Western Zhou period of the Central Plain area.

Ŏryong Station is a railway station in Kujang county, North P'yŏngan province, North Korea on the Manp'o Line of the Korean State Railway; it is also the starting point of the Ryongmun Colliery Line to Ryongmun T'an'gwang.

Fenglin County is a county in Heilongjiang Province, China. It is under the administration of the prefecture-level city of Yichun. The county was established by merging the former Xinqing District, Wuying District and Hongxing District approved by Chinese State Council in 2019. The county seat is Xinqing Subdistrict (新青街道).