Umbai is a mukim in Jasin District, Melaka, Malaysia. Many residents had moved out from the town because there are no development here for a long time. Residenzstraße is a Berlin U-Bahn station located on the U 8. Opened in 1987 (Rümmler) this station was designed to resemble a palace, the Berliner Stadtschloss. With ornaments on the floor, pompous columns, mirrors and golden capitals this was accomplished. The motifs on the walls show plans of Berlin, the old Stadtschloss and parts of Berlin.

Candidplatz is an U-Bahn station in Munich on the U1 line of the Munich U-Bahn system. The station is named for the Flemish mannerist painter Peter Candid, who entered employ in Munich in 1586, producing notable artworks for the Munich Residenz. The station is notable for the decorative scheme applied to the outer walls, which evoke a rainbow. 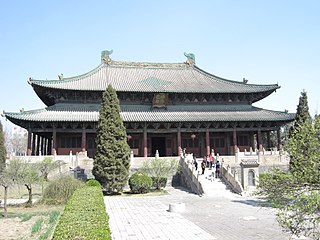 Quyang County is under the administration of Baoding City, Hebei province, China. The county is famous for its stone carvings, many of which are exported abroad. The Beiyue Temple is located in Quyang city.

Qayadalı is a village in the Quba Rayon of Azerbaijan. The village forms part of the municipality of Yerfi.

Houcksville is an unincorporated community in Carroll County, Maryland, United States. The Isaac Hoffman House was listed on the National Register of Historic Places in 1985.

Miličín is a village in Benešov District, the Czech Republic.

Svojšice is a village and municipality in Příbram District in the Central Bohemian Region of the Czech Republic.

Wangcang County is a county in the northeast of Sichuan Province, China, bordering Shaanxi province to the north. It is under the administration of Guangyuan city.

Xianghe County is a county of central Hebei province. It is under the administration of Langfang prefecture-level city. Xianghe has 7 towns and 2 townships. It is 45 kilometres (28 mi) southeast of Beijing.

Guangyang District is a district of Langfang, Hebei, China.

Qinghe District, previously named as Qinghe Township before the 1980s, is a district of Tieling City 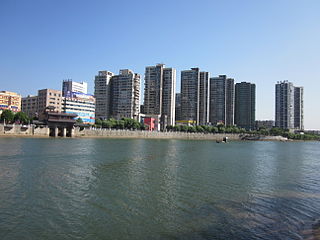 The Wei or Weishui River, begins in Weishan Township, is 117.2 kilometres (72.8 mi) long, and has a drainage basin of 2,125 square kilometres (820 sq mi). It is the largest river in Ningxiang City and one of the largest tributaries of the Xiang River.

Kerriston is an extinct town in King County, in the U.S. state of Washington. The GNIS classifies it as a populated place.

Woken River, is a river in the Chinese province of Heilongjiang.

Tangwang County is a county in Heilongjiang Province, China. It is under the administration of the prefecture-level city of Yichun. The county was established by merging the former Wuyiling District and Tangwanghe District approved by Chinese State Council in 2019. The county seat is Henan Subdistrict (河南街道).