The Tarakai or Taraki (Pashto : تره کي‎) is a khilji [1] Pashtun tribe; manly found in the Ghazni province of Afghanistan, their traditional power base. They are divided into six clans: Lilizai, Mul, Gurbuz, Badin, Saki, and Murekkhel. [2]

The Tarakai were one of the Pashtun tribes resettled under the rule of king Abdur Rahman Khan in the late 19th century. [3]

Nur Muhammad Taraki was an Afghan communist statesman during the Cold War who served as President of Afghanistan from 1978 to 1979. Taraki was born in Nawa, Ghazni Province and graduated from Kabul University, after which he started his political career as a journalist. He later became one of the founding members of the People's Democratic Party of Afghanistan (PDPA) and was elected as the party's general secretary at its first congress. He ran as a candidate in the 1965 Afghan parliamentary election but failed to win a seat. In 1966 he published the first issue of Khalq, a party newspaper, but the government closed it down shortly afterward. Taraki led the Khalq wing of the PDPA. In 1978 he, Hafizullah Amin and Babrak Karmal initiated the Saur Revolution and established the Democratic Republic of Afghanistan.

Achakzai, pronounced in Pashto, is a Pashtun tribe that resides on both sides of the Durand Line, centered on Killa Abdullah District in Pakistan with some clans as far away as Afghanistan's Kandahar Province.

Gelan is a district in the south of Ghazni Province, Afghanistan. Its population, which is 100% Pashtun, was estimated at 78,408 in 2002. The district capital is Janda.

Pur Chaman is a mountainous district in Farah Province, Afghanistan. Its population is approximately 95% Tajik with a Pashtun minority. The main village, also called Purchaman 33°8′29″N63°51′41″E is situated at 1431 m altitude.

Taraki may refer to:

Janda is a village and the district center of Gelan District, Ghazni Province, Afghanistan. It is situated in the central part of the district at 32.7269°N 67.6369°E at 1,983 m altitude. The houses are made of mud bricks and the streets are unpaved.

Nawa is located on 32.3215°N 67.887°E at 2,007 m altitude in the central part of Nawa District, Afghanistan. The town is located within the heartland of the Tarakai tribe of Ghilji Pashtuns. 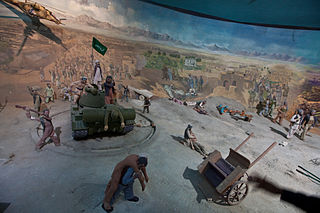