Tarcento (Friulian : Tarcint) is a small city, having become a city officially when the church was given back its rank of Duomo, cathedral, and comune (municipality) in the province of Udine, in the Friuli-Venezia Giulia region of north-eastern Italy.

Tarcento occupies a strategic location at a bridging point on the River Torre. Archaeological finds indicate a very early date for its first human occupation. Tarcento first appears in the historical record around the year 1126 CE, when an Austrian nobleman, Machland, from Perg, was feudal overlord of the castle around which the town had developed. Subsequently, a second castle was built on the hill of Coia.

In 1219 the Caporiacco family took over as feudal overlords. Both castles were badly damaged during wars for control of the area between the Holy Roman Empire and the Republic of Venice in the Middle Ages, and in 1420 CE Tarcento became part of the territory controlled by the Venetian Republic.

The main castle was burnt down in a peasant's uprising and then damaged by a serious earthquake, both in 1511 CE. Nothing remains of that castle today. A corner of the tower of the castle on the hill of Coia can still be seen.

Following the Napoleonic conquest of the Venetian Republic in 1797, Tarcento came under Austrian Rule. In 1866 Tarcento became part of the Kingdom of Italy.

During World War I, Tarcento was close to the front line on the eastern front. After the Italian rout at the Battle of Caporetto in 1917, Tarcento was occupied by the Austrians until the end of the war.

A catastrophic earthquake in 1976 caused a great deal of damage in the town and its surroundings, all of which has subsequently been repaired.

Veneto or Venetia is one of the 20 regions of Italy. Its population is about five million, ranking fifth in Italy. The region's capital is Venice. 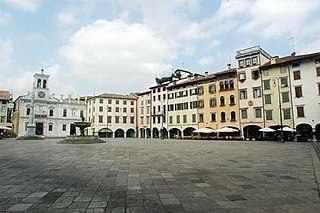 Thiene is a city and comune in the province of Vicenza, in northern Italy, located approximately 75 kilometres (47 mi) west of Venice and 200 kilometres (120 mi) east of Milan. The city has an active and lively industrial sector, composed mainly of small to medium-sized companies.

Salò is a town and comune in the Province of Brescia in the region of Lombardy on the banks of Lake Garda, on which it has the longest promenade. The city was the seat of government of the Italian Social Republic from 1943 to 1945, with the ISR often being referred to as the "Salò Republic". 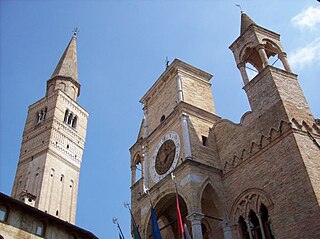 Mola di Bari, commonly referred to simply as Mola, is a town and comune of the Metropolitan City of Bari, in the region of Apulia, in Southern Italy, on the Adriatic Sea. 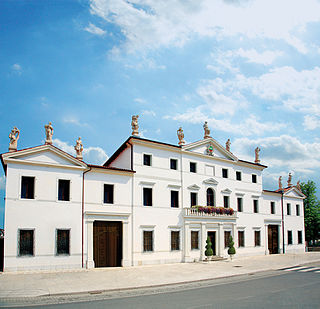 Aviano is a town and comune in the province of Pordenone at the foot of the Dolomites mountain range in Friuli-Venezia Giulia, northern Italy.

Melfi is a town and comune in the Vulture area of the province of Potenza, in the Southern Italian region of Basilicata. In 2015 it had a population of 17,768.

Crema is a city and comune in the province of Cremona, in the region of Lombardy in northern Italy. It is built along the river Serio at 43 kilometres (27 mi) from Cremona. It is also the seat of the Catholic Bishop of Crema, who gave the title of city to Crema.

Sacile is a town and comune in the province of Pordenone, in the Friuli-Venezia Giulia region of northeastern Italy. It is known as the "Garden of the Serenissima" after the many palaces that were constructed along the river Livenza for the nobility of the Most Serene Republic of Venice.

Potenza is a city and comune in the Southern Italian region of Basilicata.

Portogruaro is a town and comune in the Metropolitan City of Venice, Veneto, northern Italy. The city is the centre of a district, made up of 11 comuni, which form the Venezia Orientale with the San Donà di Piave district.

San Giovanni Teatino is a comune and town in the Province of Chieti in the Abruzzo region of Italy. Until 1894 this comune was known as Forcabobolina. Situated on a hill overlooking the valley of the river Pescara (Aterno-Pescara), in recent years the place has undergone an industrial development, especially in the area of Sambuceto. Abruzzo Airport is also located in a portion of the municipal territory, close to the border with Pescara. In fact, the municipality is virtually divided into two, San Giovanni Teatino (Alto), which is the historic village on the hill, and the aforementioned Sambuceto, an ever-growing urban settlement, home to a large shopping area and an important industrialized area.<> 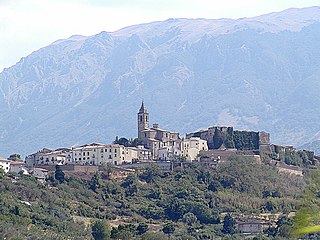 Tocco da Casauria is a comune and town in the Province of Pescara in the Abruzzo region of Central Italy.

Calvene is a town in the province of Vicenza, Veneto, Italy. It is east of SP349.

Mussolente is a town in the province of Vicenza, Veneto, northern Italy. It is north of SS248 state road. 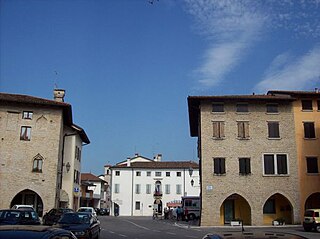 Valvasone Arzene is a comune (municipality) in the Province of Pordenone in the Italian region Friuli-Venezia Giulia, located about 80 kilometres (50 mi) northwest of Trieste and about 15 kilometres (9 mi) east of Pordenone. It was formed on 1 January 2015 after the merger of the previous comuni of Valvasone and Arzene.