Last updated May 04, 2021
Pashtun tribe in Afghanistan and Pakistan

The Tareen (or Tarin) (Pashto : ترین‎) is a Pashtun tribe inhabiting southern Afghanistan, and western region of Pakistan. [1] [2]

Much of the tribe continues to live in their native lands in the southern parts of Afghanistan and Pishin in Baluchistan, Pakistan. [3] During the reign of the Mughal emperor Shah Jahan (1628 to 1658) a group of Tareen/Tarin emigrated to the area which is now the Hazara area of Khyber Pakhtunkhwa province of Pakistan. [3] [4] The Tareen Chiefs resisted the Sikh occupation of Hazara region which resulted in their properties/ land being usurped by Sikh armies. [4] [5]

According to Ni'mat Allah al-Harawi in History of the Afghans, Tareen had three sons namely: Tor, Spin (Aspin or Speen) and Awdal/Born Tareen/Abdali. Their descendants today have adopted the names above as tribal identities and are known as Tor Tareen, Spin Tareen and Bor Tareen. These three major clans are further divided into smaller unit. [6] [7]

The principal languages of Tareen are Tareeno and Pashto and Urdu Punjabi in Pakistan.

Tareens primarily live in Pishin, [8] Dukki, Loralai, Quetta, Mastung, and Harnai districts of Balochistan, while smaller populations are spread all over the province.

In Khyber Pukhtunkhwa, the tribe has 'Tareen Vand' in Mardan. [9] In Haripur, a number of Tareen families claim to have settled there since 1600s, after migrating mainly from Pishin and Kandahar. Field Marshal Muhammad Ayub Khan who served a long tenure as the President of Pakistan was a Tareen from Rehana in Haripur. [3]

Haripur District is a district in Hazara Division of Khyber Pakhtunkhwa province in Pakistan. The town of Haripur was founded in 1822 by Hari Singh Nalwa, the Commander-in-Chief of Ranjit Singh's army. Before becoming a district in 1991, Haripur had the status of a tehsil in Abbottabad District. Its headquarters is the city of Haripur.

Haripur is the main city of the Haripur District in Hazara, Khyber Pukhtunkhwa in Pakistan, with Swabi and Buner to the west, some65 km (40 mi) north of Islamabad and 35 km Khanpur Road Tofkian Valley Taxila and 35 km (22 mi) south of Abbottabad. It is in a hilly plain area at an altitude of 520 m (1,706 ft).

Khan Sardar Bahadur Khan was a Pakistani politician. He was the 9th Chief Minister of the Khyber-Pakhtunkhwa. 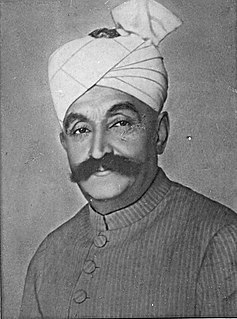 Talokar is a village in the Haripur area of Hazara, Khyber Pakhtunkhwa in Pakistan.

Risaldar-Major Mir Dad Khan, OBI, was from the Tareen tribe in Hazara region of the North West Frontier Province. He was a Risaldar Major in the British Indian Army. He was the father of former Pakistani president Ayub Khan and the Muslim League stalwart Sardar Bahadur Khan

Bostan Khan, was a warrior of the Tareen tribe settled in the Haripur, Hazara region of what was to later become the North-West Frontier Province, who was executed for rebellion by the Sikh administrators of the region at that time.

Yousuf Ayub Khan is a Pakistani politician and businessman. He is a grandson of former military dictator and president Ayub Khan..

Muhammad Habib Khan Tarin, Risaldar-Bahadur, CSI, was a cavalry officer of Tarin descent, who lived in the Hazara region on the Punjab Frontier, in British India.