Tatler is a British magazine published by Condé Nast Publications focusing on fashion and lifestyle, as well as coverage of high society and politics. It is targeted towards the British upper-middle class and upper class, and those interested in society events. Its readership is the wealthiest of all Condé Nast's publications [source needed]. It was founded in 1901 by Clement Shorter. Tatler is also published in Russia by Conde Nast, and by Edipresse Media Asia. [2]

Tatler was introduced on 3 July 1901, by Clement Shorter, publisher of The Sphere . It was named after the original literary and society journal founded by Richard Steele in 1709. For some time a weekly publication, it had a subtitle varying on "an illustrated journal of society and the drama". It contained news and pictures of high society balls, charity events, race meetings, shooting parties, fashion and gossip, with cartoons by "The Tout" and H. M. Bateman.

In 1940, the magazine absorbed The Bystander , creating a publication called The Tatler and Bystander. [3] In 1961, Illustrated Newspapers, which published Tatler, The Sphere, and The Illustrated London News , was bought by Roy Thomson. [4] In 1965, Tatler was retitled London Life. [5] [6] In 1968, it was bought by Guy Wayte's Illustrated County Magazine group and the Tatler name restored. [7] Wayte's group had a number of county magazines in the style of Tatler, each of which mixed the same syndicated content with county-specific local content. [7] Wayte, "a moustachioed playboy of a conman" [8] was convicted of fraud in 1980 for inflating Tatler's circulation figures from 15,000 to 49,000. [9]

The magazine was sold and relaunched as a monthly magazine in 1977, called Tatler & Bystander until 1982. [6] Tina Brown (editor 1979–83), created a vibrant and youthful Tatler and is credited with putting the edge, the irony and the wit back into what was then an almost moribund social title. She referred to it as an upper-class comic and by increasing its influence and circulation made it an interesting enough operation for the then owner, Gary Bogard, to sell to publishers Condé Nast. Brown subsequently transferred to New York, to another Condé Nast title, Vanity Fair .

After several later editors and a looming recession, the magazine was once again ailing; Jane Procter was brought in to re-invent the title for the 1990s. The circulation rose to over 90,000, a figure which was exceeded five years later by Geordie Greig. The magazine created various supplements including the Travel and Restaurant Guides, the often-referred to and closely watched Most Invited and Little Black Book lists, as well as various parties.

Kate Reardon became editor in 2011. She was previously a fashion assistant on American Vogue and then, aged 21, became the youngest-ever fashion director of Tatler. [10] Under Reardon's directorship Tatler retained its position as having the wealthiest audience of Condé Nast's magazines, exceeding an average of $175,000 in 2013. [11]

Reardon left the title at the end of 2017. The appointment of Richard Dennen as the new editor was announced at the beginning of February 2018, and he took up the post on 12 February. [12]

One of Tatler's most talked-about annual features is the Little Black Book. The supplement is a compilation of "the most eligible, most beddable, most exotically plumaged birds and blokes in town", and individuals previously featured have included those from a number of backgrounds: aristocrats and investment bankers sit alongside celebrities and those working in the media sector.

Past and present editors

Sophie Dahl is an English author and former fashion model. Her first novel was published in 2003, The Man with the Dancing Eyes, followed by Playing With the Grown-ups in 2007. In 2009, she wrote Miss Dahl's Voluptuous Delights, a cookery book with recipes that were recreated for a six-part BBC 2 series, The Delicious Miss Dahl. In 2011, her cookery book, From Season to Season was published, and her first children's book, Madame Badobedah, was published in 2019. She is the granddaughter of author Roald Dahl.

Vogue is an American monthly fashion and lifestyle magazine that covers many topics, including fashion, beauty, culture, living, and runway. Based in New York City, it began as a weekly newspaper in 1892 before becoming a monthly magazine years later. Since starting up in 1892, Vogue has featured numerous actors, actresses, musicians, models, gymnasts, etc. The largest issue to be published by Vogue magazine was published in September 2012, containing 900 pages.

GQ is an American international monthly men's magazine based in New York City and founded in 1931. The publication focuses on fashion, style, and culture for men, though articles on food, movies, fitness, sex, music, travel, sports, technology, and books are also featured.

Gourmet magazine was a monthly publication of Condé Nast and the first U.S. magazine devoted to food and wine. The New York Times noted that "Gourmet was to food what Vogue is to fashion." Founded by Earle R. MacAusland (1890–1980), Gourmet, first published in January 1941, also covered "good living" on a wider scale, and grew to incorporate culture, travel, and politics into its food coverage. James Oseland, an author and editor in chief of rival food magazine Saveur, called Gourmet “an American cultural icon.”

Veronica Judith Colleton Wadley, Baroness Fleet, is the chairman of Arts Council London and board member of Arts Council England (2010–present). She was a senior advisor to the former Mayor of London, Boris Johnson (2012–2016) and the chairman of the London Music Fund from 2012 to 2016, where she remains a Trustee. She is also a non-executive director of the Berkeley Group and an independent Director of Times Newspapers Holdings.

House & Garden is an American shelter magazine published by Condé Nast Publications that focusses on interior design, entertaining, and gardening.

George Carron Greig, known as Geordie Greig, is an English journalist and former editor of the Daily Mail. He was editor in 2020 when it surpassed The Sun to become the best-selling newspaper in the UK.

Alexandra Shulman is a British journalist. She is a former Editor-in-Chief of British Vogue, and became the longest serving Editor in the history of the publication. After assuming the role in 1992, she presided over a circulation increase to 200,000. Shulman is reputedly one of the country's most oft-quoted voices on fashion trends. In addition to her work with Vogue, Shulman has written columns for The Daily Telegraph and the Daily Mail, as well as a novel. 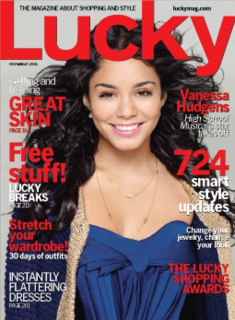 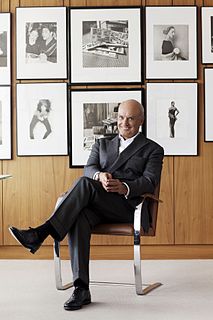 Nicholas David Coleridge is Chairman of the Victoria and Albert Museum, Chairman of the Prince of Wales' Campaign for Wool, Chairman of the Gilbert Trust for the Arts and Co-chair of The Queen’s Platinum Jubilee Pageant. He is an ambassador for the Landmark Trust and a patron of the Elephant Family.

Charles Mark Edward Boxer was a British magazine editor and social observer, and a political cartoonist and graphic portrait artist working under the pen-name ‘Marc’. 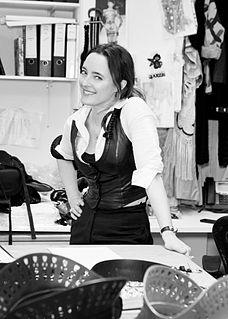 Alice Temperley MBE is an English fashion designer based in Ilminster, Somerset, England. Her fashion label, Temperley London was launched in 2000.

Kate Reardon is a British journalist and author who was the editor of Tatler magazine from 2011 until resigning in December 2017.

Caroline Kellett, usually known just as Kellett, was a British journalist who was fashion editor of Tatler and held a number of other positions in British fashion journalism.

Georgina Hogg, known as Min Hogg, was a British journalist, magazine editor, and interior designer. She was the daughter of Sir James Cecil Hogg K.C.V.O., an ear specialist whose patients included Queen Elizabeth II. She was the fashion editor of Harper's & Queen between 1974 and 1979, and then co-founded the World of Interiors in 1981, which became one of the most influential shelter magazines of the late 20th century. She died in June 2019.

Richard Dennen is a British journalist and editor of Tatler. He is best known for his contributions to the fashion industry. He previously contributed to publications including The Sunday Times, The London Evening Standard, and The Mail on Sunday.