Negron was born in Glendale, California, [2] the son of Puerto Rican couple Lucy (née Rosario) and Conrad Negron, Sr. [3] His cousin is singer and musician Chuck Negron, of Three Dog Night fame. [4] He grew up in La Cañada Flintridge, California, [2] and graduated from the University of California Los Angeles. [5]

While still in high school, Negron's career in comedy began with a stand-up performance at the Comedy Store in Los Angeles. After this appearance, Negron ventured into being a Hollywood extra, as well as a repeat contestant on Chuck Barris' ABC daytime show The Dating Game .

Before his film career began, Negron was exposed to both dramatic and comedic legends: Lee Strasberg and Lucille Ball. In a work-study program at the famed Actors Studio, Negron worked as Strasberg's assistant. At Sherwood Oaks Experimental College in 1977, Negron worked as Ball's intern while she was a guest teacher at the school. [2]

Negron's motion picture appearances include Angels in the Outfield, The Aristocrats ; Better Off Dead, Call Me Claus, Easy Money as the tenacious son-in-law of Rodney Dangerfield's character, Fast Times at Ridgemont High, River's Edge, The Last Boy Scout , Nothing but Trouble, Punchline , The Stöned Age, Stuart Little, Young Doctors in Love, Funky Monkey , Biodome with Pauly Shore, How I Got into College , and Amy Heckerling's Vamps , in which he reprised his Fast Times at Ridgemont High pizza delivery scene. [2]

Among Negron's television appearances are guest star roles on That's So Raven , So Little Time, The Fresh Prince of Bel-Air , The Ben Stiller Show , Curb Your Enthusiasm , Reno 911! , Friends , My Wife and Kids , Seinfeld , ER , Party of Five , and Falcon Crest . In addition to being a semiregular guest on Off Beat Cinema , he co-starred in Smart Guy and Wizards of Waverly Place . He appeared in Comedy Central's UnCabaret special as well as its Amazon episodes. He appeared as Melinda Hill's date in one episode of the 2013 web series Romantic Encounters. [6] [7] His last television role was the part of an acting coach in Season 1, Episode 5 of The Comedians starring Billy Crystal and Josh Gad. He also appeared on an episode of The Dating Game on March 16, 1970.

In 2008, he wrote The Unbearable Lightness of Being Taylor Negron – A Fusion of Story and Song, directed by opera director David Schweitzer and co-starring singer/songwriter Logan Heftel. The show debuted to critical acclaim in the Green Room at the Edinburgh Comedy Festival. It also ran in the 2009 Best of New York Solo Festival at the SoHo Playhouse and at the Barrow Street Theater. Kate Copstick of The Scotsman wrote of it, "The underlying theme of this spellbinding hour seems to be Nietzschean – 'that which does not destroy me makes me strong'. And if that doesn't sound like out-and-out comedy, then that is good. Because the show is not out-and-out comedy. It is a mix of music, storytelling, and comedy." [8] His comedy essays have been published in the anthology Dirty Laundry (Phoenix Books) and Love West Hollywood: Reflections of Los Angeles (Alyson Books).

Director Justin Tanner revived Negron's play Gangster Planet, a four-character domestic comedy set during the 1992 Los Angeles riots, which was chosen by the Los Angeles Times as a Critic's Choice. Another play, Downward Facing Bitch, a suspense comedy, was developed with director Kiff Scholl. Negron was a regular contributor to Wendy Hammer's Tasty Words, Jill Solloway's "Sit and Spin", and Hilary Carlip's online magazine Fresh Yarns, as well as the Huffington Post . He performed regularly across the United States and was one of the original members of the UnCabaret, dubbed "The Mother Show of Alternative Comedy" by the LA Weekly , where Negron fused standup, dada poetry, and stream of consciousness storytelling.[ citation needed ]

Negron was an accomplished painter whose artwork has been featured in solo exhibitions at venues such as Los Angeles' Laemmle Royal Theater and the Hotel de Ville Lifestyle. Although he left his initial art school education when he was 19 years old, Negron later received training at the Academy of Fine Arts in San Francisco and the Art Students League in New York City. His work was influenced by Henri Matisse, Jean-Édouard Vuillard, Don Bachardy, and David Hockney. [2] [9] [10]

Vincent Andrew Schiavelli was an American character actor and food writer noted for his work on stage, screen and television. Described as an "instantly recognizable sad-faced actor", Schiavelli was diagnosed with Marfan syndrome in childhood. 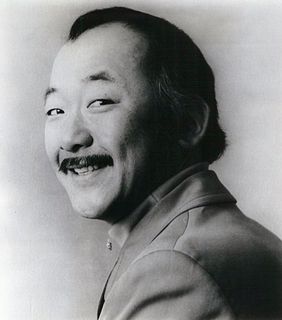 Noriyuki "Pat" Morita was an American-Japanese actor, voice actor, and comedian. He was known for his roles as Matsuo "Arnold" Takahashi on Happy Days (1975–1983), Mr. Miyagi in The Karate Kid film series, Mike Woo in The Mystery Files of Shelby Woo, and The Emperor of China in Mulan and Mulan II. Morita was nominated for the 1985 Academy Award for Best Supporting Actor for his portrayal of Mr. Miyagi in The Karate Kid. Morita also portrayed Ah Chew in Sanford and Son (1974–1976). Morita was the series lead actor in the television program Mr. T and Tina (1976) and in Ohara (1987–1988), a police-themed drama. The two shows made history for being among the few TV shows with an Asian American series lead. 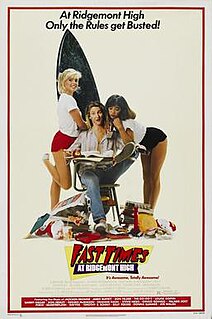 Fast Times at Ridgemont High is a 1982 American coming-of-age teen comedy film directed by Amy Heckerling and written by Cameron Crowe adapted from his 1981 book of the same title. Crowe went undercover at Clairemont High School in San Diego and wrote about his experiences.

Silver Lake is a residential and commercial neighborhood in the east central region of Los Angeles, California. Originally named Ivanhoe in the 1900s by a resident from Scotland, it was built around what was then a city reservoir which gives the district its name. The "Silver" in Silver Lake is not because of the water's color, but named for a local politician who helped create the reservoir. The area is known for its restaurants and hipster hangouts, and many notable people have made their homes there. The neighborhood has several public and private schools. 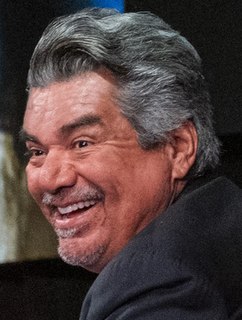 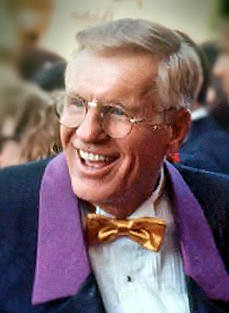 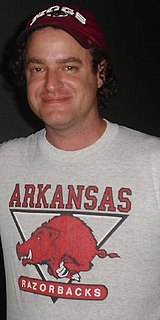 Matthew Gregory Besser is an American actor, comedian, director, producer, and writer, best known as one of the four founding members of the Upright Citizens Brigade sketch comedy troupe, who had their own show on Comedy Central from 1998–2000. He currently hosts the improvisation-based podcast Improv4humans on the Earwolf podcasting network. 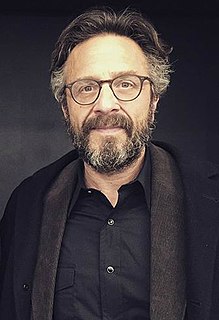 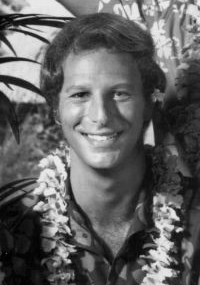 Leslie Allen Jordan is an American actor and writer. He is best known for his roles as Lonnie Garr in Hearts Afire (1993–1995), Beverly Leslie in Will & Grace, several characters in the American Horror Story franchise (2011–present), and Sid in The Cool Kids (2018–2019). One of his best-known onstage performances was in Sordid Lives, where he played Earl "Brother Boy" Ingram, a role he took to the big screen in the popular cult film of the same name. 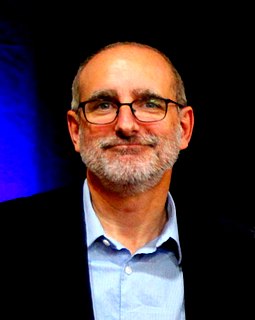 Dean Cameron is an American television and film actor and musician. He is known for his role as Francis "Chainsaw" Gremp in the 1987 Mark Harmon comedy Summer School. He also played Dave Marshak in Ski School and Ski School 2. Cameron, along with comedian Victor Isaac, tour in a two-person show that Cameron wrote, called The Nigerian Spam Scam Scam. 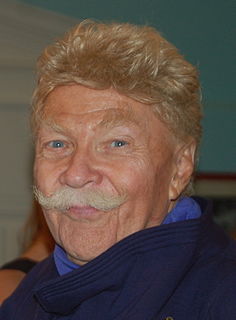 Charles Elmer "Rip" Taylor Jr. was an American actor and comedian, known for his exuberance and flamboyant personality, including his wild moustache, toupee, and his habit of showering himself with confetti. The Hollywood Reporter called him "a television and nightclub mainstay for more than six decades" who made thousands of nightclub and television appearances. 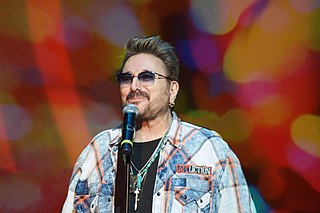 Charles Negron II is an American singer-songwriter, best known as one of the three lead vocalists in the rock band Three Dog Night, which he helped form in 1968.

Jason Stuart is an American actor and comedian.

Artist Linson is an American film producer, director and screenwriter.

Jack Kenny is an American writer, director, actor, and producer.

The Lee Strasberg Theatre and Film Institute is an acting school located at 115 East 15th Street between Union Square East and Irving Place in the Union Square neighborhood of New York, New York. The school was founded by Lee Strasberg, himself a noted actor and director, in 1969 to teach and promote the techniques of method acting.

David Dean Bottrell is an American actor, comedian and screenwriter best known for playing on numerous TV series & as Lincoln Meyer on 8 episodes of the ABC television series Boston Legal. He is also the author of "Working Actor: Breaking In, Making a Living and Making a Life in the Fabulous Trenches of Show Business" published by Ten Speed Press, a division of Random House.