Team Hoyt refers to father Dick Hoyt (June 1, 1940 – March 17, 2021) and his son Rick Hoyt (born January 10, 1962) from Holland, Massachusetts. The Hoyts competed together in various athletic endeavors, including marathons and Ironman Triathlons. Rick has cerebral palsy. During competition, Dick pulled Rick in a special boat as they would swim, carried him in a special seat in the front of a bicycle, and pushed him in a special wheelchair as they ran. Team Hoyt were inducted to the Ironman Hall of Fame and were recipients of ESPN's Jimmy V Award.

Rick Hoyt was diagnosed with cerebral palsy at birth after his umbilical cord became twisted around his neck, which caused the blockage of oxygen flow. [4] As a result, his brain could not properly control his muscles. [5] Many doctors encouraged the Hoyts to institutionalize Rick, informing them that he would be nothing more than a "vegetable." [5] His parents held on to the fact that Rick's eyes would follow them around the room, giving them hope that he would somehow be able to communicate someday. [5] The Hoyts took Rick every week to Children's Hospital in Boston, where they met a doctor who encouraged the Hoyts to treat Rick like any other child. Rick's mother Judy spent hours each day teaching Rick the alphabet with sandpaper letters and posting signs on every object in the house. In a short amount of time, Rick learned the alphabet. [4]

At the age of 11, after some persistence from his parents, Rick was fitted with a computer that enabled him to communicate, and it became clear that Rick was intelligent. [6] With this communication device, Rick was also able to attend public schools for the first time. [7]

Rick went on to graduate from Boston University in 1993 with a degree in special education. He later worked at Boston College in a computer lab helping to develop systems to aid in communication and other tasks for people with disabilities. [8]

Team Hoyt began in 1977 when Rick asked his father if they could run in a race together to benefit a lacrosse player at his school who had become paralyzed. He wanted to prove that life went on no matter your disability. [9] Dick Hoyt, a retired Lieutenant Colonel in the Air National Guard, was not a runner and was 36 years old. After their first race Rick said, "Dad, when I’m running, it feels like I’m not handicapped." After their initial five mile run, Dick began running every day with a bag of cement in the wheelchair because Rick was at school and studying, unable to train with him. [4] Dick was able to improve his fitness so much that even with pushing his son, he was able to obtain a personal record of a 5K run in 17 minutes. [10]

Through March 2016, the Hoyts had competed in 1,130 endurance events, including 72 marathons and six Ironman Triathlons. [11] They had run the Boston Marathon 32 times. Also adding to their list of achievements, Dick and Rick biked and ran across the U.S. in 1992, completing a full 3,735 miles (6,011 km) in 45 days. [11] [12] They also competed in triathlons. For the swim portion of a triathlon, Dick used a rope attached to his body to pull Rick sitting in a boat. For the cycle portion, Rick rode on the front of a specially designed tandem bike. [5] [13] For the run portion, Dick pushed Rick in his wheelchair. [7]

In the 2013 Boston Marathon, Team Hoyt had about a mile to go when two bombs exploded near the finish line; they were stopped by officials, along with thousands of other runners still running the race. They were not injured. A bystander with an SUV gave them a ride to the Sheraton hotel, and they were temporarily separated from Rick's wheelchair. [14]

On April 8, 2013, a bronze statue in honor of the Hoyts was dedicated near the start of the Boston Marathon in Hopkinton, Massachusetts. [20]

Team Hoyt was also featured on inspirational billboards within the U.S. [22] [23]

The London Marathon is an annual marathon event held in London, United Kingdom. Founded by athletes Chris Brasher and John Disley in 1981, it is typically held in April. The largely flat course is set around the River Thames, starting in Blackheath and finishing at The Mall. Hugh Brasher is the current Race Director and Nick Bitel its Chief Executive.

The marathon is a long-distance race with an official distance of 42.195 kilometres, usually run as a road race, but the distance can be covered on trail routes. The event was instituted in commemoration of the fabled run of the Greek soldier Pheidippides, a messenger from the Battle of Marathon to Athens, who reported the victory. The marathon can be completed by running or with a run/walk strategy. There are also wheelchair divisions.

An Ironman Triathlon is one of a series of long-distance triathlon races organized by the World Triathlon Corporation (WTC), consisting of a 2.4-mile (3.86 km) swim, a 112-mile (180.25 km) bicycle ride and a marathon 26.22-mile (42.20 km) run, raced in that order. It is widely considered one of the most difficult one-day sporting events in the world.

Timothy Philip Don is a triathlete from the United Kingdom.

Tyler Barbour Butterfield is an athlete from Bermuda. He competes in road bicycle racing and triathlon events. He became Bermuda's first ever professional triathlete in 2002. He was voted Bermuda's male athlete of the year in 2006 and 2013. Butterfield was the youngest male competitor at the second Olympic triathlon at the 2004 Summer Olympics. He placed thirty-fifth with a total time of 1:58:26.99.

James E. MacLaren was a motivational speaker and author, noted for his record-breaking performances in the marathon and Ironman triathlon after having his left leg amputated below the knee.

Madonna Buder, S.F.C.C., also known as the Iron Nun, is a Roman Catholic religious sister and Senior Olympian triathlete. Buder has the current world record for the oldest woman to ever finish an Ironman Triathlon, which she obtained at age 82 by finishing the Subaru Ironman Canada on August 26, 2012.

Commander Andrew James Baldwin, MD, USN is a US Naval Officer, ironman triathlete, television personality, humanitarian, and physician. Born and raised in Pennsylvania, he received his bachelors from Duke University and his medical degree from UCSF.

Rudy Garcia-Tolson is a Paralympic swimmer, runner and triathlete from the USA. 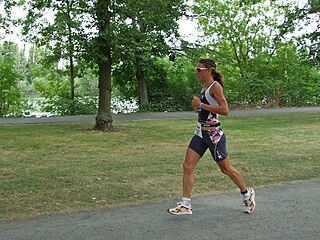 Jason P. Lester is an endurance athlete, the author of the book Running on Faith, and the 2009 ESPY Award winner for Best Male Athlete with a Disability. He is the first disabled athlete to complete the Ultraman World Championships. He is the Founder of EPIC5 Challenge, EP1CMAN and The NEVER STOP Foundation est. 2007.

Paul Martin is an American amputee athlete, Paralympian, speaker, and author. Paul is considered one of the foremost amputee triathletes in history and holds or has held several records in various events. 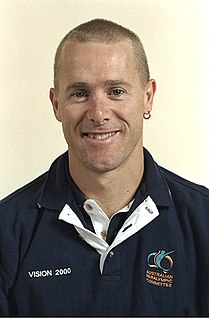 John Alexander Maclean, OAM is an Australian triathlete, rower, and motivational speaker. A promising rugby league player in his youth, he became a paraplegic after being knocked from his bicycle by a truck in 1988. He subsequently became the first paraplegic to finish the Ironman World Championship and the first to swim the English Channel. Later, he was part of the athletics team at both the Olympics and Paralympics in 2000, and won a silver medal in rowing at the 2008 Beijing Paralympics. In 2014, he completed the Nepean Triathlon without using a wheelchair, after regaining some use of his legs through Ware K Tremor therapy. He is the founder of the John Maclean Foundation, which assists wheelchair users under the age of 18. As a motivational speaker, his clients have included eBay and Pfizer. 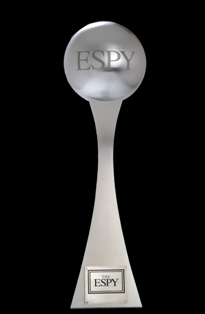 The Jimmy V Award is awarded as part of the ESPY Awards to "a deserving member of the sporting world who has overcome great obstacles through perseverance and determination". The award is named in honor of North Carolina State University men's basketball coach Jim Valvano, who gave an acceptance speech after receiving the Arthur Ashe Courage Award at the 1993 ESPY Awards ceremony which "brought a howling, teary-eyed Madison Square Garden to its feet". Valvano died from adenocarcinoma two months after receiving the award. The Jimmy V Award trophy, designed by sculptor Lawrence Nowlan, is presented at the annual awards ceremony in Los Angeles by The V Foundation, a charitable organization founded by ESPN and Valvano in 1993, involved in raising money to fund cancer research grants across the United States.

runDisney, is the road race division of Disney Sports Enterprises, a unit of Disney Parks, Experiences and Products, a segment and subsidiary of The Walt Disney Company. The division is designed to get runners to plan a "runcation", a vacation planned to coincide with the race they signed up for.