The Teatro dell'Opera di Roma (Rome Opera House) is an opera house in Rome, Italy. Originally opened in November 1880 as the 2,212 seat Costanzi Theatre, it has undergone several changes of name as well modifications and improvements. The present house seats 1,600.

The Teatro dell'Opera was originally known as the Teatro Costanzi after the contractor who built it, Domenico Costanzi  [ it ] (1819–1898). It was financed by Costanzi, who commissioned the Milanese architect Achille Sfondrini (1836–1900), a specialist in the building and renovation of theatres. The opera house was built in eighteen months, on the site where the house of Heliogabalus stood in ancient times, and was inaugurated on 27 November 1880 with a performance of Semiramide by Gioachino Rossini.

Designing the theatre, Sfondrini paid particular attention to the acoustics, conceiving the interior structure as a "resonance chamber", as is evident from the horseshoe shape in particular. With a seating capacity of 2,212, the house had three tiers of boxes, an amphitheatre and two separate galleries, surmounted by a dome adorned with splendid frescoes by Annibale Brugnoli.

Costanzi was obliged to manage the theater himself. Under his direction, and despite financial problems, the opera house held many world premieres of operas, including Cavalleria rusticana by Pietro Mascagni on 17 May 1890. For a brief period the theatre was managed by Costanzi's son, Enrico, who gained renown by organizing another great premiere, that of Tosca by Giacomo Puccini on 14 January 1900.

In 1907, the Teatro Costanzi was purchased by the impresario Walter Mocchi  [ it ] (1871–1955) on behalf of the Società Teatrale Internazionale e Nazionale (STIN). In 1912 Mocchi's wife, Emma Carelli, became the managing director of the new Impresa Costanzi, as the theatre was later known, following various changes in the company structure. During the fourteen years of her tenure, major works which had not been performed before in Rome (or even in Italy) were staged. These included La fanciulla del West , Turandot and Il trittico by Giacomo Puccini; Parsifal by Richard Wagner; Francesca da Rimini (Zandonai) by Riccardo Zandonai; Boris Godunov by Modest Mussorgsky; Samson et Dalila by Camille Saint-Saëns and many others. Diaghilev's Ballets Russes also performed.

In November 1926 the Costanzi was bought by the Rome City Council and its name changed to Teatro Reale dell'Opera. A partial rebuilding ensued, led by architect Marcello Piacentini and lasting fifteen months. The house re-opened on 27 February 1928 with the opera Nerone by Arrigo Boito.

Chief among several major changes was the relocated entrance, from the street formerly known as Via del Teatro (where the garden of the Hotel Quirinale is now) to the opposite side, where Piazza Beniamino Gigli exists today. In addition, the amphitheatre inside the theatre was replaced by a fourth tier of boxes (now the third tier) and the balcony. The interior was embellished by new stuccowork, decorations, and furnishings, including a magnificent chandelier measuring six meters in diameter and composed of 27,000 crystal drops.

Above the proscenium arch is a plaque commemorating the rebuilding: "Vittorio Emanuele III Rege, Benito Mussolini Duce, Lodovicus Spada Potenziani, Romae Gubernator Restituit MCMXXVIII—VI”". Confusingly the dates appear to be back to front. (The VI refers to the sixth year after the Fascist's March on Rome of 1922.)

Following the end of monarchy, the name was simplified to Teatro dell'Opera and, in 1958, the building was again remodeled and modernized. Rome City Council again commissioned architect Marcello Piacentini, who radically altered the building's style, notably with regard to the facade, entrance and foyer, each of these taking the form we know today.

The theater's legendary acoustics still bear comparison with any other auditorium in the world. The seating capacity is about 1,600. The house was retrofitted with air-conditioning subsequent to a restoration, which provided improvements to the interior. The stucco work was completely restored, the great proscenium arch strengthened, and a parquet floor of solid oak blocks laid to replace the previous one.

On 2 January 1958, the theater was the venue for a controversial performance of Norma starring Maria Callas in the presence of the President of Italy: for health reasons, Callas abandoned the performance after the first act (the opera company had not engaged an understudy).

The post-war period saw celebrated productions, including Mozart's Le nozze di Figaro in 1964 and Verdi's Don Carlo in 1965, both conducted by Carlo Maria Giulini and directed by Luchino Visconti.

In 1992, Gian Carlo Menotti was appointed Artistic Director of the Teatro dell'Opera di Roma, a post he maintained for two years before being asked to resign over conflicts with the theatre's managers involving Menotti's insistence of staging Wagner's Lohengrin . [1] [2]

From 2001 to 2010, the music director and chief conductor of the company was Gianluigi Gelmetti. He was due to be succeeded in these posts by Riccardo Muti, as announced in August 2009, but Muti demurred, citing in La Repubblica in October 2010 "general difficulties that are plaguing the Italian opera houses". [3] Later, Muti assumed a role similar to that of music director but without title. Notable productions under Muti have included Gluck's Iphigénie en Aulide (2009), Verdi's Nabucco (2011), Simon Boccanegra (2012) and Ernani (2013).

The name "Teatro Costanzi" remains officially in use, to refer to the main auditorium.

The outdoor theatre at the Baths of Caracalla, with the Roman ruins as the backdrop, is the venue for the opera company's summertime presentations in Rome. 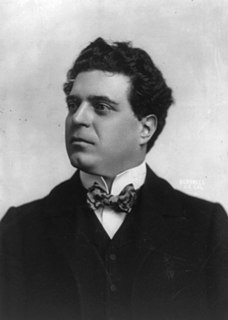 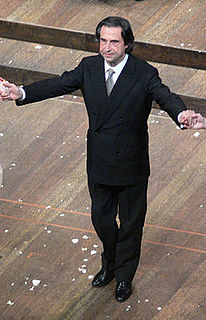 Riccardo Muti, is an Italian conductor. He currently holds two music directorships, at the Chicago Symphony Orchestra and at the Orchestra Giovanile Luigi Cherubini. Muti has previously held posts at the Maggio Musicale in Florence, the Philharmonia Orchestra in London, the Philadelphia Orchestra, the Teatro alla Scala in Milan, and the Salzburg Whitsun Festival. 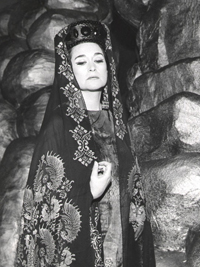 Gianluigi Gelmetti OMRI, was an Italian-Monégasque conductor and composer.

Daniele Gatti is an Italian conductor. He is currently artistic advisor of the Mahler Chamber Orchestra and music director of the Teatro dell'Opera di Roma.

The Maggio Musicale Fiorentino is an annual Italian arts festival in Florence, including a notable opera festival, under the auspices of the Opera di Firenze. The festival occurs between late April into June annually, typically with four operas.

Vladimir Stoyanov is a Bulgarian operatic baritone. He graduated from Lyubomir Pipkov Music High-School in 1989 and the Pancho Vladigerov State Music Academy in 1995. 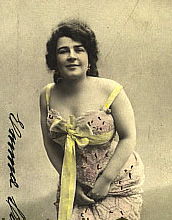 Emma Carelli was an Italian operatic soprano who was particularly associated with the dramatic soprano roles of the verismo repertoire and the works of Richard Wagner. After a singing career which lasted almost two decades, she managed the Teatro Costanzi in Rome for almost fifteen years. After studying with her father, Beniamino Carelli, at the Conservatorio San Pietro a Majella, she made her professional debut in 1895 in the title role of Mercadante's La vestale during the centenary celebrations at Altamura and went on to appear in the opera houses of many Italian cities. In 1898 she married the left-wing politician, self-made millionaire, and later impresario, Walter Mocchi.

Franco Lo Giudice was an Italian tenor who had a successful international opera career during the first half of the 20th century. He was an important exponent of the works of Riccardo Zandonai, notably starring in the world premieres of his operas I cavalieri di Ekebù (1925) and Giuliano (1928). His voice is preserved on a number of recordings made with the HMV, Parlophone, and Pathé record labels. Music critic Alan Blyth described him as a "fiery, strong tenor" who "excelled in verismo parts".

Bernadette Manca di Nissa is an Italian operatic contralto who has sung leading roles in the principal opera houses of Italy as well as internationally. She has appeared at La Scala in Milan, La Fenice in Venice, Teatro San Carlo in Naples, and the Maggio Musicale Fiorentino in Florence as well as at the Royal Opera House, Covent Garden and Gran Teatre del Liceu in Barcelona.

PierLuigi Samaritani was a renowned opera director/production designer, who began his career at a young age, working alongside some of the greatest names in theatre, opera and ballet, such as Lila de Nobili, Giancarlo Menotti, Franco Zeffirelli, Luciano Pavarotti, Mikhail Baryshnikov, Rudolf Nureyev and many more. Samaritani had an enormous talent, which allowed him to take on all the roles the theatre, opera and ballet demanded, making sure to always be involved in all aspects of his productions even when delegating. From the creation of his "sketches" of the set, which were more like works of art in and of themselves to the smallest change in an extra’s costume, he was a true perfectionist preoccupied with every detail. His productions graced the stage of countless opera houses and theaters, amongst them La Scala di Milano, Teatro Regio of Parma, The Metropolitan Opera House, American Ballet Theatre and the Festival of Two Worlds at Spoleto, where he collaborated for many years, alongside his dear friend, Gian Carlo Menotti. The Teatro Lirico Sperimentale di Spoleto founded in 1947 in Spoleto, by Adriano Belli created a special award carrying the name of Pier Luigi Samaritani, awarded each year to the set designer with the best set design of the opera season.

Amelia Felle is an Italian operatic soprano and voice teacher. Born in Bari, she has been active on the stages of Italian and European opera houses and concert halls since her debut in 1981. She holds the chair in vocal chamber music at the Conservatorio di Santa Cecilia in Rome, a position she previously held at the Conservatorio Tito Schipa in Lecce. 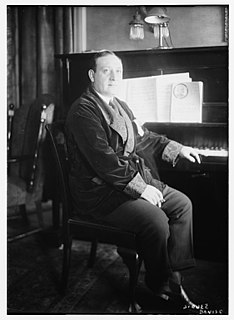 Edoardo Vitale was an Italian orchestral conductor. He was director of La Scala in substitution of Toscanini from 1908 to 1910, though he conducted most of his career at the Teatro Costanzi, now Teatro dell'Opera di Roma. His orchestration and conducting has been described as passionate.