Arthur Edward 'Ted' Hufton (25 November 1892 – 2 February 1967) was an England international goalkeeper who earned six caps for his country. Born in Southwell in Nottinghamshire he spent the majority of his career at West Ham United but also had spells at Sheffield United and Watford.

He began his playing career at Atlas & Norfolk Works in Sheffield, before becoming a Sheffield United player [2] for a fee of £20. [3] He was generally regarded as understudy to Harold Gough which limited his appearances during his time at Bramall Lane. [3]

With the outbreak of World War I he joined the Coldstream Guards but was wounded in France. On recovering he would play regularly for West Ham United as a guest player and eventually transferred to the Hammers permanently after the end of the conflict. [3]

West Ham United paid £300 for his services fee and he went on to play for the club until 1932, becoming a Hammers legend. [3] He made 456 appearances for West Ham (54 as a wartime guest), ranking him twelfth in the list of loyal servants to the club, even playing at right back for one of these games.[ citation needed ]

He was part of the West Ham team that were elected to The Football League for the first time in 1919, and went on to win promotion to the First Division during the 1922–23 season.[ citation needed ] He also appeared in the famous White Horse Final, the first FA Cup final at the brand new Wembley Stadium. [2]

Ted Hufton finished his playing career with Watford, for whom he played two league matches in the 1932–33 season. [2]

He made his international début against Belgium on 1 November 1923, the game finishing 2–2. [4] During his second international game, on 22 October 1927 at Windsor Park, Belfast, against Ireland, Hufton broke his arm and had to leave the pitch after 40 minutes to be rushed to hospital. England's Jack Hill also had to leave the game, at half-time, due to injury. England continued the second half with only nine players and lost, 2–0. [5] In only his third game for his country, on 28 March 1928, an England team that was packed with many big stars, including Dixie Dean, Roy Goodall and Joe Bradford was beaten at home 5–1 by Scotland. [6] He earned his final cap as an England player on 15 May 1929 when England lost to Spain, who narrowly edged a 4–3 victory. [4]

On his retirement from playing he went into the motor trade in London and after World War II returned to Upton Park to act as a press room steward on match days. [3] He suffered with bad health in later life and following a road accident, and with failing eyesight, he moved to Swansea where he died in 1967. [3]

"Ted Hufton, the goalkeeper, was another of my heroes, and he was always in the Press Room after a match at Upton Park, dispensing yarns and memories with the utmost amiability." - Ted Fenton, West Ham United Manager.[ citation needed ] 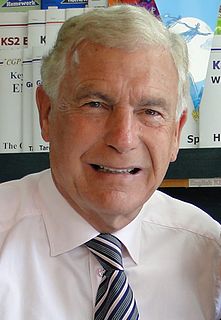 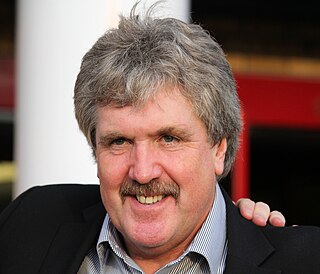 The 1985–1986 season saw manager John Lyall lead West Ham United to their highest ever league finish, coming a close third behind Liverpool and Everton. They won 26 of their 42 games and finished with 84 points, two behind Everton and four behind eventual double winners Liverpool. The Hammers team of 1985–86 became known as The Boys of 86.

During the 2004–05 English football season, West Ham United competed in the Football League Championship, having lost the previous season's play-off final 0–1 to Crystal Palace at the Millennium Stadium.

Andrew Malcolm was an English professional footballer who played as a wing-half in the Football League for West Ham United, Chelsea and Queens Park Rangers. 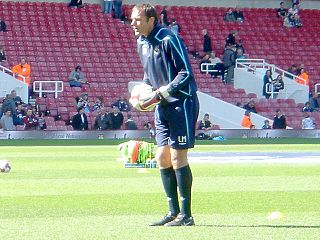 During the 2006–07 English football season, West Ham United competed in the FA Premier League. They finished the season in 15th place. 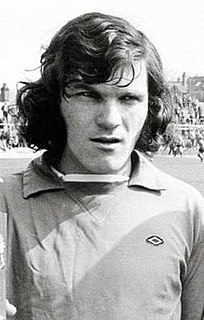 Stephen Victor Death was an English football goalkeeper who played for Reading for almost the entirety of his career. Death was one of the longest-serving players to appear for Reading. He has been described as "Reading's greatest ever goalkeeper".

John Tresadern was an English professional footballer and football manager. He played twice for the England national side. 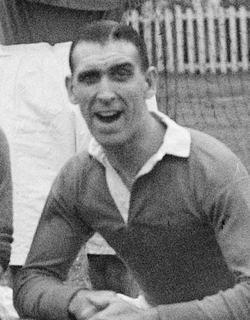 Leonard Arthur Goulden was an English footballer, born at Homerton, in Hackney, London, and raised in nearby Plaistow. His son Roy was also a footballer.

Stanley George James Earle was an English footballer who played as an inside-right in the Football League for Arsenal, West Ham United and Clapton Orient. He was capped for England at amateur and full levels.

Billy Jennings is an English former footballer who played as a striker in the Football League for Watford, West Ham United, Leyton Orient and Luton Town. He also played in the North American Soccer League for Chicago Sting.

Robert Ferguson is a Scottish former footballer, who played as a goalkeeper.

John Henry Hill was an English footballer who played in his club career with various teams, including Burnley and Newcastle United between 1920 and 1934. He made 11 appearances for England, eight as captain. He subsequently played for, and then managed, Hull City.

David Baillie was an English footballer who played as a goalkeeper for Coryton, West Ham United and Chester City.

George William Robert Watson was an English footballer who played as a goalkeeper in the Football League for West Ham United.