The Emperor of Ethiopia was the hereditary ruler of the Ethiopian Empire, until the abolition of the monarchy in 1975. The Emperor was the head of state and head of government, with ultimate executive, judicial and legislative power in that country. A National Geographic Magazine article called imperial Ethiopia "nominally a constitutional monarchy; in fact [it was] a benevolent autocracy".

Ethiopia, Oromo: Itiyoophiyaa, Somali: Itoobiya, Hebrew: אתיופיה, -officially the Federal Democratic Republic of Ethiopia, is a country in the northeastern part of Africa, popularly known as the Horn of Africa. It shares borders with Eritrea to the north, Djibouti to the northeast, and Somalia to the east, Sudan and South Sudan to the west, and Kenya to the south. With over 102 million inhabitants, Ethiopia is the most populous landlocked country in the world and the second-most populous nation on the African continent that covers a total area of 1,100,000 square kilometres (420,000 sq mi). Its capital and largest city is Addis Ababa, which lies a few miles west of the East African Rift that splits the country into the Nubian Plate and the Somali Plate.

The Solomonic dynasty, also known as the House of Solomon, is the former ruling Imperial House of the Ethiopian Empire. The dynasty's members claim patrilineal descent from the biblical King Solomon and the Queen of Sheba. Tradition asserts that the Queen gave birth to Menelik I after her biblically described visit to Solomon in Jerusalem. In 1270, the Zagwe dynasty of Ethiopia was overthrown by Yekuno Amlak, who claimed descent from Solomon and reinitiated the Solomonic era of Ethiopia. The dynasty would last until 1974, ended by a coup d'état and deposition of the emperor Haile Selassie.

Tekle Haymanot became Emperor following Iyasus' retirement to an island in Lake Tana. With the support of his mother Empress Malakotawit, some of the officials argued, after the precedent of king Kaleb, that Iyasu had abdicated, and crowned Tekle Haymanot nəgusä nägäst in Gondar. This act was not embraced by the entire state, and the resulting civil strife led to Iyasu's murder at the order of his son Tekle Haymanot. 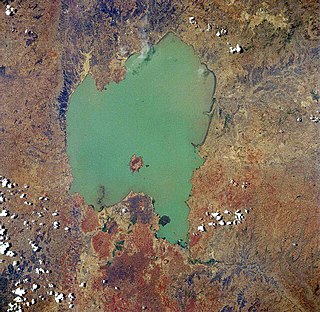 Lake Tana is the source of the Blue Nile and is the largest lake in Ethiopia. Located in Amhara Region in the north-western Ethiopian Highlands, the lake is approximately 84 kilometres long and 66 kilometres wide, with a maximum depth of 15 metres, and an elevation of 1,788 metres. Lake Tana is fed by the Lesser Abay, Reb and Gumara rivers. Its surface area ranges from 3,000 to 3,500 square kilometres, depending on season and rainfall. The lake level has been regulated since the construction of the control weir where the lake discharges into the Blue Nile. This controls the flow to the Blue Nile Falls and hydro-power station.

Kaleb is perhaps the best-documented, if not best-known, King of Axum, a kingdom that was situated in modern-day Eritrea and Tigray, Ethiopia.

Gondar or Gonder is a city and separate woreda in Ethiopia. Located in the Semien Gondar Zone of the Amhara Region, Gondar is north of Tana Lake on the Lesser Angereb River and southwest of the Simien Mountains. It has a latitude and longitude of 12°36′N37°28′E with an elevation of 2133 meters above sea level. It is surrounded by the Gondar Zuria woreda. Gondar served as a strong Christian kingdom for many years.

In September, 1707, a rebel in Gojjam declared himself nəgusä nägäst under the name Amda Seyon, and made his way to the capital city, where he had himself crowned. Tekle Haymanot quickly returned to Gondar, despite the difficulty of travel during the rainy season, forced the usurper to flee, and celebrated his triumph. Amda Seyon was later killed in battle in Maitsa. [1] However his unpopularity for having ordered the murder of his widely revered father was profound and he never overcame it. The involvement of his mother Melekotawit, and the acceptance of his position by other members of the dynasty did irreparable harm to the image of the monarchy. His own courtiers plotted against him, and discussions abounded about whether it was worthy to keep such a corrupt dynasty in power.

Amda Seyon was the Emperor of Ethiopia for less than one month. Amda Seyon was proclaimed negusä nägäst in September 1707 at Yebaba in Gojjam. He made his way to Gondar, where he had himself crowned, and within a short time gained the support of the friends of the late Emperor Iyasu. Emperor Tekle Haymanot quickly returned to the capital that same month, despite the difficulty of travel during the rainy season, and forced the usurper to flee.

While travelling in the provinces, Tekle Haymanot was stabbed to death by some of his late father's courtiers. [2]

Some historians date the beginning of the Ethiopian Zemene Mesafint or "Era of the Princes" (a time of disorder when the power of the monarchy was eclipsed by the power of local warlords) the murder of Iyasu the Great by his son Tekle Haymanot, and the resultant decline in the prestige of the dynasty. 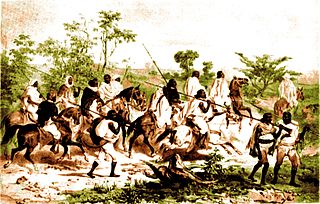 Iyasu I, also known as Iyasu the Great, was nəgusä nägäst, r. 19 July 1682 – 13 October 1706 of Ethiopia, and a member of the Solomonic dynasty. He was the son of Yohannes I and Empress Sabla Wangel.

Tewoflos or Theophilus, was nəgusä nägäst of Ethiopia and a member of the Solomonic dynasty. He was the brother of Iyasu I, and one of four sons of Fasilides.

Dawit III, throne name Adbar Sagad, also known as Dawit the Singer, was nəgusä nägäst of the Ethiopian Empire and a member of the Solomonic dynasty. He was the son of Iyasu I and his concubine Kedeste Krestos.

Bakaffa was nəgusä nägäst of Ethiopia, and a member of the Solomonic dynasty. He was a son of Emperor Iyasu I and brother to Emperors Tekle Haymanot I and Dawit III.

Iyasu II or Joshua II was nəgusä nägäst of Ethiopia, and a member of the Gondar branch of the Solomonic dynasty. He was the son of Emperor Bakaffa and Empress Mentewab.

Amda Iyasus was Emperor of Abyssinia, and a member of the Solomonic dynasty. He was the younger son of Takla Maryam.

Eskender was Emperor (1478–1494) of Ethiopia, and a member of the Solomonic dynasty. He was the son of Emperor Baeda Maryam I by Romna.

Yohannes II or John II, was nəgusä nägäst of Ethiopia, and a member of the Solomonic dynasty. He was the son of Iyasu I, and brother of Emperors Tekle Haymanot I, Dawit III and Bakaffa.

Iyasu III or Joshua III was nəgusä nägäst of Ethiopia, and a member of the Solomonic dynasty. He was the son of Abeto Azequ, and the grandson of Iyasu II.

Tekle Haymanot was proclaimed Emperor of Ethiopia by the Emperor Baede Maryam's courtiers. He established his palace in Gondar, and ruled there for around a year. He may be identical with the Emperor "Haimanot" mentioned by Henry Salt, who ruled for a year between Iyasu III and Hezqeyas and had died before 1810.

Mikael Sehul was a Ras or governor of Tigray 1748–71 and again from 1772 until his death. He was a major political figure during the reign of Emperor Iyasu II and his successors until almost the time of his death.

Hailu Tekle Haymanot, KBE (1868–1950), also named Hailu II of Gojjam, was an army commander and a member of the nobility of the Ethiopian Empire. He represented a provincial ruling elite who were often at odds with the Ethiopian central government. Hailu Tekle Haymanot was an independent-minded potentate who, throughout his life, was mistrustful of and mistrusted by the Emperor. 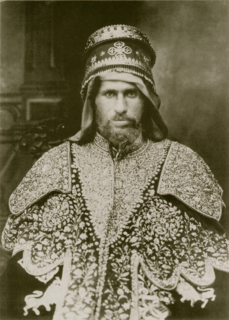