Teleférico do Alemão was a gondola lift service operating in Rio de Janeiro, Brazil. The service opened on 7 July 2011 and closed in September 2016, following the withdrawal of state funding. The line operated between Bonsucesso Station  [ pt ] and Complexo do Alemão, with a total of six stations along the route. [1] The duration of a single ride from start to finish is 16 minutes. [2]

A gondola lift is a means of cable transport and type of aerial lift which is supported and propelled by cables from above. It consists of a loop of steel cable that is strung between two stations, sometimes over intermediate supporting towers. The cable is driven by a bullwheel in a terminal, which is typically connected to an engine or electric motor. They are often considered continuous systems since they feature a haul rope which continuously moves and circulates around two terminal stations. Depending on the combination of cables used for support and/or haulage and the type of grip, the capacity, cost, and functionality of a gondola lift will differ dramatically. Because of the proliferation of such systems in the Alpine regions of Europe, the French language name of Télécabine is also used in an English language context.

The service, announced as part of PAC 2 (the Brazilian federal funding program for infrastructure) consisted of a 2.1 mile gondola line running above the Complexo do Alemão group of favelas, and cost 210 million Brazilian reais to build. [3] [4] The decision to fund the construction of the line saw heavy criticism, with local media describing it as a vanity project, [5] with the money potentially being better spent elsewhere. The system received 9000 riders daily whilst in operation. [6]

A favela is a unique, low and middle-income, and unregulated neighborhood in Brazil that has experienced historical governmental neglect. The first favela, now known as Providência in the center of Rio de Janeiro, appeared in the late 19th century, built by soldiers who had nowhere to live following the Canudos War. Some of the first settlements were called bairros africanos. Over the years, many former enslaved Africans moved in. Even before the first favela came into being, poor citizens were pushed away from the city and forced to live in the far suburbs. However, most modern favelas appeared in the 1970s due to rural exodus, when many people left rural areas of Brazil and moved to cities. Unable to find places to live, many people found themselves in favelas. Census data released in December 2011 by the Brazilian Institute of Geography and Statistics (IBGE) showed that in 2010, about 6 percent of the Brazilian population lived in slums. 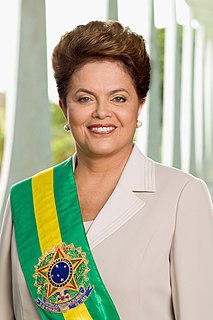 Dilma Vana Rousseff is a Brazilian economist and politician who served as the 36th president of Brazil, holding the position from 2011 until her impeachment and removal from office on 31 August 2016. She was the first woman to hold the Brazilian presidency and had previously served as Chief of Staff to former president Luiz Inácio Lula da Silva from 2005 to 2010. 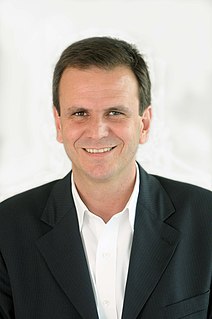 Eduardo da Costa Paes is a Brazilian politician who was the mayor of the city of Rio de Janeiro, having defeated Fernando Gabeira in the 2008 Elections. On 12 August 2012, at the 2012 Summer Olympics closing ceremony, Paes received the Olympic Flag, via Jacques Rogge, from London Mayor, Boris Johnson.

Services were suspended in 2016 because the state couldn't pay the consortium anymore. [9] [10]

The line consists of six stations between Bonsucesso Station  [ pt ] and Palmeiras Station in the Complexo do Alemão favela. The 152 gondolas take 16 minutes to traverse the 3.5 km route. [1] [11]

Jacarezinho is a Brazilian neighborhood and also a favela with more than 60,300 residents living in an area of 40 ha. The place is located in the North Zone of Rio de Janeiro city, and it borders the neighborhoods of Jacaré, Méier, Engenho Novo and Triagem. It is the third largest favela in Rio de Janeiro, only behind Rocinha and Complexo do Alemão. The favela expanded along with the city's industrialization, and it became the biggest favela in Rio de Janeiro by the mid-20th century, with a population of 23,000 in 1960. The crucial element in its growth was the industrial boom in the nearby Méier district after World War II, according to historian by Julio César Pino, author of a book about Jacarezinho.

Tim Lopes was a Brazilian investigative journalist and producer for the Brazilian television network Rede Globo. In 2002, the media reported him missing while working undercover on a story in one of Rio's favelas. It was later learned that Lopes had been accosted by drug traffickers who controlled the area, was kidnapped, driven to the top of a neighboring favela in the trunk of a car, tied to a tree and subjected to a mock trial, tortured by having his hands, arms, and legs severed with a sword while still alive, and then had his body placed within tires, covered in gasoline and set on fire—a practice that traffickers have dubbed micro-ondas.

Metrocable is a gondola lift system implemented by the City Council of Medellín, Colombia, with the purpose of providing a complementary transportation service to that of Medellín's Metro. It was designed to reach some of the city's informal settlements on the steep hills that mark its topography. It is largely considered to be the first urban cable propelled transit system in South America. There were plans in the city for some decades before its inception for some form of transportation that took account of the difficult topography of the region. These ideas date back to the use of cable-car technology for exporting coffee starting in the 1930s between the city of Manizales, to the south of Medellín, and the Cauca River 2,000 metres (6,600 ft) below. In its modern incarnation, it was the result of a joint effort between the city's elected mayor, Sergio Fajardo, and the Metro Company. For some, the initial conception of this system was indirectly inspired by the Caracas Aerial Tramway which was designed primarily to carry passengers to a luxury hotel in the 1950s.

The Complexo do Alemão massacre was the result of an ongoing conflict between drug dealers and the police in the borough of the same name in Rio de Janeiro, which consisted of a group of large favelas in the northern region of the city. The massacre happened on June 27, 2007, when a large Military and Civil Police operation killed 19 people and injured several others. The Order of Attorneys of Brazil issued a report claiming that at least eleven of the people killed had no relations with drug trafficking whatsoever. Until the end of the XV Pan-American Games a large siege was formed by the police in the region—to secure the safety of the international event, some people claim. While it eventually got attached the demotic sobriquet Gaza strip, a report published by the federal government revealed that there were executions at the operation. 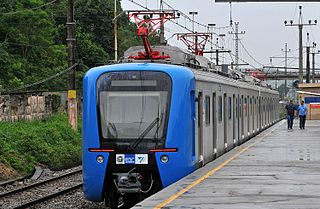 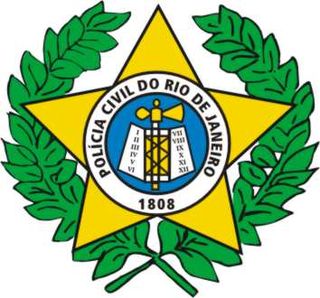 The Civil Police of Rio de Janeiro State is the police force responsible for criminal investigations in Rio de Janeiro, Brazil. Formed in 1808, it is subordinated to the state government and directed by a Chief of Police, chosen by the state's Governor. 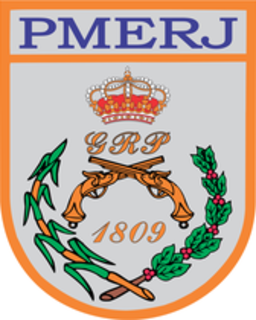 The Military Police of Rio de Janeiro State (PMERJ) like other military polices in Brazil is a reserve and ancillary force of the Brazilian Army, and part of the System of Public Security and Brazilian Social Protection. Its members are called "State Military" personnel.

Alemão, sometimes Alemao may refer to:

The Pacifying Police Unit, abbreviated UPP, is a law enforcement and social services program pioneered in the state of Rio de Janeiro, Brazil, which aims to reclaim territories, most commonly favelas, controlled by gangs of drug dealers. The program was created and implemented by State Public Security Secretary José Mariano Beltrame, with the backing of Rio Governor Sérgio Cabral. The stated goal of Rio's government is to install 40 UPPs by 2014. By May 2013, 231 favelas had come under the UPP umbrella.

In November 2010, there was a major security crisis in the Brazilian city of Rio de Janeiro and some of its neighboring cities. The city's criminal drug trafficking factions initiated a series of attacks in response to the government placing permanent police forces into Rio's slums. 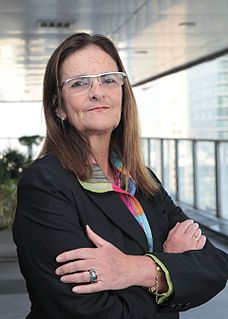 Maria das Graças Foster, commonly known as Graça Foster, is a Brazilian business executive and chemical engineer. She was the CEO of Petrobras-Petróleo Brasil, Brazil's state-controlled oil company, which is located in Rio de Janeiro. She was the first woman in the world to head a major oil-and-gas company. In April 2012, she was listed on the Time 100 list of the most influential people in the world. In 2014, she was recognized as the 16th most powerful woman in the world by Forbes Magazine. She was ranked by Fortune magazine in 2013 as the Most Powerful Woman in Business for the second year in a row.

Complexo - Universo Paralelo is a 2011 Portuguese documentary film about life in the most dangerous favela in Rio de Janeiro, Complexo do Alemão, directed by Mário Patrocínio. 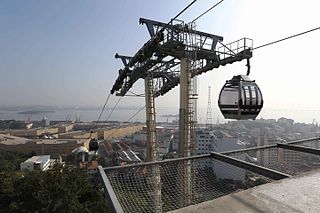 Caio César Ignácio Cardoso de Melo was a Brazilian actor, voice actor and police officer. César provided the Brazilian Portuguese voiceover of Harry Potter in all eight of the Harry Potter films from 2001 to 2011. 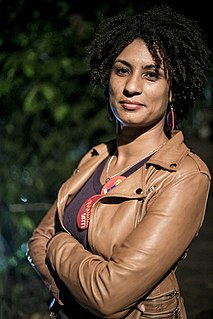 Marielle Franco was a Brazilian politician, feminist, and human rights activist. After earning a master's degree in public administration from the Fluminense Federal University, she served as a city councillor of the Municipal Chamber of Rio de Janeiro for the Socialism and Liberty Party (PSOL) from January 2017 until her death.

Tuany Tomas Nascimento is a Brazilian ballet dancer, rhythmic gymnast, and dance teacher. She is the founder and director of Na Ponta dos Pés, a dance school that provides ballet training for underprivileged girls living in the favelas of Complexo do Alemão in Rio de Janeiro.