In mythology, folklore and the Shinto religion of Japan, Tenjin (天神) is the patron kami (deity) of academics, scholarship, of learning, and of the intelligentsia.

Tenjin is the deification of Sugawara no Michizane (845–903), the famous scholar, poet and politician of the Heian period.

Ten (天) means sky and jin (神) means god or deity. The original meaning of Tenjin, sky deity, is almost the same as that of Raijin (a god of thunder).

In Japanese history, Sugawara no Michizane rose high in the government of the country in the late 9th century, but at the beginning of the 10th century he fell victim to the plots of a rival, a member of the Fujiwara clan, and was demoted and exiled to Kyushu. He died in exile in 903. On July 21, 930, the capital city was struck by heavy rain and lightning, and many of the leading Fujiwara died, while fires caused by lightning and floods destroyed many of their residences. The court of the Emperor drew the conclusion that the disturbances were caused by Michizane's angry spirit, and, to placate it, the Emperor restored all Michizane's offices, burned the official order of exile, and ordered that the poet be worshiped under the name Tenjin, which means sky deity. A shrine was established at Kitano; it was immediately raised to the first rank of official shrines, supported directly by the government.

Evolution into the patron of scholars

For the first few centuries, then, Tenjin was seen as a god of natural disasters, worshiped to placate him and avoid his curses. However, Michizane was a famous poet and scholar in his lifetime, one of the greatest of the Heian period, and in the Edo period scholars and educators came to regard him as a patron of scholarship. By the present day, this view has completely eclipsed natural disasters in popular worship.

Tenjin's influence is now regarded as particularly strong in passing exams, and so many school students, and their parents, pray for success at his shrine before important entrance exams, and return afterwards, if appropriate, to give thanks for success.

Michizane was very fond of ume trees, writing a famous poem from exile in which he lamented the absence of a particular tree he had loved in the capital. Legend states that it flew from Kyoto to Dazaifu in Kyushu to be with him, and the tree is still on show at his shrine there. As a result, shrines to Tenjin often are planted with many ume trees. By coincidence, these trees blossom in February, the same time of year as exam results are announced, and so it is common for Tenjin shrines to hold a festival around this time.

The animal particularly associated with Tenjin is the bull because, according to legend, during Michizane's funeral procession, the bull pulling the cart bearing his remains refused to go any further than a certain spot, which was then built up into his shrine.

The main shrines to this kami are Kitano Tenman-gū in Kyoto and Dazaifu Tenman-gū in Fukuoka Prefecture, and the top three are rounded out by Egara Tenjin Shrine in Kamakura, but there are many other shrines dedicated to him across Japan. These shrines are called Tenman-gū (天満宮). A group of three notable shrines has been called the Three Great Tenjin Shrines.

A Shinto shrine is a structure whose main purpose is to house ("enshrine") one or more kami. Its most important building is used for the safekeeping of sacred objects, and not for worship. Although only one word ("shrine") is used in English, in Japanese, Shinto shrines may carry any one of many different, non-equivalent names like gongen, -gū, jinja, jingū, mori, myōjin, -sha, taisha, ubusuna, or yashiro. 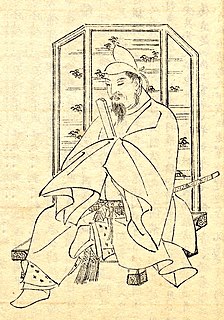 Goryō (御霊)[ɡoɾʲoː] are vengeful Japanese ghosts from the aristocratic classes, especially those who have been martyred.

Mitami ShrineMitami-jinja 美多彌神社 is a Shinto shrine in Sakai, Osaka Prefecture, Japan. It is located in Senboku New Town near Komyoike Station. It is accessible on the Nankai bus line or the Semboku Rapid Railway. Mitami-jinja is mentioned in the Heian period chronicle Engishiki compiled in the early tenth century. The shrine buildings were destroyed by Oda Nobunaga's troops in 1577, but they were rebuilt in 1592 by Wada Dosan 和田道讃.

Kanō Tenman-gū (加納天満宮) is a Shinto shrine located in the city of Gifu, Gifu Prefecture, Japan. It was built as the shrine to protect Izumii Castle. As a Tenman-gū, it is dedicated to Tenjin, the deified form of Sugawara no Michizane. Additionally, Matsudaira Mitsushige, who first created Gifu Umbrellas, is also canonized on the shrine grounds. The shrine's festival is held on the third Saturday and Sunday of October each year.

Nagara Tenjin Shrine is a Shinto shrine located in the Nagara area of Gifu, Gifu Prefecture, Japan. It is a Tenman-gū dedicated to the worship of Sugawara no Michizane.

Egara Tenjin Shrine, is a Shinto shrine in Kamakura. Having been founded according to legend by an unknown priest in 1104, it is one of the few extant religious institutions in the area to predate the advent of Minamoto no Yoritomo, who arrived here in 1181. Like all other Tenjin shrines in Japan, it enshrines the spirit of famous scholar and politician Sugawara no Michizane under the name Tenjin. For this reason, the kami is believed to be a protector of intellectual pursuits.

Tenjin no Honji (天神の本地) is a Japanese otogi-zōshi in two scrolls, likely composed at the end of the Muromachi period.