Fazlı Teoman Yakupoğlu (born 20 November 1967) is a Turkish acoustic rock singer and songwriter. His biggest hits include "Paramparça" (All In Pieces), Senden Önce Senden Sonra (Before You, After You), 17 and Papatya (Daisy). On Papatya, Turkish female rock singer Özlem Tekin features as backing vocals. Şebnem Ferah has also featured on a couple of Teoman's tracks.

After studying business administration and mathematics at Bogazici University, he transferred to and graduated from the sociology department of the same university. He completed his graduate study on women studies at Istanbul University.

His formal music career was first started in his first band Mirage in 1986. Teoman staged with various bands for 10 years until his breakthrough song, "Ne Ekmek Ne de Su" (Neither Bread Nor Water) (music by Barlas Erinç- lyrics by Barlas Erinç and Teoman) which won the first prize in Roxy Müzik Günleri (Roxy Music Days). On August 4, 2011, he announced on his official website that he decided to quit music, indefinitely. Nevertheless, on November 24, 2012 Teoman officially announced his return to music. The same year he collaborated with Sebnem Ferah. In 2015 he released a new album "Eski Bir Ruya Ugruna" to great success. Teoman released official music video for "Limanında" in 2016, from his album named "Eski Bir Rüya Uğruna". In this music video, Teoman leans on Syrian dram through couple named Beriwan and Wassim, and their escape to Berlin, via Turkey.

Sami Harun Tekin is a Turkish singer, musician, and poet. He is one of the founding members and the vocalist of the Turkish rock band Mor ve Ötesi.

Koray Candemir is a Turkish musician, songwriter, and record producer. He used to be the lead singer of the Turkish rock band Kargo. Towards the end of 2008, Koray Candemir and Serkan Celikoz, has decided to end their involvement with Kargo, due to vision and opinion differences with the other members of Kargo. They have formed their new band which is named 'maSKott'. They are currently in Seattle working on their new projects and have plans to release a single and an album soon. Besides singing, Koray also plays the guitar in Kargo and maSKott. In addition to his musical work, he is known for his acting and charity work. 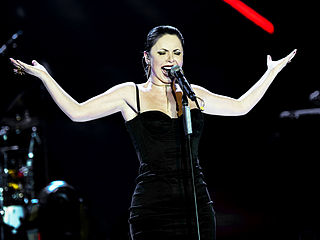 Şebnem Ferah is a Turkish singer, songwriter, composer, and guitarist. She was the lead vocalist of the all-female hard rock band Volvox until 1994, after which she went on to pursue an illustrious solo career. Her music style varies from pop rock to hard rock though her later albums have progressively incorporated more of the hard rock sound.

Tarkan Gözübüyük is the bass player of the Turkish heavy metal band Mezarkabul.

Candan Erçetin is a Turkish singer-songwriter. Over the twenty years of her singing career, she has been recognized for preparing and singing songs about human life. Despite the fact that she made her albums without much publicity, her work influenced other artists. Erçetin has released many music videos with different themes. Because her family originate from the Balkans, she has often used elements of Balkan music in her songs and works. In addition to Turkish, she has written songs in French and Greek.

Reşat Nuri Güntekin was a Turkish novelist, storywriter and playwright. His best known novel, Çalıkuşu is about the destiny of a young Turkish female teacher in Anatolia. This work is translated into Persian by Seyyed Borhan Ghandili. His other significant novels include Dudaktan Kalbe and Yaprak Dökümü. Many of his novels have been adapted to cinema and television. Because he visited Anatolia with his duty as an inspector, he knew Anatolian people closely. In his works he dealt with life and social problems in Anatolia; Reflects people in the human-environment relationship.

Funda Arar is a Turkish singer.

Burak Gürpınar is a Turkish drummer primarily known for his work with the influential Turkish rock band Kurban.

Hakan Altun is a Turkish singer, songwriter and instrumentalist.

Hüseyin Yalın, better known by his surname Yalın, is a Turkish pop singer and songwriter. He achieved success with the song "Zalim" in 2004.

Göksel Demirpençe is a Turkish singer-songwriter.

Ümit Besen represents the darker side of Tarabya school of electronic music. He started his professional career with playing keyboards and singing with his band at the local clubs in Adana, Southern Turkey. While he was in the army for his obligatory service a brigadier-general liked his style and appointed him with the task of singing at the officers tavern.

Barlas Erinç is a Turkish musician, rock singer and song writer. He was born in Ankara, Turkey. He studied Business Administration and is a graduate of Gazi University in Ankara. 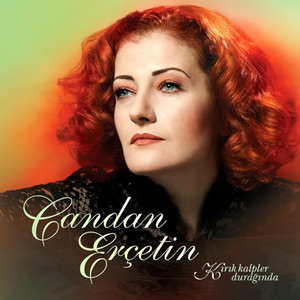 Kırık Kalpler Durağında is the sixth studio album by Turkish singer Candan Erçetin. It was released on 16 December 2009 by Pasaj Müzik. It was her second studio album released by this company, and her first major work since the 2004 release of Melek. The album features elements of pop music, folk music and hip hop. Candan Erçetin is the album's major songwriter, having written ten of its songs on her own. Out of these ten songs, six of them were composed by her as well. All of the songs were arranged by Alper Erinç.

Özlem Tekin is a Turkish singer and occasional actress, primarily known for her music. Though she started out in the hard rock genre, her music has progressed to incorporate different styles such as house, punk, pop and Turkish folk music.

Alişan Serkan Tektaş, better known as Alişan, is a Turkish singer and actor of Zaza descent.

The Bostancı Show Center is a convention center located on the Mehmet Şevki Paşa Road in Bostancı, Kadıköy, opened in 1991. It hosts many events and concerts.