Tersefanou (Greek : Τερσεφάνου) is a village in the Larnaca District of Cyprus, located 2 northwest of Kiti.

Cyprus, officially called the Republic of Cyprus, is an island country in the eastern Mediterranean Sea. It is the third largest and third most populous island in the Mediterranean and is located south of Turkey; west of Syria; northwest of the Gaza Strip, Israel, and Lebanon; north of Egypt; and southeast of Greece. The country's capital and largest city is Nicosia.

Limassol is a city on the southern coast of Cyprus and capital of the district with the same name. Limassol is the second largest urban area in Cyprus after Nicosia, with an urban population of 183,658 and a metropolitan population of 239,842. Limassol has been ranked by TripAdvisor as the 3rd up-and-coming destination in the world, in its Top 10 Traveler’s Choice Destinations on the Rise. The city is also ranked 89th worldwide in Mercer's Quality of Living Survey (2017). In the 2020 ranking published by the Globalization and World Cities Research Network, Limassol was classified as a "Gamma -" global city.

The Cyprus dispute, also known as the Cyprus conflict, Cyprus issue, Cyprus question or Cyprus problem, is an ongoing dispute between Greek Cypriots and Turkish Cypriots. Initially, with the occupation of the island by the British Empire from the Ottoman Empire in 1878 and subsequent annexation in 1914, the "Cyprus dispute" was a conflict between the Turkish and Greek islanders.

The music of Cyprus includes a variety of traditional, Western classical and Western popular genres. Cypriot traditional music is similar to the traditional music of Greece with Turkish and Arab influences, and includes dances like sousta, syrtos, ballos, tatsia, antikristos, arabiye, karotseris, sinalik, chiftetteli, zeimbekiko and the mandra dance.

APOEL FC is a Cypriot professional football club based in Nicosia, Cyprus. APOEL is the most popular and the most successful football team in Cyprus with an overall tally of 28 national championships, 21 cups, and 13 super cups.

Turkish Cypriots or Cypriot Turks are mostly ethnic Turks originating from Cyprus. Following the Ottoman conquest of the island in 1571, about 30,000 Turkish settlers were given land once they arrived in Cyprus. Additionally, many of the island's local Christians converted to Islam during the early years of Ottoman rule. Nonetheless, the influx of mainly Muslim settlers to Cyprus continued intermittently until the end of the Ottoman period. Today, while Northern Cyprus is home to a significant part of the Turkish Cypriot population, the majority of Turkish Cypriots live abroad, forming the Turkish Cypriot diaspora. This diaspora came into existence after the Ottoman Empire transferred the control of the island to the British Empire, as many Turkish Cypriots emigrated primarily to Turkey and the United Kingdom for political and economic reasons. 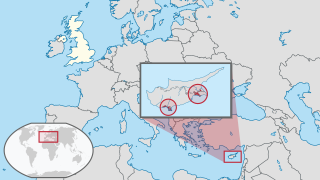 The Sovereign Base Areas of Akrotiri and Dhekelia (SBA) is a British Overseas Territory on the island of Cyprus. The areas, which include British military bases and installations, as well as other land, were retained by the British under the 1960 treaty of independence, signed by the United Kingdom, Greece, Turkey and representatives from the Greek and Turkish Cypriot communities, which granted independence to the Crown colony of Cyprus. The territory serves an important role as a station for signals intelligence and provides a vital strategic part of the United Kingdom surveillance gathering network in the Mediterranean and the Middle East.

Athlitiki Enosi Lemesou ' commonly known as AEL, is a Cypriot sports club based in the city of Limassol, most famous for its football team. 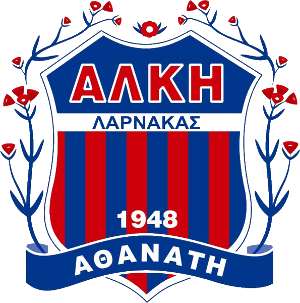 Alki Larnaca was a Cypriot football club based in the town of Larnaca. The club was founded in 1948 and the club's colours were blue and red. They reached the Cypriot Cup final on five occasions without a win.

Cyprus has participated in the Eurovision Song Contest 38 times since making its debut in 1981. Cyprus' first entry was the group Island, who finished sixth. The country's best result in the contest is a second-place finish with Eleni Foureira in 2018.

The Cypriot Super Cup is a Cypriot association football trophy, contested in an annual match between the Cypriot First Division Champion and the Cypriot Cup winners. If a team wins The Double, then the Double winner plays the Cypriot Cup finalist. The match is contested at the beginning of the football season, and for the last 20 years in Nicosia; also for the past few seasons, after the construction of the GSP Stadium in Nicosia, it has been played almost every year in that stadium. If the match is tied then the penalties shoot out follows. 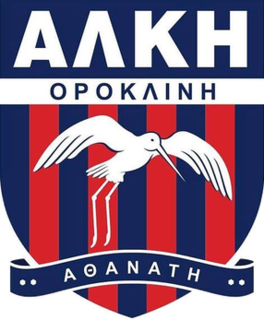 Alki Oroklini is a Cypriot football club based in Oroklini. The team was founded as Omonia Oroklinis in 1979. Omonia had one participation in the Fourth Division. In 2014 the team changed their name to Alki Oroklini, when business man Andy Loppas, who became the president of the team, renamed it to Alki as his favorite team was Alki Larnaca FC which was dissolved that year, due to financial problems. Alki managed the outstanding 3 promotions in 3 years from the fourth division to cypriot first division, the highest tier in cyprus.