Last updated August 24, 2021
Musically acceptable range for a singer or musical instrument
This article is about the musical term. For the arts enterprise software, see Tessitura (software).

In music, tessitura (Italian:  [tessiˈtuːra] , pl. tessiture, "texture"; English: /tɛsɪˈtjuːrə/ ) is the most acceptable and comfortable vocal range for a given singer or less frequently, musical instrument, the range in which a given type of voice presents its best-sounding (or characteristic) timbre. This broad definition is often interpreted to refer specifically to the pitch range that most frequently occurs within a given part of a musical piece. Hence, in musical notation, tessitura is the ambitus in which that particular vocal (or less often instrumental) part lies—whether high or low, etc.

However, the tessitura of a part or voice is not decided by the extremes of its range, but rather by which share of this total range is most used. Hence, it is referred to as the "heart" of a range. [1] For example, throughout the entirety of Wagner's Ring , the music written for the tenor role of Siegfried ranges from C♯3 to C5, but the tessitura is described as high because the phrases are most often in the range of C4 to A4.

Furthermore, the tessitura concept addresses not merely a range of pitches but also the arrangement of those pitches. The particular melodic contour of a singer's part may also be considered to be an important aspect of his vocal tessitura. Tessitura considerations include these factors: proportion of sudden or gradual rises and falls in pitch—speed of pitch changes; the relative number of very high or low notes; whether lines and phrases of music in the piece tend to rise or fall—the muscular abilities of a singer may be more suited to one or the other direction. A singer's ideal tessitura is centered on the single pitch in which their dynamic range is greatest. [2]

The extension to the more particular "weaving" of a voice has led to a commixture of tessitura and voice type. For example, the volume (loudness) that a singer is able to maintain for dramatic effect will often influence which Fach (voice type) or tessitura they specialize in. For example, a lyric tenor may have the vocal range to sing Wagner or other dramatic roles, but to maintain the loudness required for dramatic intensity over the span of an opera performance could either inflict vocal damage or be beyond his ability.

A melody, also tune, voice or line, is a linear succession of musical tones that the listener perceives as a single entity. In its most literal sense, a melody is a combination of pitch and rhythm, while more figuratively, the term can include successions of other musical elements such as tonal color. It is the foreground to the background accompaniment. A line or part need not be a foreground melody.

A clef is a musical symbol used to indicate which notes are represented by the lines and spaces on a musical stave. When a clef is placed on a staff it assigns a particular pitch to one of the five lines, which in turn gives pitch value to the remaining lines and spaces.

A soprano ([soˈpraːno]) is a type of classical female singing voice and has the highest vocal range of all voice types. The soprano's vocal range (using scientific pitch notation) is from approximately middle C (C4) = 261 Hz to "high A" (A5) = 880 Hz in choral music, or to "soprano C" (C6, two octaves above middle C) = 1046 Hz or higher in operatic music. In four-part chorale style harmony, the soprano takes the highest part, which often encompasses the melody. The soprano voice type is generally divided into the coloratura, soubrette, lyric, spinto, and dramatic soprano.

A tenor is a type of classical male singing voice whose vocal range lies between the countertenor and baritone voice types. It is one of the highest of the male voice types. The tenor's vocal range extends up to C5. The low extreme for tenors is widely defined to be B2, though some roles include an A♭2 (two A♭s below middle C). At the highest extreme, some tenors can sing up to the second F above middle C (F5). The tenor voice type is generally divided into the leggero tenor, lyric tenor, spinto tenor, dramatic tenor, heldentenor, and tenor buffo or spieltenor.

Carnatic music, known as Karnāṭaka saṃgīta or Karnāṭaka saṅgītam in the South Indian languages, is a system of music commonly associated with South India, including the modern Indian states of Karnataka, Andhra Pradesh, Telangana, Kerala and Tamil Nadu, and Sri Lanka. It is one of two main subgenres of Indian classical music that evolved from ancient Sanatana dharma sciences and traditions, particularly the Samaveda. The other subgenre being Hindustani music, which emerged as a distinct form because of Persian or Islamic influences from Northern India. The main emphasis in Carnatic music is on vocal music; most compositions are written to be sung, and even when played on instruments, they are meant to be performed in gāyaki (singing) style. The heptatonic scale of Western musical notation is said to have its origins in Carnatic music, having been picked up by Pythagoras during his visit to India to learn mathematics, thus introducing it to the west. The circle of fifths and several other popular concepts in western classical music have their origins in the theory of Carnatic classical music.

Head voice is a term used within vocal music. The use of this term varies widely within vocal pedagogical circles and there is currently no one consistent opinion among vocal music professionals in regard to this term. Head voice can be used in relation to the following:

Vocal range is the range of pitches that a human voice can phonate. Its most common application is within the context of singing, where it is used as a defining characteristic for classifying singing voices into voice types. It is also a topic of study within linguistics, phonetics, and speech-language pathology, particularly in relation to the study of tonal languages and certain types of vocal disorders, although it has little practical application in terms of speech. 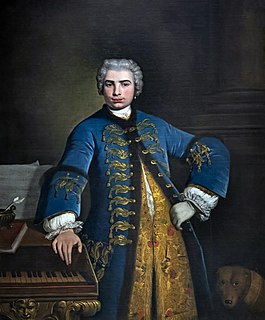 Coloratura is an elaborate melody with runs, trills, wide leaps, or similar virtuoso-like material, or a passage of such music. Operatic roles in which such music plays a prominent part, and singers of these roles, are also called coloratura. Its instrumental equivalent is ornamentation.

A money note is a music industry slang term which refers to a part of a live or recorded singing performance which is subjectively judged to be very dramatic or emotionally stirring. Created from a confluence of composition or improvisational and performance quality, this is usually at a climactic point of a song or aria, in which the singer's melody makes a large interval jump to the song's highest note or falls to its lowest note. In some cases, a section or phrase of a vocal melody may captivate the listener's interest because of the tone quality of the singing-either because of the strident emotionalism, or due to the quiet sensitivity of the voice. As well, a "money note" might be an impressive vocal display or a note which is held for a long time with clear pitch and expressive vibrato.

In vocal music, the term voce faringea describes a historical singing practice developed and used especially by the bel canto tenors of the late eighteenth and early nineteenth century to extend the upper range of the voice by modifying the falsetto, which is typically heard as a weak or feminine sound, into a vocal quality that is more tenoral and powerful.