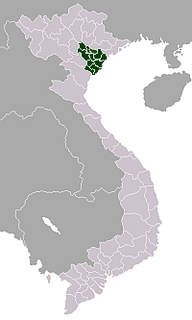 The Red River Delta is the flat low-lying plain formed by the Red River and its distributaries merging with the Thái Binh River in northern Vietnam. The delta has the smallest area but highest population and population density of all regions. The region measuring some 15,000 square km is well protected by a network of dikes. It is an agriculturally rich area and densely populated. Most of the land is devoted to rice cultivation.

Thái Bình river starts in the area of Đồng Phúc commune, Yên Dũng District, Bắc Giang Province - where Thuong River and Cầu River join with each other. It then flows to Hải Dương Province and becomes the boundary between Bắc Giang and Hải Dương . After flowing through the area of Hải Dương, it enters Thái Bình Province and flows to the South China Sea at Ba Lat river mouth.

Đồng Phúc is a commune (xã) and village in Yên Dũng District, Bắc Giang Province, which is part of northeastern Vietnam.

Yên Dũng is a rural district of Bắc Giang Province in the Northeast region of Vietnam. As of 2003 the district had a population of 162,497. The district covers an area of 213 km². The district capital lies at Neo. The district is divided into two townships, Neo (capital), and Tân Dân and communes: 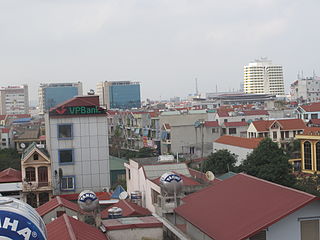 Hải Dương is a city in Vietnam. It is the capital of Hải Dương, a highly industrialized province in the Hanoi Metropolitan Area and the Red River Delta in Northern Vietnam. Its name is Sino-Vietnamese for "ocean sun" (海陽). The city is at the midpoint between the capital Hà Nội and major port Hải Phòng, and is part of the Northern Key Economic Zone. As of 2016, the city has a population of 403,893.

The Anarchy of the 12 Warlords, also the Period of the 12 Warlords, was a period of chaos and civil war in the history of Vietnam, from 966 to 968 during the Ngô Dynasty, due to a conflict of succession after the death of King Ngô Quyền. This period is also sometimes simply called the Twelve Warlords.

Bình Giang is a rural district (huyện) of Hải Dương Province in the Red River Delta region of Vietnam. As of 2003 the district had a population of 106,689. The district covers an area of 105 km². The district capital lies at Kẻ Sặt.

Tan Thanh can refer to many populated places in Vietnam such as:

Vietnam Inland Waterways Administration is the government agency of the Ministry of Transport that governs and maintains the ports, rivers, canals and navigable lakes of Vietnam. The current General Director is Assistant Professor D., People's Teacher Trần Đắc Sửu; VIWA is located in Ha Noi.

Commune, a type of third tier subdivision of Vietnam is divided into 11,162 units along with ward and township have equal status.

An Lac or An Lạc in Vietnamese may refer to: