Mediumship with the spirit of Thánh Trần is part of votive dance lên đồng mediumship and particularly associated with Đạo Mẫu (道母), mother goddess worship. [1] Mediums are mainly female, possession of a male by the spirit is viewed as unusual. [2] 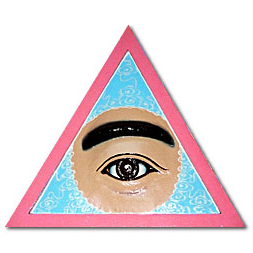 Caodaism is a monotheistic syncretic religion officially established in the city of Tây Ninh in southern Vietnam in 1926. The full name of the religion is Đại Đạo Tam Kỳ Phổ Độ.

In Shinto, a miko (巫女) is a shrine maiden or a supplementary priestess. Miko were once likely seen as a shaman but are understood in modern Japanese culture to be an institutionalized role in daily shrine life, trained to perform tasks, ranging from sacred cleansing to performing the sacred Kagura dance.

Trần Hưng Đạo, also known as Grand Prince Hưng Đạo, was an imperial prince, statesman and military commander of Đại Việt military forces during the Trần Dynasty. Trần commanded the Đại Việt armies that repelled two out of three major Mongol invasions in the 13th century. His multiple victories over the Yuan Dynasty under Kublai Khan are considered among the greatest military feats in Vietnamese history.

Vietnamese personal names generally consist of three parts: one patrilineal family name, one or more middle name(s), and one given name, used in that order. The "family name first" order follows the system of Chinese names and is common throughout the Chinese cultural sphere. However, it is different from Chinese, Korean, and Japanese names in the usage of "middle names", as they are less common in China and Korea and do not exist in Japan. Persons can be referred to by the whole name, the given name or a hierarchic pronoun, which usually connotes a degree of family relationship or kinship, in normal usage.

Hộ PhápPhạm Công Tắc (1890–1959), was one of the most important leaders in the establishment, construction, development and consolidation of the system of the Cao Đài religion. This religion was founded in 1926. 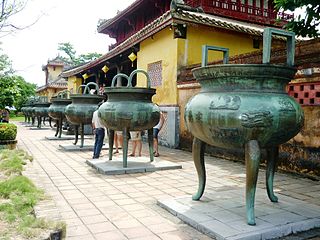 Lên đồng is a ritual practiced in Vietnamese folk religion and the mother goddess religion Đạo Mẫu, in which followers become spirit mediums for various deities. Also known as hầu bóng, hầu đồng, or đồng bóng, sessions involve a number of artistic elements, such as music, singing, dance and the use of costumes. The invocation songs used to induce a trance in mediums have been described as a "particularly noteworthy expression of the performing art of the Kinh people"; the lên đồng ritual itself is considered to be an element of Vietnam's intangible cultural heritage.

Thiên Y A Na is a Vietnamese goddess. She is worshipped in the Vietnamese folk religion and Đạo Mẫu, the mother goddess religion. She is also known as Lady Po Nagar, the Cham deity from whom she originated. The Cham people of Vietnam had been much influenced by India, and it is believed that Pô Nagar is represented with the characteristics of Bhagavati Uma. The cult of Thiên Y A Na is popular in Vietnam, particularly among women. She is channeled through Lên đồng rituals. There have been many temples and shrines devoted to her throughout the last several centuries.

Trần Quốc Tảng was the third son of Trần Hưng Đạo. He was a general of the Trần Dynasty during the reign of emperors Trần Nhân Tông and Trần Anh Tông who was also his son-in-law. As a member of Yên Sinh's line in Trần clan, Trần Quốc Tảng supported the plot of taking over the throne from Trần Cảnh's line which was opposed by his father Trần Quốc Tuấn and his elder brother Trần Quốc Nghiễn, this difference made Hưng Đạo break off the paternal relation with Trần Quốc Tảng until his death in 1300.

Tô Hiến Thành was an official in the royal court of Lý Anh Tông and Lý Cao Tông, the sixth and seventh emperors of the Lý Dynasty. Being a capable official of Lý Anh Tông who helped the emperor in civil and military matters, Tô Hiến Thành was chosen by Lý Anh Tông for the regentship of his son Lý Long Trát. He was granted the title Prince and thus became the only possessor of the title who did not come from the Lý royal family. The achievements and loyalty of Tô Hiến Thành to the infant emperor Lý Cao Tông made him a highly praised figure in the history of Vietnam. Today, Tô Hiến Thành is considered one of the most prominent mandarins in the dynastic time of Vietnam. 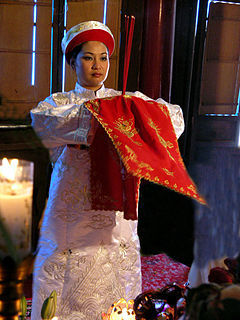 Đạo Mẫu is the worship of mother goddesses shakti in Vietnam. While scholars like Ngô Đức Thịnh propose that it represents a systematic mother goddess, Đạo Mẫu draws together fairly disparate beliefs and practices. These include the worship of goddesses such as Thiên Y A Na, The Lady of the Realm, The Lady of the Storehouse and Princess Liễu Hạnh, legendary figures like Âu Cơ, the Trưng Sisters, and Lady Triệu, as well as the cult of the Four Palaces. Đạo Mẫu is commonly associated with spirit mediumship rituals—known in Vietnam as lên đồng—much as practiced in other parts of Asia, such as Southern China, Myanmar and some community in India... Although the Communist government had initially proscribed the practice of such rituals, deeming them to be superstitions, they relented in 1987, once again legalizing their practice.

Mẫu Thượng Thiên (上天) is one of the four heavenly mothers in the Four Palaces in Vietnamese folk religion. She is one of the spirits invoked in the form of lên đồng mediumship particularly associated with Đạo Mẫu worship.