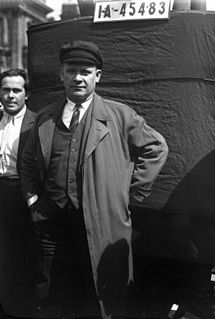 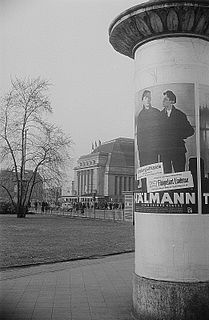 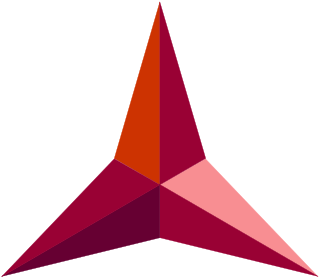 The International Brigades were paramilitary units set up by the Communist International to assist the Popular Front government of the Second Spanish Republic during the Spanish Civil War. The organisation existed for two years, from 1936 until 1938. It is estimated that during the entire war, between 32,000 and 35,000 members served in the International Brigades, including 15,000 who died in combat; however, there were never more than 20,000 brigade members present on the front line at one time. 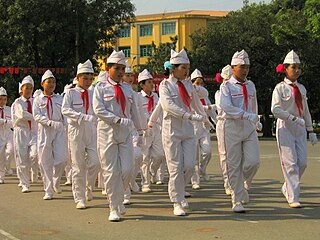 The Friedrichsfelde Central Cemetery, also known as the Memorial to the Socialists, is a cemetery in the borough of Lichtenberg in Berlin. When the cemetery was founded in 1881 it was called the Freidrichsfelde Municipal Cemetery Berlin. In 1919, with the burial of Wilhelm Liebknecht, founder of the Social Democratic Party (SPD), the cemetery became the resting place for many of the leaders and activists of Germany's social democratic, socialist and communist movements. In 1919, Karl Liebknecht and Rosa Luxemburg, co-founders of the Communist Party of Germany, were buried there. The division of Berlin following the Second World War caused the cemetery to be within the borders of East Berlin, where it was used to bury East German (GDR) leaders, such as Walter Ulbricht and Wilhelm Pieck, the first President of the GDR. 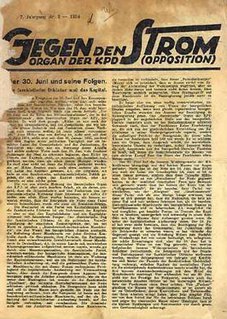 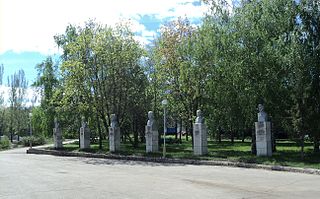 Young Pioneer camp was the name for the vacation or summer camp of Young Pioneers. In the 20th century these camps existed in many socialist countries, particularly in the Soviet Union. 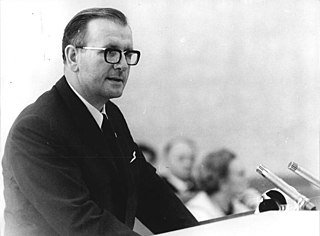 Unsere Heimat was a popular song in the German Democratic Republic, where it was sung by the Ernst Thälmann Pioneer Organisation. The lyrics were written by Herbert Keller and the melody by Hans Naumilkat. The song demonstrates strong bonds with nature, expressing the significance of a sense of homeland (heimat) beyond people. 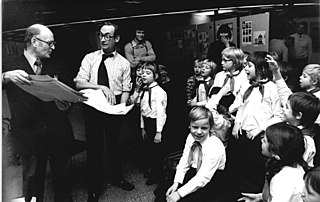 The Wittorf affair was an embezzlement scandal in Germany in 1928. John Wittorf, an official of the Communist Party (KPD), was a close friend and protégé of party chairman Ernst Thälmann. Thälmann tried to cover up the embezzlement, for which he was ousted from the central committee. Joseph Stalin intervened and had Thälmann reinstated, signaling the beginning of a purge and completing the Stalinization of the KPD.

Ernst Thälmann was the leader of the Communist Party of Germany (KPD) during much of the Weimar Republic. 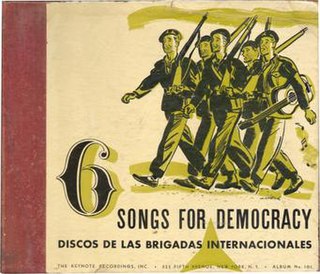 "Freiheit", also known as "Spaniens Himmel" or "Die Thälmann-Kolonne", is a song written in 1936 by Gudrun Kabisch and Paul Dessau, German anti-fascists. The song was written for the International Brigades but later became a popular standard in Germany and in American communist and folk music communities. The title translates as "Freedom" in English.

Ernst Schneller was a German school teacher. In 1914 he volunteered to join the army when war broke out. Sent to fight on the Eastern Front, he became politicised and radicalised, especially as the ideas behind the Russian Revolution filtered through to the German troops. After the war he joined first the Social Democratic Party and then, in 1920, the recently launched Communist Party of Germany. He served as a regional member ("Landtagsabgeordneter") of parliament in the Saxon parliament ("Landtag") between 1921 and 1924, and then between 1924 and 1933 as a member ("Reichstagsabgeordneter") of the national parliament ("Reichstag"). He was arrested in 1933 and imprisoned. Transfer to the Sachsenhausen concentration camp followed in 1939.