Théâtre Espace Go (commonly known as Espace Go, French for "Go Space") is a theatre in Montreal, Quebec, Canada. Founded in 1985 as the feminist Théâtre Expérimental des Femmes, the company changed its name to Théâtre Espace Go in 1994 and broadened its mandate. [1] [2]

In 1988, it received the Grand Prix from the Conseil des arts de Montréal for its contributions to the city's culture. In 1991, it was honoured with a special prize from the Association Québécoise des Critiques de Théâtre. [1]

In 1995, Espace Go moved to a new $5,000,000 complex on Saint Laurent Boulevard. [1] Architect Éric Gauthier received the Prix d'Excellence from the Ordre des architectes du Québec for the building, which was formally inaugurated on March 9, 1995. The initial production in the new space was Philippe Minyana's Inventaires, directed by Louise Laprade, [2] who was one of the co-founders of the Théâtre Expérimental des Femmes. [3]

Marcel Dubé was a Canadian playwright. He produced over 300 works for radio, television, and stage. During his career he promoted the preservation and sanctity of the French language in Quebec. 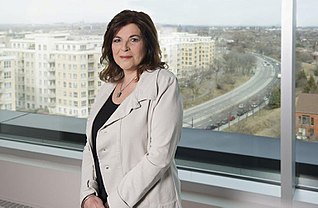 Diane Lemieux is a politician, feminist and Quebec administrator.

Paule Baillargeon is a Canadian actress and film director. She won the Genie Award for Best Supporting Actress for her role in the film I've Heard the Mermaids Singing, and was a nominee for Best Director for The Sex of the Stars . Her film roles have included August 32nd on Earth , Jesus of Montreal , A Woman in Transit , Réjeanne Padovani and Days of Darkness .

Louise Bédard is a Canadian dancer, choreographer and teacher who is active on the contemporary dance.

Françoise Bertrand, is a Canadian business personality. She is the first woman to head a North American television network, as CEO and president of Télé-Québec, and the first woman to serve as chairperson of the Canadian Radio-television and Telecommunications Commission (CRTC), a position she held from 1996 to 2001. Bertrand was inducted into the National Order of Quebec in 2008 and appointed an Officer of the Order of Canada in 2013. She has served as president and CEO of Fédération des chambres de commerce du Québec from 2003 to 2016, the first woman to hold the position. She is currently the first woman to serve as Chairperson of the Board of Directors of Via Rail Canada Inc., a position she has held since April 2017.

Claudine Bertrand is a Quebec educator and poet.

Lise Vaillancourt is a Quebec writer.

Louise Dupré is a Quebec poet and novelist.

France Théoret is a Canadian feminist, author, poet, and teacher.

Hélène Pedneault was a Québécoise writer of many mediums who contributed much to the advancement of the feminist cause and also to Quebec sovereignty and the environment.

Québec Cinéma presents an annual award for Best Actress to recognize the best in the Cinema of Quebec.

Québec Cinéma presents an annual award for Best Supporting Actor to recognize the best in the Cinema of Quebec.

Québec Cinéma presents an annual award for Best Director to recognize the best in the Cinema of Quebec.

Atelier TAG is a Canadian architecture firm based in Montreal, Quebec that specializes in architecture, interior design and urban design. The firm was founded in 1997 by McGill School of Architecture graduates Manon Asselin and Katsuhiro Yamazaki, and its name is in reference to the interdisciplinary matter of the practice, with "TAG" being an acronym for “technique + architecture + graphism”.

The Prix Iris for Best Animated Short Film is an annual film award presented by Québec Cinéma as part of its Prix Iris program, to honour the year's best animated short film made within the cinema of Quebec.