Théâtre Hébertot (French pronunciation: ​ [teɑtʁ ebɛʁto] ) is a theatre at 78, boulevard des Batignolles, in the 17th arrondissement of Paris, France. The theatre, completed in 1838 and opening as the Théâtre des Batignolles, was later renamed Théâtre des Arts in 1907. It acquired its present name in 1940 after playwright and journalist Jacques Hébertot.

Théâtre Hébertot has a seating capacity of 630 for the main stage, and completed construction on a smaller stage, l'Petit Hébertot, in 2001. The Hebertot is one of the few Paris theaters that has shows in English as well as French.

Danièle and Pierre Franck are its current directors. 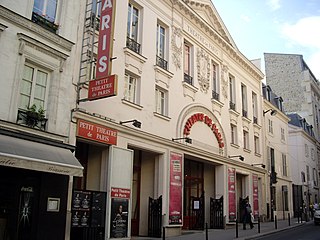 Paulette Pax was a French actress, theatre director and scenographe.

Jacques Hébertot was the pseudonym of André Daviel. He was a French theater director, poet, journalist and publisher. The Théâtre Hébertot in Paris has been named after him since 1940.