On 22 December 1912, Aurélien Lugné-Poe premiered there the play The Annunciation of Marie by Paul Claudel with the company of the Théâtre de l'Œuvre.

Malakoff is a city in Henderson County, Texas, United States. The population was 2,324 at the 2010 census. The city is named after a Russian fort of Malakoff, which played a pivotal role during the siege of Sevastopol during the Crimean War. 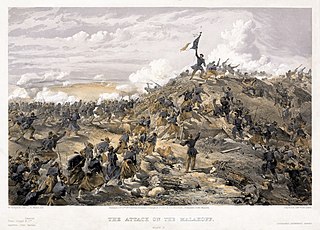 The Battle of Malakoff was a French attack against Russian forces on the Malakoff redoubt and its subsequent capture on 8 September 1855 as a part of the siege of Sevastopol during the Crimean War. The French army under General MacMahon successfully stormed the Malakoff redoubt, while a simultaneous British attack on the Redan to the south of the Malakoff was repulsed. In one of the war's defining moments, the French zouave Eugène Libaut raised the French flag on the top of the Russian redoubt. The Battle of Malakoff resulted in the fall of Sevastopol on 9 September, bringing the 11-month siege to an end.

The Odéon-Théâtre de l'Europe is one of France's six national theatres. It is located at 2 rue Corneille in the 6th arrondissement of Paris on the left bank of the Seine, next to the Luxembourg Garden and the Luxembourg Palace, which houses the Senate.

Malakoff is a suburban commune in the Hauts-de-Seine department southwest of Paris, France. Located 5 km (3.1 mi) from the centre of the city, it had a population of 30,286 in 2016. The European Organisation for Civil Aviation Equipment (EUROCAE) is based in Malakoff.

Vanves is a commune in the southwestern suburbs of Paris, France. It is located 5.6 km (3.5 mi) from the centre of Paris. It is one of the most densely populated municipalities in Europe and the tenth in France 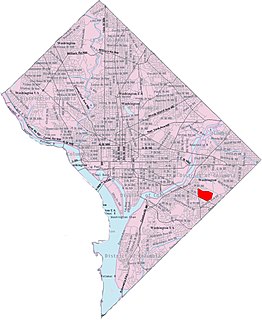 Penn Branch is a neighborhood in Southeast Washington, D.C., east of the Anacostia River. It is bounded by Pennsylvania Avenue SE to the south; Pope Branch Park and Pope Creek to the north; Branch Avenue to the west; and Fort Davis Park to the east. ‘Penn Branch’, takes its name from its location at the intersection of two major thoroughfares, Pennsylvania and Branch Avenue. 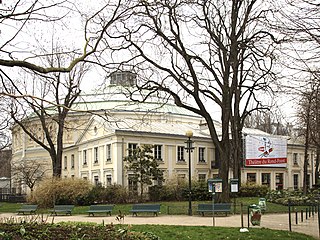 The Avenue de la Grande Armée is an avenue in Paris, France, marking the boundary between its 16th and 17th arrondissements. It was formerly named Avenue de la Porte Maillot as part of Route nationale 13, but was renamed to its present name in 1864 in honour of the Grande Armée of the Napoleonic Wars.

The Avenue de Malakoff is a street in the 16th arrondissement of Paris. It was given its present name in 1854, the year in which French troops captured the Malakhov Tower during the Crimean War, leading to the subsequent capture of nearby Sevastopol the following year.

The Avenue Hoche is an avenue in the 8th arrondissement of Paris, France.

The canton of Montrouge is a French administrative division, located in the arrondissement of Antony, in the Hauts-de-Seine département. Its borders were modified at the French canton reorganisation which came into effect in March 2015. Its seat is in Montrouge.

The concours de façades de la ville de Paris was an architecture competition organized by the city of Paris at the very end of the 19th century.

The Théâtre des Folies-Wagram was a theatre in Paris which operated from 1928 until 1964. From late 1935 it was known as the Théâtre de l'Étoile. Located at 35 Avenue de Wagram in the 17th arrondissement, the theatre saw the premieres of numerous French operettas as well as Antonin Artaud's play Les Cenci. It had no connection to another theatre also known as the Théâtre de l'Étoile which was located on the Champs-Élysées and operated from 1923 to 1926. 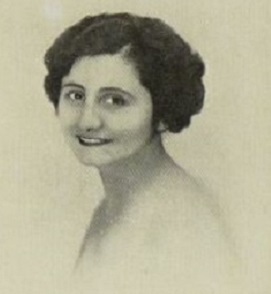 Union Sportive Municipale de Malakoff is a football team located in Malakoff, France. It is the football section of the parent multi-sport club USM Malakoff. The team plays in the Départemental 3, the eleventh tier of French football. The club's colours are blue and red.