The théâtre de Gennevilliers is a French national dramatic center inaugurated on 22 January 1983, 19 years after the arrival of Bernard Sobel at Gennevilliers in the Hauts-de-Seine departement.

In 2007, Bernard Sobel is succeeded by Pascal Rambert as director of the place. 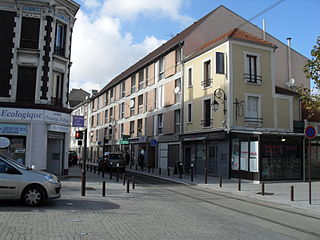 Gennevilliers is a commune in the northwestern suburbs of Paris, in the Hauts-de-Seine department of Île-de-France. It is located 9.1 km (5.7 mi) from the centre of Paris. In 2017, it had a population of 46,907. 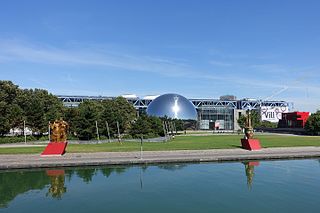 The Parc de la Villette is the third-largest park in Paris, 55.5 hectares in area, located at the northeastern edge of the city in the 19th arrondissement. The park houses one of the largest concentrations of cultural venues in Paris, including the Cité des Sciences et de l'Industrie, three major concert venues, and the prestigious Conservatoire de Paris. 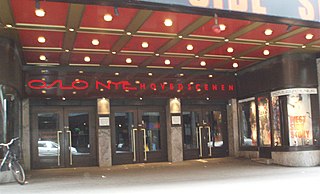 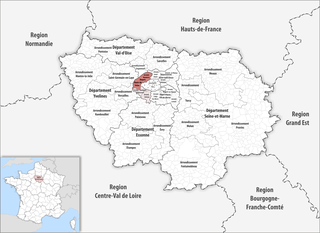 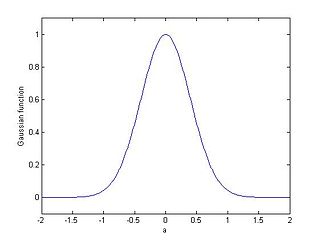 The Gabor transform, named after Dennis Gabor, is a special case of the short-time Fourier transform. It is used to determine the sinusoidal frequency and phase content of local sections of a signal as it changes over time. The function to be transformed is first multiplied by a Gaussian function, which can be regarded as a window function, and the resulting function is then transformed with a Fourier transform to derive the time-frequency analysis. The window function means that the signal near the time being analyzed will have higher weight. The Gabor transform of a signal x(t) is defined by this formula: 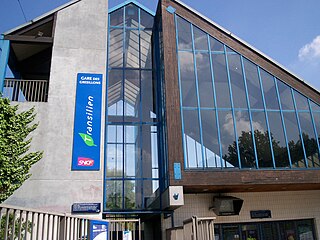 Les Grésillons is a station in Paris' express suburban rail system, the RER. It is situated in Gennevilliers, in the département of Hauts-de-Seine, and close to the industrial zone of the Caboeufs.

Bernard Sobel (1887–1964) was an American playwright, a drama critic for the New York Daily Mirror, an author of a number of books on theatre and theatre history, and a publicist.

Gennevilliers is a station in Paris's express suburban rail system, the RER. It is situated in Gennevilliers, in the département of Hauts-de-Seine. 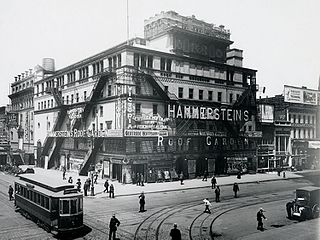 The Victoria Theatre (1899–1915) was a prominent American vaudeville house during the early years of the twentieth century. Theatre mogul Oscar Hammerstein I opened it in 1899 on the northwest corner of Seventh Avenue and 42nd Street, along New York City’s Longacre Square. The theatre was closely associated with the Paradise Roof Garden above it, and the two venues came to be known collectively as Hammerstein’s. 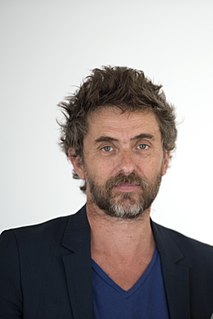 Le Pain dur is a three-act theatre play by French author Paul Claudel, published in 1918 and the second play of La Trilogie des Coûfontaine. The play was performed in Switzerland and Canada by Ludmilla Pitoëff between 1941 and 1943.

The canton of Gennevilliers is an administrative division of the Hauts-de-Seine department, in northern France. It was created at the French canton reorganisation which came into effect in March 2015. Its seat is in Gennevilliers. 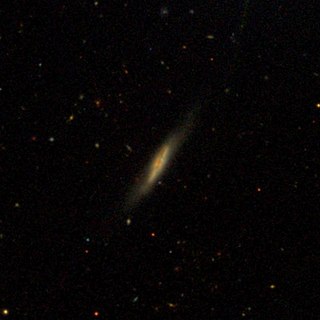 NGC 3008 is a lenticular galaxy with an active galactic nucleus in the constellation of Ursa Major, discovered by William Parsons and his assistants. It is about 40 thousand light years across, and with a recessional velocity of about 4,785 kilometers per second, is at a distance of 240 million light-years from the Sun.