Théâtre de Neptune was performed at Port Royal as the first theatrical production in North America. Marc Lescarbot (c. 1570–1641) wrote the play and is best known for his Histoire de la Nouvelle-France (1609), based on his expedition to Acadia (1606–1607) and research into French exploration.

Marc Lescarbot was a French author, poet and lawyer. He is best known for his Histoire de la Nouvelle-France (1609), based on his expedition to Acadia (1606–1607) and research into French exploration in North America. Considered one of the first great books in the history of Canada, it was printed in three editions, and was translated into German. Lescarbot also wrote numerous poems. His dramatic poem Théâtre de Neptune was performed at Port Royal as what the French claim was the first European theatrical production in North America outside of New Spain. Bernardino de Sahagún, and other 16th-century Spanish friars in Mexico, created several theatrical productions, such as Autos Sacramentales.

New France was the area colonized by France in North America during a period beginning with the exploration of the Gulf of Saint Lawrence by Jacques Cartier in 1534 and ending with the cession of New France to Great Britain and Spain in 1763 under the Treaty of Paris (1763).

Le Theatre de Neptune was performed in the harbor outside the French settlement of Port Royal on November 14, 1606. He published the play in 1609. The script attempts to prove the promise of New France. The play is a series of four welcoming speeches by Mi'kmaq chiefs. Each accepts the sovereignty of the French, unmistakably and unreservedly. These natives proclaim allegiance to the French monarch in their own territory, and that fact presses a question of the authenticity of the scripted representation. There are also welcoming remarks by Neptune and his court of six Tritons, followed by a banquet. [1]

Hal Theriault performed The Landing, A Pageant, a staged reading at “The Re-enactment of de Mons Landing at Port Royal,” July 16, 2005. In 2006, on the 400th anniversary of the first performance, a revival was planned by the Atlantic Fringe, but the performance was cancelled due to lack of CAC funding, as well as controversy over the perceived imperialist messages of the play. A "radical deconstruction" entitled Sinking Neptune" was performed as part of the 2006 Montreal Infringement Festival, despite cancellation of the event it protested.

The play is the namesake of Neptune Theatre (Halifax)

The Neptune Theatre is the largest professional theatre company in Atlantic Canada with a capacity of 458 and is located in downtown Halifax, Nova Scotia, Canada. It performs a mixture of new and classical plays. It is named after the play Théâtre de Neptune, which was performed at Port Royal, Nova Scotia as the first theatrical production in North America.

This article presents lists of the literary events and publications in 1606.

The Epstein Theatre, built in 1913, is one of many theatres in Liverpool, England. It has been threatened with closure several times, but reopened in May 2012 after a £1.2m refurbishment. It has now been renamed the Epstein Theatre, in honour of Brian Epstein, the manager of The Beatles. The theatre seats 380 on its two levels.

This section of the timeline of New France history concerns the events between Jacques Cartier's first voyage and the foundation of the Quebec settlement by Samuel de Champlain.

Jean Raoul Robert Rochefort was a French stage and screen actor. He received many accolades, including an Honorary César in 1999, during his career.

Henri Membertou was the sakmow of the Mi'kmaq First Nations tribe situated near Port Royal, site of the first French settlement in Acadia, present-day Nova Scotia, Canada. Originally sakmow of the Kespukwitk district, he was appointed as Grand Chief by the sakmowk of the other six districts. He was born 1507 Mi 'Kmaq Nation Acadia. However, Membertou claimed to be a grown man when he first met Jacques Cartier, which would mean that he was probably born in the early years of the sixteenth century. 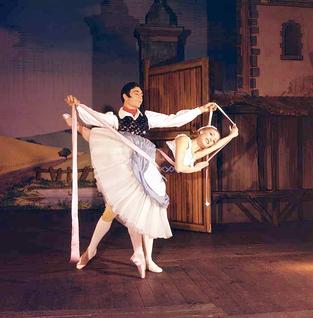 The Order of Good Cheer was originally a French Colonial order founded by suggestion of Samuel de Champlain upon arrival in New France, present day Canada. The Order of Good Cheer was founded at Port-Royal, Nova Scotia and was originally chartered under the Royal auspices of the Jean de Biencourt de Poutrincourt et de Saint-Just and Pierre Dugua, Sieur de Mons. The Order's practices were established by the first Chief Steward Marc Lescarbot.

HMCS Alberni was a Flower-class corvette that served in the Royal Canadian Navy (RCN) during the Second World War. She served in several theatres of the war. She was sunk in 1944.

Paquita is a ballet in two acts and three scenes originally choreographed by Joseph Mazilier to music by Édouard Deldevez and Ludwig Minkus.

Jason C. McLean is a Montreal-based writer, journalist, actor, theatre activist and a co-founder of the Forget the Box Media Collective where he currently serves as the Editor-in-Chief of the group's principal site ForgetTheBox.net.

Donovan King is a professional actor, teacher, historian, and tour guide from Montreal, Quebec. As the founder of Haunted Montreal, a company that researches ghost stories and offers haunted tours, King hires professional actors to lead the tours and publishes a new ghost story every month on the Haunted Montreal Blog. King is also a performance activist and experimental theatre artist who juggles acting, teaching, directing, dramaturgy, and theory to create dramatic projects that challenge systemic oppression. Known for his commitment to education and community, King assisted with the establishment of the Montreal Fringe Festival in 1991, is the author of Doing Theatre in Montreal and he set up the Montreal Infringement Festival in 2004.

Les élémens, or Ballet des élémens, is an opéra-ballet by the French composers André Cardinal Destouches and Michel Richard Delalande. It has a prologue and four entrées. The libretto was written by Pierre-Charles Roy.

The Lake Lescarbot is located in the La Tuque, in Mauricie, in Quebec, in Canada. The territory is administered by Zec Kiskissink.

Harriette Taber Richardson (1875—1951) was involved in the rebuilding of the Habitation at Port-Royal. Richardson started the reconstruction of Port-Royal after a visit to the destroyed site in 1923. She was named one of the Persons of National Historic Significance of Canada in 1949.