The Théâtre de Verdure de Nice is an outdoor theater located in Nice, France, which was built in 1946 by architect François Aragon. It has a capacity of 1,850 seated or 3,200 standing. Notable artists that have performed at the venue include Dalida, A-ha, Prince & the Revolution, R.E.M., Iron Maiden, Santana, Metallica, Joe Satriani, AC/DC, Elton John, Frank Zappa and Judas Priest. [1]

Cimiez is an upper class neighborhood in Nice, southern France. The area contains the Musée Matisse and the ruins of Cemenelum, capital of the Ancient Roman province Alpes Maritimae on the Ligurian coast. Cemenelum was an important rival of Nice, continuing to exist as a separate city till the time of the Lombard invasions. The ruins include an arena, amphitheater, thermal baths, and paleochristian basilica.

The Musée des Beaux-Arts de Nice in Nice, France at 33 av. des Baumettes was built in the former private mansion built in 1878 by the Russian Princess, Elizaveta Vasilievna Kochubey. Named for the artist Jules Chéret who lived and worked in Nice during his final years, the museum opened as the "Palais des Arts Jules Chéret" on 7 January 1928.

"America" is a song by Prince and The Revolution. It was the final US single from the group's 1985 album, Around the World in a Day. 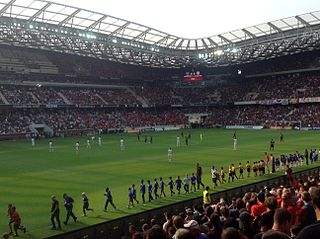 Allianz Riviera is a multi-use stadium in Nice, France, used mostly for football matches of host OGC Nice and also for occasional home matches of rugby union club Toulon. The stadium has a capacity of 36,178 people and replaces the city's former stadium Stade Municipal du Ray. Construction started in 2011 and was completed two years later. The stadium's opening was on 22 September 2013, for a match between OGC Nice and Valenciennes.

The University of Nice Sophia Antipolis was a university located in Nice, France and neighboring areas. It was founded in 1965 and was organized in eight faculties, two autonomous institutes and an engineering school. It was merged in 2019 into the Côte d'Azur University.

The County of Nice is a historical region of France located around the southeastern city of Nice and roughly equivalent to the modern arrondissement of Nice.

La Fontaine Park is a 34 ha urban park located in the borough of Le Plateau-Mont-Royal in Montreal, Quebec, Canada. Named in honour of Louis-Hippolyte Lafontaine, The park's features include two linked ponds with a fountain and waterfalls, the Théâtre de Verdure open-air venue, the Calixa-Lavallée cultural centre, a monument to Adam Dollard des Ormeaux, playing fields and tennis courts.

Tonga, Cameroon is a town and commune in Cameroon.

The Opéra de Nice is the principal opera venue in Nice, France, which houses the Ballet Nice Méditerrannée and the Nice Philharmonic Orchestra. It offers three types of performances: operas, ballets and classical music concerts.

The Musée Matisse in Nice is a municipal museum devoted to the work of French painter Henri Matisse. It gathers one of the world's largest collections of his works, tracing his artistic beginnings and his evolution through his last works. The museum, which opened in 1963, is located in the Villa des Arènes, a seventeenth-century villa in the neighborhood of Cimiez. 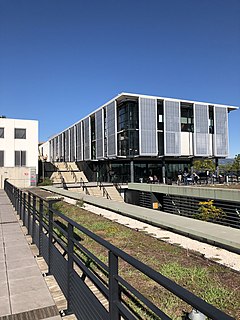 Polytech Nice Sophia is a French engineering university based in the middle of the Sophia Antipolis technology park. 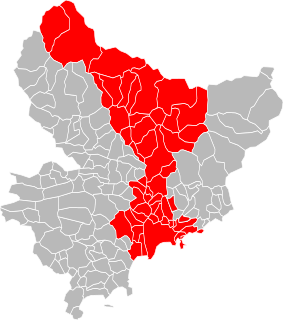 Métropole Nice Côte d'Azur is the métropole, an intercommunal structure, centred on the city of Nice. It is located in the Alpes-Maritimes department, in the Provence-Alpes-Côte d'Azur region, southeastern France. It was created in December 2011, replacing the previous Communauté urbaine Nice Côte d'Azur and the communautés de communes of les stations du Mercantour, La Tinée and Vésubie-Mercantour. In 2013 the commune Coaraze left the métropole, and in 2014 the communes Bonson, Le Broc, Gattières and Gilette joined it. In January 2022 the communes Drap and Châteauneuf-Villevieille joined the métropole. Its area is 1479.7 km2. Its population was 545,873 in 2018, of which 341,032 are located in Nice proper.

The Col d'Èze is a mountain pass in the Alpes-Maritimes department of France. It is located between Nice and Monaco, near to La Trinité.

The siege of Nice took place between 15 March 1705 and 4 January 1706 as part of the War of the Spanish Succession. It pitched the forces of Louis XIV of France against those of Victor Amadeus II of Savoy – the latter were led by the marquis of Caraglio.

The canton of Nice-7 is an administrative division of the Alpes-Maritimes department, southeastern France. Its borders were modified at the French canton reorganisation which came into effect in March 2015. Its seat is in Nice.

The Meeting International de Nice "Nikaïa was an annual one-day outdoor track and field meeting at the Stade Charles-Ehrmann in Nice, France. First held on 16 August 1976, it was held in June or July each year until 2001, when the meeting folded due to financial reasons. It was part of the IAAF Grand Prix circuit from 1998 to 2001.