The Theatre du Soleil was founded as a theatre collective in 1964, in the midst of the cultural turmoil that was sweeping the Western world. [1] In the midst of the Cold War, nuclear warfare felt imminent while the whole of Europe was slowly recovering from the destruction of World War II. In 1965, Charles de Gaulle was re-elected President of France in the first election with direct popular vote for the office. The year 1968 was a watershed for protests and turmoil around the world, and was characterized by rebellion against conventional culture, huge political demonstrations, and labor strikes in France involving 11 million workers, students, and far-left politicians. [1] It was in the middle of this period of uncertainty, changing cultural attitudes, and disillusionment that Mnouchkine, a theatre student, [2] started Le Theatre du Soleil with her peers who were interested in creating original theatre.

1970–1971: Le Theatre du Soleil moves to their permanent base, la Cartoucherie, a former munitions factory on the outskirts of Paris

1978 Molière, film directed by Ariane Mnouchkine and starring Philippe Caubère, presents the biography of Moliere. It was in competition for the Palme d'Or at Cannes in 1978.

1981–84: Translated works of Shakespeare are presented in cycles, including Richard II and Henry IV Parts 1 and 2

May 4 – Company tour begins in Nantes

2018: Kanata (directed by Robert Lepage, with the troupe of Théâtre du Soleil)

Founded by Ariane Mnouchkine, The Theatre du Soleil was founded in the 1960s as a reaction against traditional theatrical institutions in France. [5] Although they have never presented a formalized mission statement, from their inception they have been characterized by a commitment to long-term collaborative rehearsal processes; the merging of a wide variety of art forms both Western and non-Western, including music, dance, and puppetry; actively communicating and mingling with their audiences; and maintaining a large, hierarchy-free company that does not live together but spends a lot of time working together, and equally shares the work of creating their productions. Company members describe working for the Theatre du Soleil as "a style of life", [6] while a reviewer for The New York Times said of their production Les Ephemeres: "The aim here is not to shape life into taut dramatic form but to present lived experience intimately and without evidence of artists' interpretation and manipulation." [6] Mnouchkine summarized the philosophy of the organization as "Theatre du Soleil is the dream of living, working, being happy and searching for beauty and for goodness….It's trying to live for higher purposes, not for richness. It's very simple, really." [7]

The company's productions have included both re-imaginings of classics of Western theatre such as Shakespeare's Richard II and Moliere's Tartuffe, [8] but the company is equally well known for their original works. The collective, consisting of 70 members as of July 2009, [6] takes the concept and direction for their original productions from founder Ariane Mnouchkine, and works together in a collaborative rehearsal process that stretches out over many months to create a finished performance event. For example, their six-hour-long 2005 production Le Dernier Caravansérail (Odyssées) was based on a compilation of letters and interviews collected by Mnouchkine and her colleagues from refugee camps from around the world, while Les Ephemeres in 2009 was based on nine months of improvisations stemming from Mnouchkine's question: What would you do if you found out that all of humanity would die out within three months? [6]

At other times, they provocatively, directly comment on contemporary events, such as their production of Tartuffe in which the title character was presented as an Islamic zealot at a time when there was a movement in France against foreign immigration. [9] They have drawn inspiration from non-Western cultures, such as when they used bunraku-style puppetry in their production Tambours sur la Digue. [10] The company's emphasis on movement and physical theatre is in part due to Mnouchkine's study under Jacques Lecoq. [11] Their performances also frequently feature direct contact between the actors and the audience members, whether through a dressing and makeup area that is open to the public's view [12] or lunch for both actors and audience served at intermission. [6] Beyond their production process, part of the company's philosophy does not include communal living, although this is part of its legend, and a very subtle if not complete lack of hierarchy for every member of the organization. All employees, whether actors, administrators, or technicians, are paid the exact same wage, and must sometimes go without a salary for months when the company is not performing and earning income. The company lives together in shared housing and equally shares the work of cooking, cleaning, and otherwise maintaining their living space. In addition, all performers do technical work on productions, such as maintaining moving set pieces for Les Ephemeres. [6]

The Theatre du Soleil's premiere performance was in 1964–65 with Les Petits Bourgeois. [3] The company's first widely recognized production was in 1967 with Arnold Wesker's 1957 play The Kitchen . They continued on to form a theatre collective and produce their first major success 1789, a show about the French Revolution. Their performance suggested "the Revolution was subverted by those more concerned about property than justice". [13] Another of the company's most famous works was Les Atrides. This was made up of Euripides' Iphigenia at Aulis and Aeschylus' The Oresteia. The production took over two years to mount, played in numerous countries including the United States and Germany, and integrated several forms of Asian dance and drama. In 2005, Le Theatre du Soleil presented Le Dernier Caravanserail (Odyssees) or The Last Caravansary (Odysseys).

One of the company's most recent major works was their production of Les Ephemeres created and directed by Ariane Mnouchkine. The show premiered at the 2009 Lincoln Center Festival. Les Ephemeres is centered on the river of time with its events both past and present. The Village Voice characterized the show's theme as "To go with the flow, to accept the fact that time is the great devastator. Tout passe, tout casse, tout basse, says a French proverb: Everything passes, everything breaks, everything sinks." [14] The performance is split in two three-and-a-half-hour-long sections with the full run time just over seven hours long.

While Ariane Mnouchkine, acknowledged as the founder of the troupe, regularly acts as the company's concept creator and director, a number of her fellow students were also her collaborators in the initial founding of the company, including: [5]

Senior members such as Mnouchkine are not given preferential treatment. Mnouchkine, for example, refused to be interviewed alone for a New York Times article, [6] although individuals such as Hélène Cixous (playwright) and Jean-Jacques Lemetre (composer and musician) repeatedly fulfill specific production roles and have done so for many years. [15] 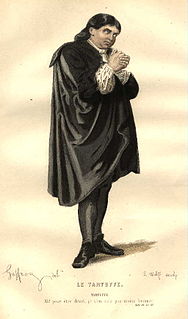 Tartuffe, or The Impostor, or The Hypocrite, first performed in 1664, is one of the most famous theatrical comedies by Molière. The characters of Tartuffe, Elmire, and Orgon are considered among the greatest classical theatre roles.

École internationale de théâtre Jacques Lecoq is a school of physical theatre located on Rue du Faubourg-Saint-Denis in the 10th arrondissement of Paris. Founded in 1956 by Jacques Lecoq, the school offers a professional and intensive two-year course emphasizing the body, movement and space as entry point in theatrical performance and prepares its students to create collaboratively. This method is called mimodynamics. The school’s graduate list includes renowned figures of stage such as Ariane Mnouchkine of Théâtre du Soleil, Steven Berkoff and Simon McBurney of Théâtre de Complicité among others. 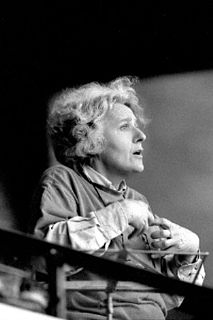 Ariane Mnouchkine is a French stage director. She founded the Parisian avant-garde stage ensemble Théâtre du Soleil in 1964. She wrote and directed 1789 (1974) and Molière (1978), and directed La Nuit Miraculeuse (1989). She holds a Chair of Artistic Creation at the Collège de France, an Honorary Degree in Performing Arts from the University of Rome III, awarded in 2005 and an Honorary Doctor of Letters from Oxford University, awarded 18 June 2008. 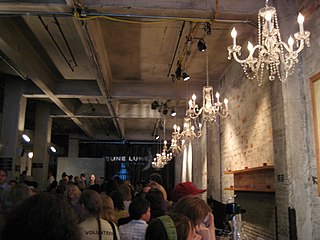 The Theatre de la Jeune Lune was a celebrated theater company based in Minneapolis, Minnesota. The company, in operation from 1978 to 2008, was known for its visually rich, highly physical style of theatre, derived from clown, mime, dance and opera. The theatre's reputation also stemmed from their reinvented classics and their productions of highly ambitious original work.

Pierre Curzi is an actor, screenwriter and politician in Quebec. He is a former Member of the National Assembly of Quebec (MNA) for the riding of Borduas in the Montérégie region south of Montreal. Elected under the Parti Québécois (PQ) banner, he later sat as an independent. 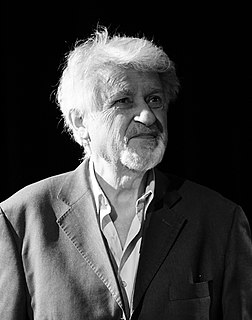 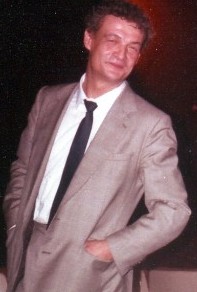 Philippe Léotard was a French actor, poet and singer.

Daniel Mesguich is a French actor and director in theater and opera, and professor of stage acting school.

Shahrokh Moshkin Ghalam is an Iranian modern dancer who lives and works in Paris. A graduate in history of art and theatre from the Paris 8 University, he is a choreographer, actor and director. He is also the founder and former artistic director of Nakissa Art Company. He is the first Iranian to be part of the prestigious Comédie-Française troupe. 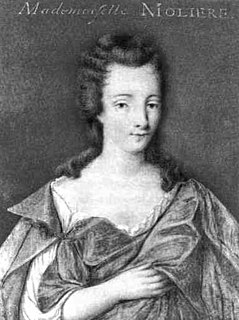 Armande-Grésinde-Claire-Élisabeth Béjart was a French stage actress, also known under her stage name Mademoiselle Molière. She was married to Molière, and one of the most famous actresses in the 17th-century.

Beejan Land is an Australian actor and playwright. He graduated from National Institute of Dramatic Art and Newtown High School of the Performing Arts

Brontis Jodorowsky is a Mexican-French actor and theatre director. He is the son of Chilean-French writer, director and actor Alejandro Jodorowsky and French actress Bernadette Landru. 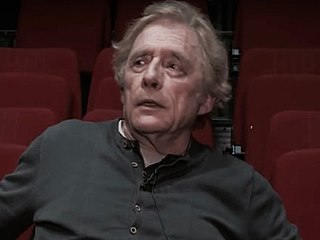 Jean-Pierre Vincent was a French theatrical actor and director.

Isaac Alvarez was a French actor, mime, and choreographer. He founded the École du théâtre du mouvement in Paris in 1956 alongside Jacques Lecoq. In 1981, he founded the Théâtre du Moulinage in Lussas.