Théo Lefèvre was elected to the Chamber of Representatives in 1946 and served until 1971,when he became a member of the Belgian Senate (1971-1973).

In 1961,after the fall of the fourth government of Gaston Eyskens and the following snap election,Lefèvre became Prime Minister of a coalition government with the Belgian socialists. During this period,the Belgian army intervened in Congo (Operation Dragon Rouge). His government encountered heavy opposition and the planned health care reform only succeeded due to large concessions made by the government. Having become unpopular,Lefèvre lost the elections of 1965 and was excluded from the next government,which was a coalition government of Christian-democrats and liberals.

Pierre Charles JoséMarie,Count Harmel was a Belgian lawyer,Christian Democratic politician and diplomat. Harmel served as the prime minister of Belgium from 1965 to 1966.

Gaston François Marie,viscount Eyskens was a Christian democratic politician and prime minister of Belgium. He was also an economist and member of the Belgian Christian Social Party (CVP-PSC). 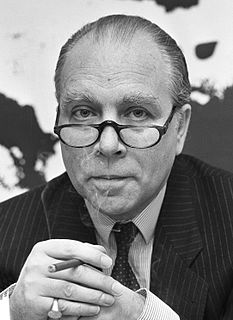 Marc Maria Frans,viscount Eyskens,known as Mark Eyskens,is a Belgian economist,professor and politician in the Christian People's Party,now called Christian Democratic and Flemish,and briefly served as the prime minister of Belgium in 1981.

Paul Emile François Henri Vanden Boeynants was a Belgian politician. He served as the prime minister of Belgium for two brief periods.

Jean Pierre Duvieusart was a Belgian Catholic politician of the PSC-CVP who served as prime minister of Belgium from June to August in 1950.

Gaston C. S. A. Geens was a Belgian politician and minister-president of Flanders. 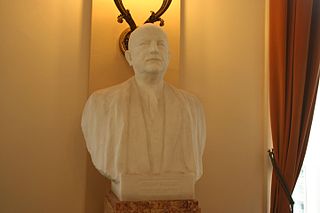 Joseph Clovis Louis Marie Emmanuel Pholien was a Belgian Catholic politician and member of the PSC-CVP. He was born in Liège,and volunteered to serve with the Belgian army during World War I,being commissioned as a first lieutenant. He was the minister of Justice under Paul-Henri Spaak from May 1938 to February 1939 and was the prime minister of Belgium from 16 August 1950 to 15 January 1952. In 1966,he became a minister of State.

Jean (Jan) Marie Joseph,Baron Van Houtte was a Belgian politician who served as the prime minister of Belgium from 1952 to 1954.

Frank Swaelen was a Belgian Christian Democratic politician and member of the Christian People's Party (CVP). He was born in Antwerp. In 1968,he became a member of the Chamber of Representatives. He became Minister of Defence in 1980 but one year later he became the national chairman of the CVP,which he remained until 1988,when he became the President of the Senate.

The Christian Social Party (PSC-CVP) was a Christian-democratic political party in Belgium that existed from 1945 until 1968,when it split along linguistic lines.

Piet Vermeylen,was a Belgian lawyer,and Belgian Socialist politician and minister. He was the son of the Flemish politician August Vermeylen.

The Second School War was a political crisis in Belgium over the issue of religion in education. The conflict lasted between 1950 and 1959 and was ended by a cross-party agreement,known as the School Pact,which clarified the role of religion in the state. It followed a crisis over the same issue in the 19th century,known as the First School War.

Paul Victor Antoine Struye was a Belgian lawyer,politician,and journalist,notable for his writings during World War II. A native of Ghent,Struye served in the Belgian Army during World War I. He qualified as a lawyer in the years after the war and also worked as a journalist at the Catholic newspaper La Libre Belgique. A royalist and patriot,Struye was soon attracted to the Belgian resistance during World War II and was influential once La Libre Belgique became an underground newspaper. His diary of life under occupation and writings on public opinion are important historical sources on the period. After the war,Struye entered politics in the Christian Social Party as a senator and held the portfolio of Minister of Justice (1947-1948). He subsequently held the post of President of the Senate on two occasions.

Harold RenéCharles Marie,comte d'Aspremont Lynden was a Belgian cabinet minister,politician of the PSC-CVP and Cavalry Lieutenant-Colonel. He is also notable as Belgium's last Minister of African Affairs (1960-1961),serving as such in Gaston Eyskens' third cabinet.

An orange–blue coalition is a type of governing coalition in Belgian politics that brings together Liberal parties and Christian democratic/humanist political parties. These coalitions are also termed Blue–Roman,corresponding to the colors of the liberal parties,and the Roman of the Roman Catholic Church for the Christian Democrats.